Possible ideas for the development of armor in the game.

Cool suggestions, but I will stay away from full plate armor for now. I know I am a little inconsistent in the choice of period regarding some items, but hey, thats the beauty of making your own game :) I just paint what I like most .)

Regarding the combat value of certain items: I’ll stick to the topic ART in this thread. Only thing I can say is that “a lot” will change with the perk rework. We will inform you guys ahead of time as always. Apart from that: weapon stats will be adjustet according to player feedback and our own testing, so nothings set in stone.

I was wondering: do you have plans at any point to make short/tall characters visibly short/tall on the screen? I know there’s a short traits, and I know Hedge Knights are frequently described as massive. Do you plan on making them have slightly different scales in size at any point, or will you leave the traits text-only?

As much as I would like to do that, I think its not possible. I would have to create multiple image sets for each armor for each body (tiny, fat etc…) which would mean a lot of work for me.
Othrwise we could only scale the images to be smaller or bigger, which tends to produce blurry images and loss of detail.
So, thats not gonna happen unfortunately.

Also, since you’re working on unique weapons soon: I was thinking that the flamberge would make a great rare/unique two-handed sword. I could also see a falcata being used as a rare Military Cleaver. And I’d definitely point to Persian weaponry for rare weapons in general, as they’re… they’re just gorgeous weapons.

I deliberately dodged the flamberge until now. They look awesome, but also feature a very distinctive late medeival look. Again: never say never, but theyre not in for now.
I like the Falcata idea and by coincidence I am painting the cleavers as we speak. So Il will make one looking like a falcata :)
Regarding the persian weaponry, we still have the skeleton rework pending. They will introduce a set of ancient weapons. even though theyre not persian, at least theyre somehow exotic looking.
Here are some of them: 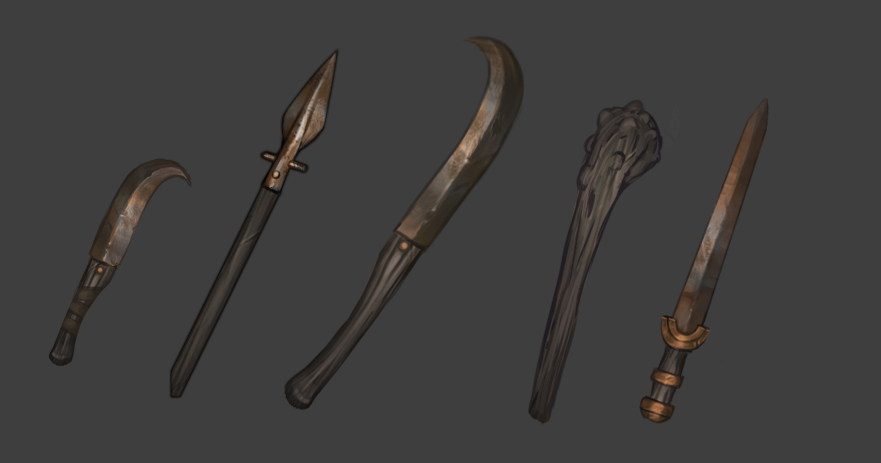 I dunno if you can make it look good on the screen, but a sword that looks like Damascus Steel

The idea was brought up before. I could try, but I think it would just look noisy in the tiny images we are using. We’ll see…