10kg shields??? Really?? Sorry, but that just not viable thing, not for footman.

Yes really. Although that’s somewhere on the upper end of the extreme of course and was given as a example. Average Greek aspis shield weighted about 7-8 kg.

Biggest one-handed bastard swords ~1,5kg max, spears about ~1kg, that is average milk packaging, and you dont need to hold this up all the time, just place it on shield/clamp with elbow/etc.

You do need to hold it if you are facing enemy attack. Even if you are just threatening him with you stance, your spear needs to be in position to strike.

Btw: “spear wall” and “shield wall” are bit of a contradiction because in literature they are used to describe the same thing. Which is (relatively) tight linear formation made of warriors with shields and at last some of them using spears, which practically all ancient armies did. Spear was main battlefield weapon safe few exceptions. In real life shield/spear wall is not ability or stance, it’s description of formation. And pretty ambiguous at that.

Therefore again, you can’t take that ability in the game too literary.

Even ridiculusly long renessance pikes may be just supported by the ground, like on your photo.

That position on the photo is actually for receiving cavalry charge and is pretty uncomfortable and tiring. Soldier have to kneel slightly to the front, with back foot resting on a pike but to hold it firmly in the ground while right arm is on a sword hilt ready to unsheathe it in case pike brakes from impact of enemy horsemen manages to get through pike points.

In foot engagement those pikes would be held horizontally above your shoulders, roughly at the height of your face. 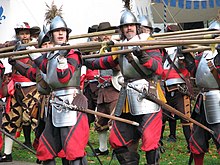 Idea is that standing in a formation facing enemy formation makes you more vulnerable then when facing single opponent in a duel. Yes, your buddies next to you can parry attacks against you, but they face 3 guys themselves. Everybody is more vulnerable because attack can come from more then one opponent and direction.

When i say about miss hits, i mean completly miss. When you placing blow, you tired yourself releasing something energy, and opponent(if not completly evade) must deal with that energy, not just ignore it – also get tired from parry, and, if not have shield or sword, suffer big damage to weapon.

Nothing suggest that enemy does nothing. There’s even skill involved which is called melee defense and if my memory does not fool me, there is even little animation in combat where enemy icon moves slightly during “miss”.

If you watch video I posted you actually see that most of the attacks do miss. But you also see that combatants does not stand passively on the spot.

Really?? I couldn’t hit just through first line, you should avoid it. I make some diagram, just for you:

Pikes were actually between 3-8 meters in length. Guy on your diagram would be perfectly safe. 2.5 meters is length of average spear.