So, I wanted to know: when we enter a noble’s castle in-game, will their banners be floating on the town screen as well as the world map?

The Banner will definitely fly on the worldmap, so you can see what Faction controls the Settlement or if it is independent.
In the Village screen there will also be a clear indicator of the Settlements allegiance. In what form exactly remains to be seen.

The current state fo the Settlement will be represented for the most part by the attached locations. If all of them are lying in ruins, the settlement is doing poorly.
If this isnt obvious enough we will think about more visual clues for the settlements current condition.

I cant give you more village art right now, but heres a little teaser for the human factions:
(HOLY MOLY that IS a horned helmet!) 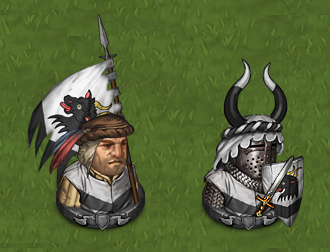