We take a break from looking at things that make your life harder, to take a look at things that make your life easier this week. The upcoming ‘Beasts & Exploration’ DLC will add a bouquet of new weapons. Some of them will fill gaps in the progression of existing weapon types, while others are hybrid and niche weapons to create new builds and tactics with. And all of them will add more variety to human opponents, like brigands. Just keep in mind that details may still change depending on how playtesting goes. Let’s take a look!

First off, several of the new weapons are designed to fill gaps in the tiered progression of individual weapon types. The Longsword is a lower tier version of the Greatsword, but no less versatile. It allows us to more gradually introduce two-handed swords with enemies, and it allows you to use a less costly alternative earlier in the game. Similarly, the Two-Handed Wooden Hammer is a lower tier version of the existing Two-Handed Hammer. And while previously the Orc Berserker Chain was the only two-handed Flail in the game, there’s now two tiers of human two-handed Flails as well.

Maces now come in massive two-handed variants. They excel in single-target damage and crowd control, and like their one-handed cousins, they apply a lot of additional fatigue damage. Receiving a blow from a weapon like this will leave anyone dazed and gasping for air, and this is reflected in the ‘Cudgel’ skill applying the new ‘Dazed’ effect. A dazed character will have their maximum fatigue, initiative and damage output reduced. The other skill of two-handed maces is called ‘Strike Down’ and will stun a target for a whole 2 turns, instead of just 1 turn with one-handed maces. This also plays into a new perk which we’ll explain in another dev blog. 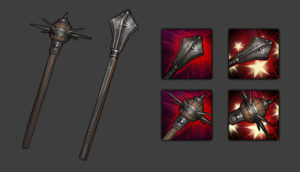 The new Polehammer is the polearm variant of the Warhammer, a weapon designed to neutralize heavily armored targets. With two tiles of range, a Polehammer can be used from behind the frontline, and outside the range of most other melee weapons, to batter, deform and rip enemy armor. Against unarmored or lightly armored targets, however, other polearms perform better. 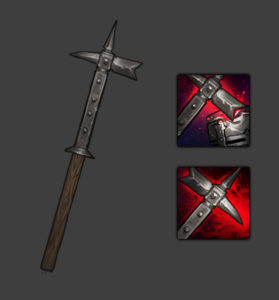 Even more defense-oriented than a pike, the two-handed Spetum is used like a cross between pike and spear in the game. It is a specialized polearm that is less damaging than the pike, but can be used to form a more deadly yet more fatiguing ‘Spearwall’ than with a one-handed spear. Particularly useful against beasts. 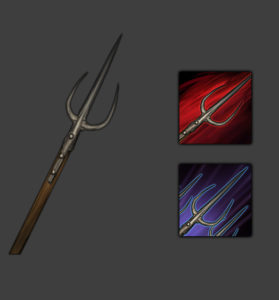 Throwing weapons also get some love with the new Throwing Spear. Larger than a Javelin, it’s a consumable item similar to the Throwing Net and designed to take out shields from afar. 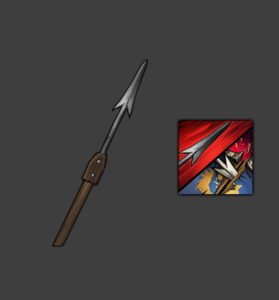 A curious hybrid between club and spear, the Goedendag is a two-handed weapon that enjoys popularity with militia and similar non-professional outfits. It comes with the ‘Thrust’ skill of the spear, making it easy to hit with, as well as the ‘Knock Out’ skill of Maces, enabling the user to incapacitate their opponents. 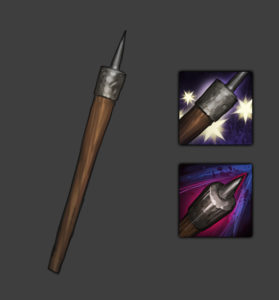 The Three-Headed Flail, also called Ochsenherde, is a less common weapon. It works the same as any other one-handed flail in the game, except for one detail: Every attack is split into three separate ones, one for each of the striking heads, and each head can hit or miss, and hit body or head, separately. That’s a good thing if you’re looking for consistent damage and a high chance to hit the enemy at all, for example to apply the Poisoned effect or because you’re fighting a fragile enemy with high defenses. On the other hand, this weapon will split damage between head and body armor even more so than other weapons, making it ill-suited if you’re looking to brute-force your way through enemy armor. 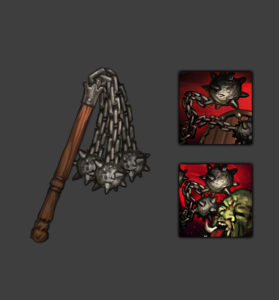 Another uncommon weapon is the Fencing Sword; a light and elegant blade that favors a swift and mobile fighting style. It comes with a skill unique only to this weapon: ‘Lunge’. Using the ‘Lunge’ skill, the user will dash towards a target two tiles away, followed immediately by a precise thrusting attack to catch the target unprepared. Lunge gets a damage bonus scaling with the user’s initiative; the quicker the user, and the less armor weighing them down, the more damage they do. With a fencing sword, a combatant gains a lot of mobility, dancing between enemies to make precise strikes if any opening should present itself. 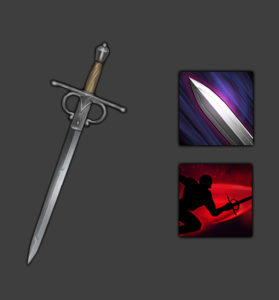 There’s even more new weapons coming, both legendary ones to be found by exploring the wilds, and craftable ones, but we don’t want to spoil these – you’ll just have to find them for yourself!