Cheers icemelon, I don’t get a reason to draw in retail, and I nerd-out on whatever I’m playing lol.

PsenBattle stated there won’t be any new races before it releases, but I think many people would support post-release content and mods, so I would instead put that suggestion towards fleshing out the game with more of the tolkien-esk (the cthulian would also be pretty sweet) come release.

Again though I’d love to see the Beast faction expanded, currently we have Ghouls and Direwolves, but both are pretty swarm-like and I think there’s room for (to borrow from dwarf-fortress) lone megabeasts that roam around being dicks and requiring a full early/mid/late game squad to take down. Miles Cameron’s The Red Knight book depicts a universe where mercenaries and knights roam around slaying beasts of the forest, and I think there’s something very medieval about going on a quest to slay a large beast, like a nordic or arthurian tale. 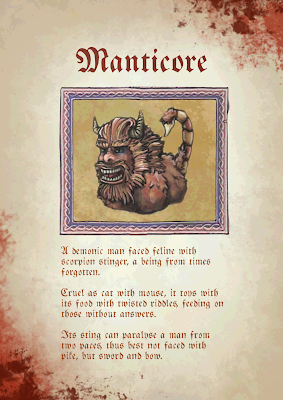 I also think a nice Wyvern type dragon would be pretty sweet, i.e; A scaled beast resting on hind-legs and the forearms of its leathery wings. Its amassed treasure bait to lure tasty morsels in to be roasted and gnawed.