In Battle Brothers you face off against a wide variety of factions, each with unique units, equipment, skills, tactics and AI. To prevail you have to constantly adapt and think on your feet.

The undead are long deceased bodies and remainders of once living creatures brought back to life by dark powers. The creatures of the undead faction are numerous and vary in combat ability, tactics and equipment. The body of their forces is usually compromised of zombies and skeletons but they also field elite troops like heavily armored fallen heroes, incorporeal lost souls and powerful reanimated lords. The undead often appear with a leader that is directing their soulless and mindless bodies in the right direction. This can be a necromancer, still a human being but corrupted by sinister powers, a vampire lusting for the blood of the living, or something even worse. 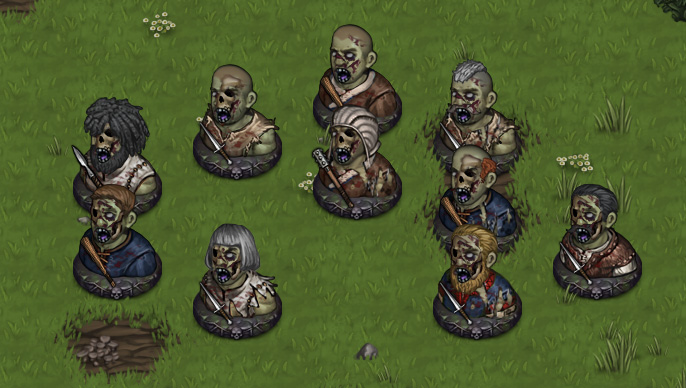 The undead have some special traits that govern how they fight in combat. They have no stamina and do not accumulate any fatigue. With a few exceptions, the undead are also immune to morale effects, such as panic, and will never flee the battlefield. On the upside, most of them are rather slow and not all of them act particularly intelligent in battle.

When fighting the undead, players have to watch their fatigue closely as the undead to not get tired like your Battle Brothers. Many undead can be resurrected again and again, which can have battles last a long time, straining fatigue until all humans are so tired that the undead finally overcome them despite their supposed individual weakness.

As long as humans remember there have been tensions with the wild orc tribes that roam the surrounding lands. Orcs live as nomads, constantly on the move to support themselves by hunting, gathering and raiding anyone weaker than their tribe. Life for an orc, then, is to a large part establishing dominance over others and taking things for him or herself.

In Battle Brothers, orcs are physically stronger than humans. An adult orc towers a human and has the strength to use weaponry and wear armor with great effect that would quickly tire out any human. With their strength, they also gain a percentage damage bonus to every attack – less for young orcs , and more so for adult ones. While orcs are subject to fatigue and morale, just like your Battle Brothers are, they have plenty of both, and it takes a while for an orc to run out of steam or realize that a battle has turned against him.

Orcs focus entirely on the offense, where they excel. They use their skills to crush the player’s battle line with raw force and have it quickly dissolve into a chaotic frenzy where they generally have the upper hand. For this reason, meeting an orc warband head-on in open battle is usually a bad idea and will leave you at a disadvantage. On the other hand, orcs neglect defense; while some of them will carry shields, they seldom make active use of them, prefering instead to attack. Due to their reckless fighting style and just physically being big targets, they’re also easier to hit than other opponents.

Villages and the bigger towns are a collective term for all human civilian settlements that are located across the world map. Villages are mostly inhabited by farmers, hunters, local craftsmen and small time traders. The people of the villages usually live off the surrounding land and by selling their produce and wares on bigger markets in nearby villages or towns.

In case of an urgent threat nomal townsfolk are gathered hastily and equipped with whatever weapons and armor are available. These ad-hoc militia forces are not trained soldiers and lack equipment and combat experience. Nevertheless, they will fight fiercly to protect what little they have and to protect those dear to them. Militia forces can be gathered when a hostile party is sighted close to a settlement and disbanded again after the threat disappeared. Local leaders will attempt to hire mercenaries for protection so the player will often find work around these settlements. 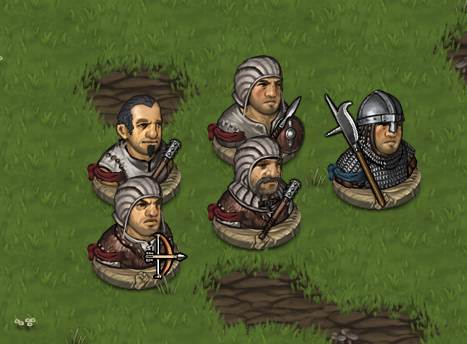 Noble houses also come with their very own coat of arms. We dove deep into medieval heraldry to make the coats of arms realistic and believable, but we also took a bit of artistic licence to make them easier to read and more catchy. 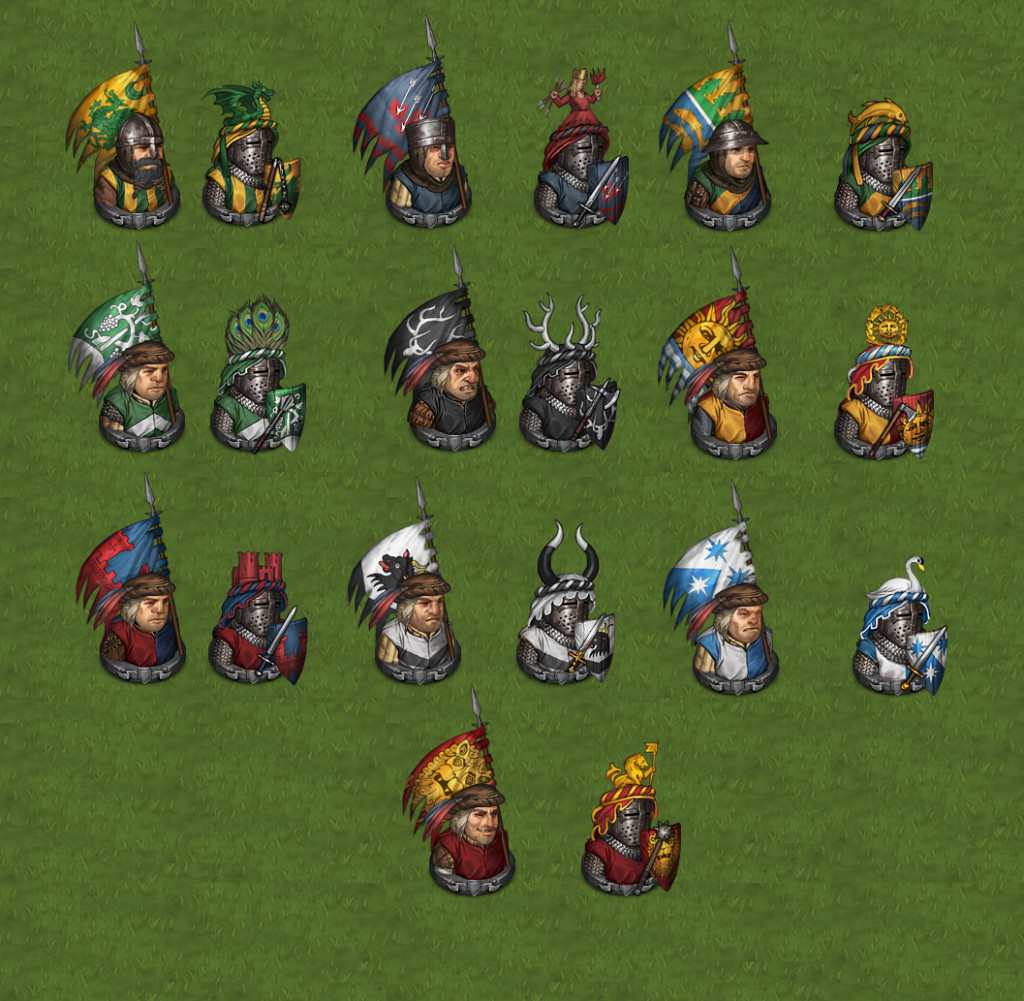 The beast faction is not a typical faction as it is not united within itself. This faction consists of all kinds of dangerous and mystical creatures that roam the lands independently and threaten its inhabitants.

The first creature that is already in the game is the Direwolves. These huge wolflike creatures always travel in packs and are not hindered by darkness at night. They are extremely fast and although they do not use weapons or armor they are absolutely deadly when using their fangs and claws.

Goblins are technically just one half of a larger faction, the greenskins, with the other half being the orcs. However, both orcs and goblins are highly autonomous and you’ll only see them work together on rare occasions.

Goblins are a lot smaller than both orcs and humans, and appear to be physically weak at first sight. Due to their lack of strength they have developed a completely different approach to battle from their larger cousins. Instead of brute force they rely on ambushes, hit-and-run attacks, wit and dirty tricks. Goblins employ many means to hinder the enemy’s movement and once the enemy is incapacitated they engage to wear their opponents down.

When fighting goblins a solid battle line will just get harassed from afar until it is safe for the goblins to engage the worn out survivors in close combat. The player has to be quick to catch the swift greenskins and then pin them down in melee where they can not use their ranged weapons. Also, goblins are not known to be the most brave fighters around. To keep them fighting there is often a leader around, keeping morale up by all means neccessary, such as like swinging a whip at those who fall back. Taking care of him can easily scatter a band of goblins.

In a medieval world there are always those who have fallen out of society for whatever reason. Some are plain criminals, some are desperate and close to starving others are just looking for freedom far from local authorities. All these characters live in the woods, hills and wilderniss around the human settlements and are looking for a way to survive by their own means.

These outcasts usually avoid direct confrontation and prefer to ambush trade caravans and lone travelers along the roads. Most of them have gathered in small groups and built some form of hideout where they take their robbed goods.

Bandits may not be very well fed and equipped but a life of hardship has made them tough and cunning fighters that will use any dirty trick and advantage they can get to save their hide.