Hey Jikma,
awesome stuff, you obviously put a lot of thought and work into this. Your ideas really sound like cool additions to the game. I especially like the colored gambesons, they have a nice medieval touch. Don’t worry about the quality of the assets, they are pretty good and have a cool low-power style.

We actually considered a layered system to freely compose armor earlier in the development. This makes sense, as real life armor works exactly the same way and it would allow a lot of visual variety.
We finally decided against it because of several reasons. First of all you would have to come up with a pretty complex UI screen to track all the different armor layers and the UI is already cramped.
Secondly it would be difficult to implement the system into the game design in a meaningful and understandable way. How would you calculate armor points if someone choses to wear a mail shirt without padding underneath? In real life the protection value would suffer a lot. Regarding armor values we don’t have a lot of levers to pull. Theres basically just armor points and fatigue malus. The system would be a bit boring if you just stack up armor points for each additional layer.
So we would need more levers, like different protection values for cuts, blunt weapons etc.
I think this would be cool, but gets way too complicated for our scope of the game.
Thats why we dont have something like this in the game.

To sum this up I would have loved to implement this in a different way: By adding a “vanity” slot to the UI where you put surcoats, scarfs, hoods or whatever you want to wear over your armor. These items wuld just change your appearance and have no gameplay impact.

Regarding the Blacksmith, thats a cool idea and I think you could somehow make it work within the existing game mechanics.

By the way, here are painted helmets I prepared for the upcoming 1.1 patch: 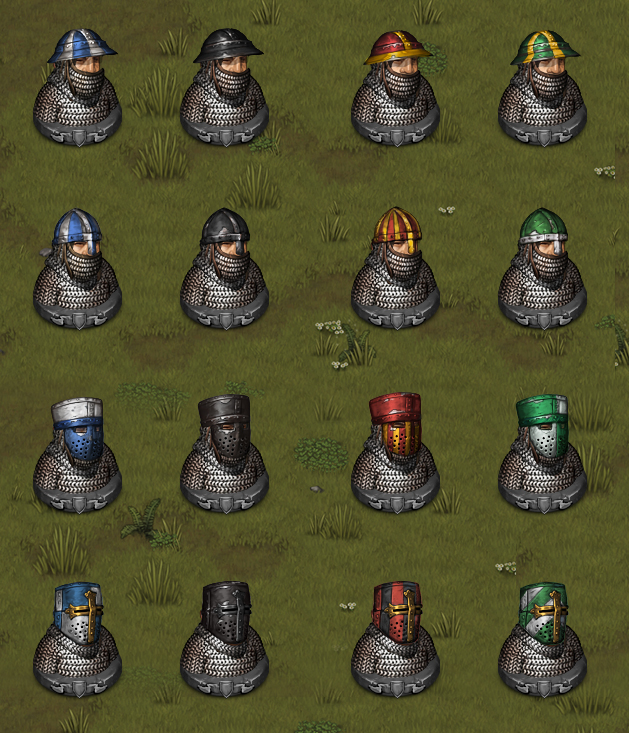