Here we go – the new UI is now live for the beta branch of Battle Brothers!

All of the UI received a new look of wood, iron and paper that better contributes to the game’s atmosphere. Several lingering UI bugs have been fixed, and the UI as a whole should be more responsive and make for a much smoother experience playing the game. 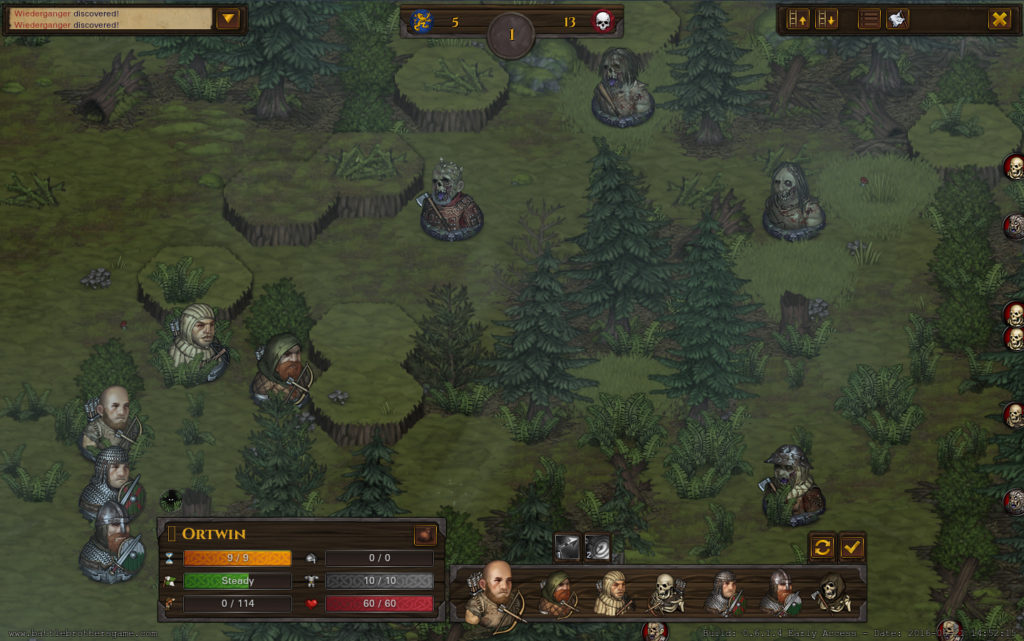 You can now hire up to eighteen men for your company, and while the maximum number of characters you can lead into battle is, for reasons of balance and usability, still twelve, you now also have a reserve roster to draw from. Characters can be dragged & dropped easily between combat duty and reserve duty, and indeed placed at the exact spot of the formation you want them to be in order to best fulfill their roles.

In the lower right corner of the inventory screen you now have three rows with 9 slots each. The lower row is your reserves; characters placed here do not take part in battle. The top two rows are your front and back battle lines, allowing you to place archers in the back and build a sturdy shieldwall in front. Note that formations may be disabled for certain events, like when ambushed.

Having more characters available with the reserve roster allows you to rotate injured characters in and out of active duty (especially with the more complex injury mechanics we’re going to introduce soon), always have new recruits gather experience so that losing people in battle doesn’t hit you quite as hard later on, and to more easily keep specialists for fighting certain enemies around (especially as we overhaul the perk trees). Having a deep roster is also a matter of cost, of course, so it’s up to you to decide where best to funnel your crowns.

Finally, this new version also comes with a new music track playing on the worldmap, as well as movement sounds for different types of ground.

Redoing the UI for Battle Brothers wasn’t just a cosmetic change, as we’ve entirely replaced the underlying UI library. There were a couple of issues we wanted to solve; there was a tendency for mouse clicks to be lost, the UI could feel very sluggish at times, and some people experienced compatibility issues when starting the game. Because this library ceased to be developed and we were basically stuck with all these problems, we opted to replace the library altogether.

A change as extensive as this will invariably introduce a couple of new issues. Because we don’t want to ruin anyone’s game, we’ve decided to iron out these issues in a separate beta branch together with your help. Please consider signing up for the beta (instructions below!) and report any issues you find so we can fix them and make further improvements based on your feedback.

The UI isn’t final as is, but it’s certainly ready to play with. There’s still room for improvement, regarding both usability and colors, and we’re still going to refine the look over the course of the beta. Once everything works smoothly again, we’ll merge the new UI into the live branch of the game.