Casey Hollingshead, the game’s original writer, has released a short story set in the grim medieval world of Battle Brothers as an eBook on Amazon. Its title: “Wolfmother”. 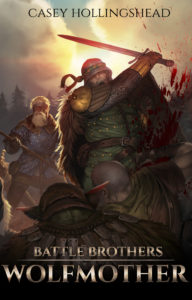 A leader. A kid. A scapegrace. A fighter. A nobleman. A scholar. One agreement. Led by a battle hardened mercenary captain, a group of sellswords trek up a mountainside to complete a contract. If you enjoyed the writing in Battle Brothers and want for more, check out his book here.

Also, it’s anniversary time! One year ago, Battle Brothers graduated from Early Access and was released a full game into the world. To celebrate this occasion, Battle Brothers is on sale with a 50% discount for the next two days. Hurray!