Love the idea of a broken Glaive paul!

Weeeeeee neeeeeeeeeed a Murmillo and Myrmidion though, with net and trident/>

And to be honest, a slinger or two would be excellent

This helmet would be amazing too… 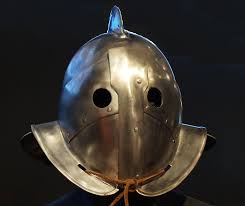 I would be suprised to find such a helmet on an ancient dead soldier. The classes of gladiators fighting against each other in the arena were equipped with weapons and armor to have strenghes as well as weaknesses compared to each other to provide for a somewhat fair fight. After all these arena fights were no slaughterfests atleast when it came to gladiators fighting against each other. They were meant to entertain the people. To train a gladiator was an expensive and longtime investment if you believe modern scientific investigations. Most of the time both gladiators would leave the arena alive.
But aside from this. Take a look at this helmet. You would not want to wear it. Your field of view is very restricted. You will not be able to hear very good which worsens your ability to know what is going on around you even more. And then there is the fully closed part right in front of your nose and mouth. You would have a hard time moving around with this helmet for a prolonged time let alone fighting while you get less and less fresh air. This is why military grade helmets of that era looked like this: 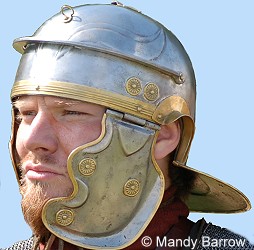 Yes, the front of the soldiers face is unprotected. But he can see without restrictions, breath freely and hear the commands of his leading officer.

"I am a Paladin!"
>OMG, Malthus, there are no damn paladins in Battle Brothers...<
"OK, OK! Then I´m a wrecked down minstrel drunkard pretending to be a paladin, singing so wrong in the midst of battle that even the undead run in fear... Better?!"