have you also done these placeholder “assets” (is that the correct term? ^^) or where are those from and what purpose did they originally serve?

Thanks for asking, it’s fun to explain how I work every once in a while. I first paint a very rough setup and then put in placeholders for the characters poses. Some of these placeholders are painted by me, others are just cut out of other images. You can clearly see a chaos space marine on the left side of the picture. His pose was pretty interesting, although I decided to do something else in the end.
If you dont have a lot of time, this is a fast way to see if your composition really works and if the picture has the right “spirit” so you dont waste time on something which doesnt come together in the end.

Have you ever thought about recording (and maybe explaining/commenting a little) the painting process of one art piece?

Of course and I already did so, allthough its not for Battle Brothers. Its just a time lapse video for an artwork I did for Shards of War.
Painting Timelapse
The problem with these videos is, that it takes extra time in preparation and editing. As you all know we are under constant pressure to get shit done quickly. On top of that its difficult to record such a video when painting a big artwork where the first half of the process is only testing, finding the right composition and poses.
Nevertheless I’ll try to record something, I think its awesome if I can show some more insights in the painting processes.

since eyes (of enemies) can already glow red, why not make the Fangshire’s wearer’s eyes glow yellow in the night, just like the text suggests(, as long as this isn’t already a thing ^^)?

If its a quick fix we might do it :) I’ll ask our programmer about it.

Hey Paul, it seems to me that something is wrong with this part of the picture…

I see what you mean. The whole dagger is there, but the part where it gets hit by the light looks a lot thicker than rest. I think I’ll leave it like that for now, even though its obviously an imperfection. 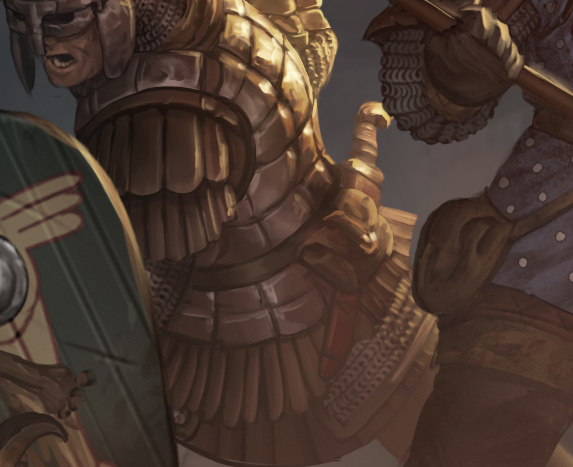