By the way, that video gave me an idea: What about an unique “boob plate” armor for our brothers to wear?

I’d be careful with this stuff. The whole “women” topic is already pretty explosive. Let’s not wake sleeping dogs haha.

Very well then. (Though I still think, it would be funny to have one for our male mercs. But then again, that joke could get lost, as soon as, if ever, female mercs are implemented.)

Then this one will have to do the trick: 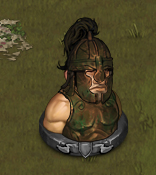 Edit:
https://www.reddit.com/r/AskHistorians/comments/4q9pmt/was_boob_armour_ever_a_real_thing/ (best comment)
What about “dresses combined with visable armour covering arms and head”? It would have less/no potential to offend anyone, but would maintain the joke. ^^