The ‘Beasts & Exploration’ DLC is set to release on the 29th of this month and by now it’s essentially feature-complete. We’ve moved on to thoroughly test, balance and polish everything, but there’s still so many interesting smaller things we haven’t even talked about yet. Let’s shine a light on some more of these this week!

A mercenary’s life isn’t easy, and seeing the man to the left split in two by an orc and the man to the right mauled by an unhold does put a strain on the psyche. People react differently to this, and so we’re introducing several new traits that characters can gain and lose over the course of a campaign depending on how their time with the company goes, what their background is and what other traits they have. 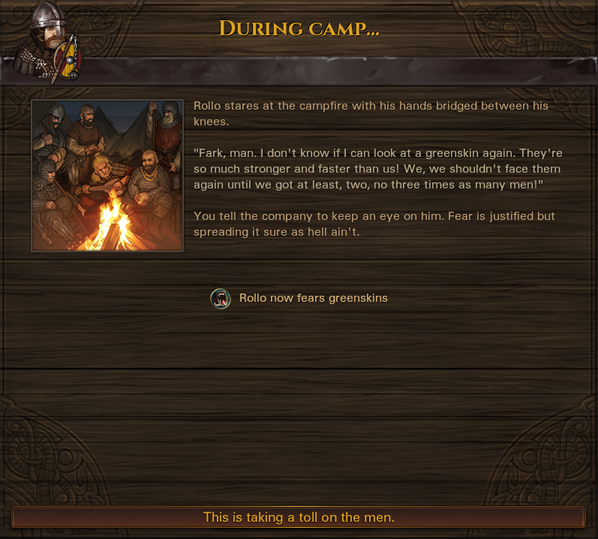 For example, a devastating loss against orcs may result in a character starting to fear greenskins and having less resolve when in battle against them. A sentiment that most people who played Battle Brothers can sympathize with. But as he grows in experience and is hardened by battle, he will eventually overcome his fear and lose the trait again. At the same time, another character may handle the loss quite differently, become more determined and start to hate greenskins instead, gaining a bonus to resolve when fighting against them. All in all, the number of new character traits has now climbed to be 16 – good, bad, and combinations of the two. Most of them have event interactions, some unlock additional options in events, and many of them can be gained or lost by events.

Speaking of events, we’re currently at 52 new ones for the game. There’s still time left until release, so it’ll likely end up to be even more in the end. Alongside these events we’re also adding a lot of new illustrations and updating a couple of older ones with more high quality artwork.

As you may have guessed, that illustration on the left is related to one of the upcoming legendary locations.

As part of the free update accompanying the upcoming ‘Beasts & Exploration’ DLC, we’re doing a balance pass on all of the character perks. The objective isn’t to make the game any easier or harder, but to further improve build variety, especially in the late game. You’ll find a list of all perk changes in the changelog once the update is live, but there’s two perks, one old and one new, which we want to talk about in more detail.

The ‘Hold Out’ perk stands out as the least-picked perk in the game currently; it benefits you only in a specific situation you want to avoid as much as possible, while at the same time you can pick other perks instead that actually help you to avoid getting into that situation in the first place. We’re going to entirely replace the ‘Hold Out’ perk with a new perk called ‘Resilient’. If you’re one of the few people that liked to pick the old ‘Hold Out’ perk, fret not, for you can now get the same effect without having to spend a perk point for it by drinking an ‘Iron Will Potion’ which can be crafted at the taxidermist from relatively common ingredients.

The new ‘Resilient’ perk reduces the duration of any negative status effect with a finite duration by one turn, up to a minimum of one turn. For example, the ‘Bleeding’ or ‘Poisoned’ status effects both have a duration of two turns, which get reduced to one turn. Of course, with a shorter duration, those two effects will also inflict less damage to a character. And quite importantly, some new status effects, like being ‘Charmed’ by a Hexe, also get their duration reduced by one turn. It’s not necessary to have the perk in order to beat the Hexe at all, but it is one possible counter and can be quite helpful if you otherwise struggle against opponents which rely on negative status effects to make your life hell.

And speaking of making your life hell, enemy bases are more proactive now in sending out parties to intercept anyone that threatens them and that they can realistically take on. Camping right next to a bandit hideout to wait for morning may not be the best idea anymore, and even locations infested by undead may send out parties come night. On the bright side, if a base sends out a party to intercept enemies, their garrison will be weakened, and in some cases only a skeleton crew will remain. You can use it to your advantage by splitting a large enemy force in two, or even attack while a third party is luring part of a garrison away! 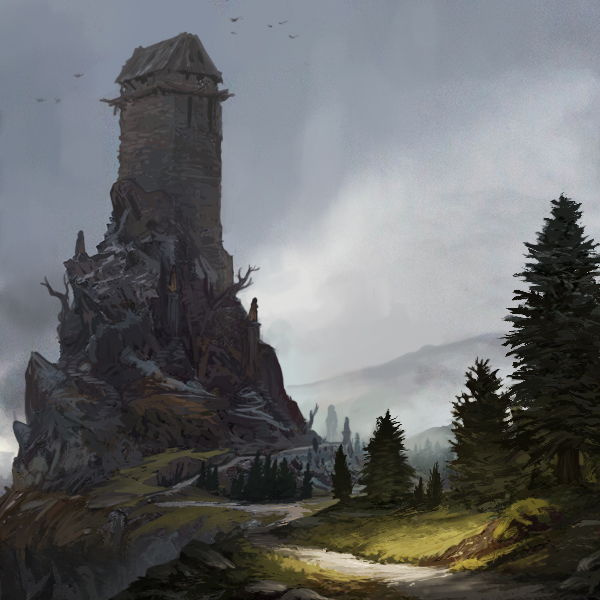 Join us again next week for some moving pictures. Our very own Jaysen will start a new Let’s Play series with the ‘Beasts & Exploration’ DLC and explain all of the new features and content as he encounters them.