We’re beginning to wrap things up this week by finishing the last remaining items on our roadmap of things to make it into the final major update. The obituary is done, the veterans’ hall is now fully working, and we’ve added a whole bunch of smaller features. If all goes according to plan, you can expect the update to hit the beta branch of the game later in February. Let’s take a look at shiny new things!

Formerly known as the Veterans’ Hall, the Training Hall is now working fully in the game. Usually to be found at larger cities and castles, you can pay to have your men trained in various ways here to shape them into hardened mercenaries – especially useful for mercenary companies later in the game that take on new blood. 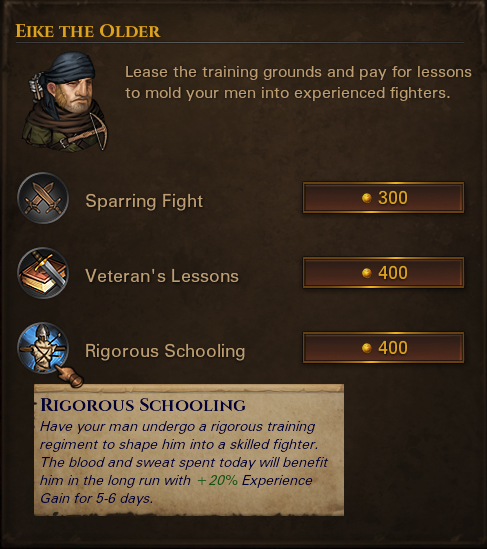 Also known as the memorial wall or graveyard, the obituary is a new screen that lists all of the men that have fallen under your command so you can properly honor their sacrifice. Aside from being reminded of their achievements and time with you, you’ll also get an unnecessarily colorful description of how they died in a column of its own.

Old dogs can in fact learn new tricks, as your men are now able to attain levels beyond the 11th character level. Any such level is considered a ‘veteran level’ and, for balance reasons, comes without a perk point and with limited attribute gain, but it does allow anyone living long enough to truly reach their potential, for you to continue to experience the leveling progression also in the very very late game.

Another new feature is the ability to attack anyone on the worldmap, no matter your relations, when turning your friendly glove mouse cursor into a threatening sword cursor by holding the Ctrl key and left-clicking them. This only works when you’re striking out on your own and are not currently employed, but it does allow you to go the route of banditry and make lots of enemies if you truly want to, without having to first annoy your employers enough to finally declare you hostile. Although there won’t be any new gameplay aspects to support banditry for now, there’s a new deterrent coming: competing mercenary companies that can also get hired by your enemies to hunt you down. 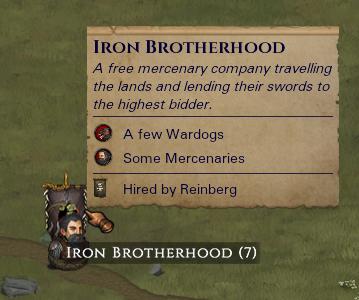 The coming update will add around a dozen new contracts to the game, and several dozen new events. We’re still busy writing more of them – more interaction with your mercenaries, new encounters as one of the late game crises ravage the land, and some hidden stuff to discover. We’re also creating new illustrations to go with these. Have a look!