These ones in particular seem odd.

Why a muslim crescent in Europe? The European crescent would look like this: 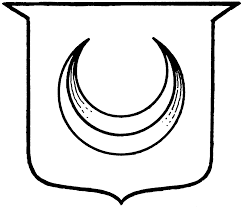 Also, the lines are patterns and I think it a bit strange to have the charge over the pattern. If the banner was partitioned, and one partition would have the pattern the other the charge, it would make more sense. The colour combination blue, black, white is otherwise my favourite so I actually use this shield just for it, but heraldically it makes no sense.

A crown was a simbol of royalty (usually yellow on coats of arms). Would a king not chop of a mercenary leader’s head if he dared to present himself with a “royal” symbol? And this one also is the charge over the pattern…

The last two are just odd colour combinations, although from a personal perspective I like the idea of both. But the sword one again, charge over pattern, which is unusual, so would be better to split the shield in half, with one half having the stripes, the other half the sword, while the last one the green stripe rather breaks it. A plain golden purse on a red or black background would be better.

It’s important to note that the kind of codified heraldry being talked about here only started to take shape near the tail end of the period that you are dealing with – that is 1100 and upwards, so not early medieval. Some of the ideas that were to result in heraldry taking shape were most likely already around before that, considering the history of war banners, but the rules mentioned above didn’t exist yet.
I also agree with how a newly formed mercenary group would not necessarily care about heraldic rules, even if they knew them. They could also be using a banner with local importance or a traditional symbol of strength. Adding some wouldn’t hurt though for the purpose of playing someone who does care and there are some really nice heraldic banners to be found. However, it’s not an absolute necessity in order to make your mercenaries come across as believable.

This game has the warhammer (bec de corbin) and the billhook, the kite shield and some high medieval helmets, so it’s not early only. Therefore it must span 900-1200, possibly 1300 even. By 1100 the heraldry was pretty codified according to the basic rules, although the device itself, the charge,t he symbol, was left to the discretion of the noble to chose. Check Norman coats of arms from William the Conqueror’s times… I am not against using outrageous devices, severed orc heads, skeleton necromancer birds, werewolf claws, whatever, but the positioning and colour combinations should have some basic heraldic sense is all.