We have a bunch of new things to show you this week. As work continues on the strategic part of the game, we give you a preview on the perk system for Battle Brothers. We also have a new weapon, the Flail, and decided that the character and equipment screen should have a layout redesign based on player feedback. But first, the trailer.

Having people grasp at a glance what Battle Brothers is about can be hard when all we have in terms of video are several 20+ minute long commented gameplay clips. Clearly we need a short and snappy trailer to showcase the game to a larger audience and get the idea across in just a minute or so – especially now that the game is getting some more media attention. It’s been overdue for a while, really, but we wanted to complete the combat demo first in order to let you experience the game yourselves instead of merely putting bold claims out there.

The trailer we’re working on will consist of a mixture of both gameplay footage and partially animated drawings to build up atmosphere. To give you a first impression, here is the non-animated version of one of the scenes that will be shown in the trailer. If you’re interested, you can follow the progress more closely in Paul’s art thread on our forums. 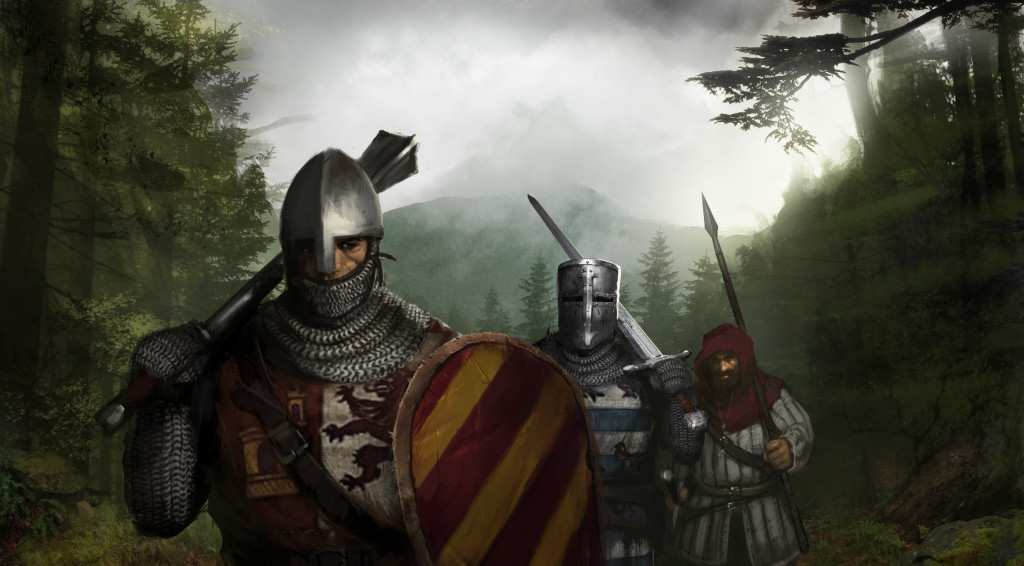 A key component of the strategic gameplay will be the character development of Battle Brothers by gaining experience and leveling them up, rpg style. With each levelup, a Battle Brother will have the opportunity to select an additional “perk”, a passive skill that confers some advantage and allows for specializing in some way. These perks can have a variety of effects and we’re still working out the design of all the final perks. When designing them, we have several concepts in mind.

First, we don’t want a perk to simply increase a basic character stat like hitpoints or stamina that can otherwise already be increased on levelup. That’s just boring. Instead, we want them to offer a unique effect that isn’t otherwise accessible.

Second, we want them to have a meaningful impact on the game. Perks should change the way you play with any particular Battle Brother, and the way to achieve this is by having perks be strong enough to open up new tactical avenues instead of merely relying on single digit percentage modifiers. There should be a feeling of accomplishment when gaining a level and anticipation when selecting a new perk. Players should then rush to the next battle to try out the newly aqcuired perks in action. It would be terribly frustrating to reach the next level and then get the feeling that the perk does absolutely nothing for you.

Third, all perks have to be viable choices. Not for every individual Battle Brother, of course, since we want to encourage some specialization, but in general. There must be no instant-picks and no-brainers. This might be the hardest to achieve and will take a lot of balancing, tweaking and time; many a game fails at this this with skills out of balance so much that players would have to be willing to put themselves intentionally at a disadvantage by not picking some of them up every time. Still, we really want people to choose perks according to their individual playstyle and tactics and not because they read in some internet forum which perk is the indisputably strongest.

Perks will likely be organized into several thematic trees (e.g. mobility, offense) and individual perks may require certain other perks to be picked first. How exactly the perks will be organized is yet to be determined, though. To give you an idea of what a perk might look like, here are a few examples that may or may not end up in the game like this:

“Berserk” – Recover 4 AP when killing an enemy. Can only occur once per turn.

“Pathfinder” – Reduces movement AP costs on all tiles by 1 down to a minimum of 2.

“Coup de Grace” – Inflict additional damage against targets that have been stunned.

One of the more frequent points of feedback from the combat demo was the character screen layout, and how players needed to constantly switch tabs between seeing all Battle Brothers and the Stash when equipping their party, never able to see both at the same time. We agree that this is less than ideal, and we’re about to change it.

We took the layout of the character screen back to the drawing board and tried to come up with a solution. The minimum resolution we want to support is 1024×768 – and that really doesn’t leave a lot of space. On the other hand, doing more than one layout (and later on, skinning it) for multiple resolutions isn’t a great use of our time, either. Our solution is the mockup below; it may look a bit congested at first, but it does allow for showing the list of Battle Brothers and all the other tabs at the same time. Even better, it can now scale to the right with increased screen resolution, making use of additional screen space without us having to do an extra layout. Do mind that this is still work in progress, though, and may yet change further. 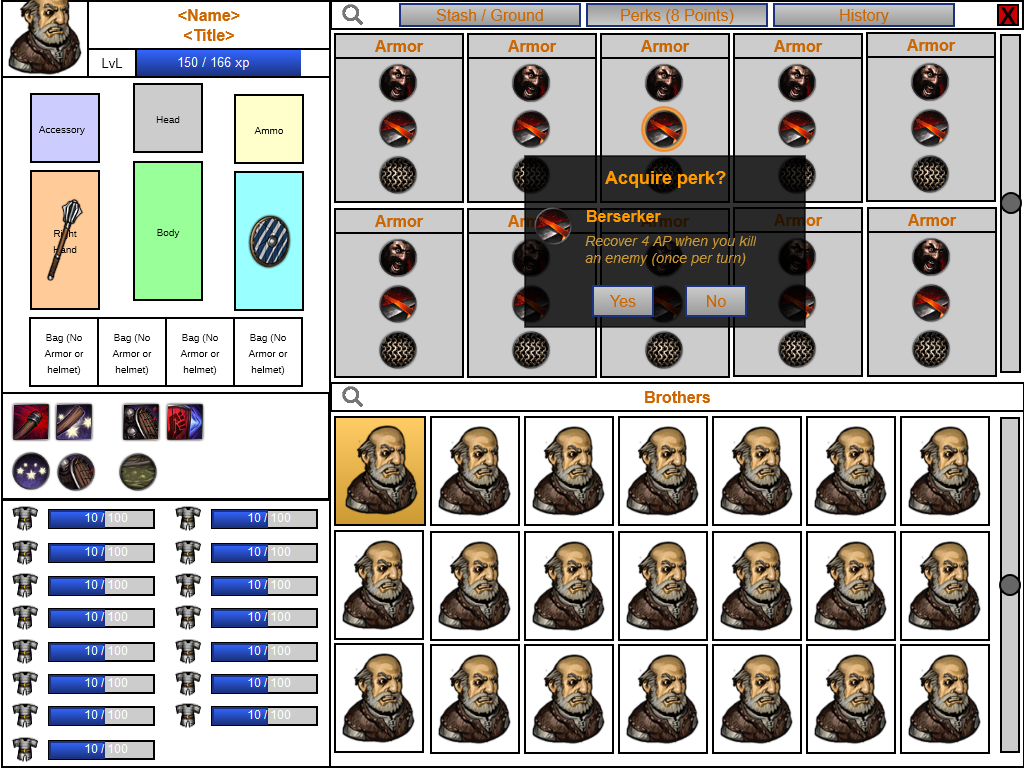 Another week, another new weapon added to the game. This time it is the Flail, a separate striking head attached to a handle by a chain. In the game, the Flail’s damage varies greatly with each strike, making it perhaps the least predictable weapon currently. It has a reasonable effectiveness against armor and, like all weapons, comes with a unique tactical quirk. 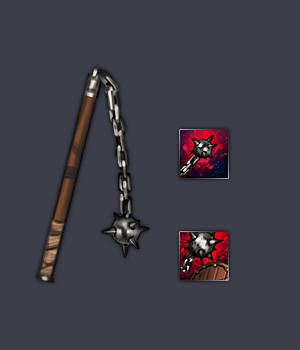 The Flail’s chain and striking head can easily bend above and around shields, rendering their normal defensive bonus ineffective. Using the second skill of the Flail, even a Shieldwall offers little protection against it, making it a great weapon against heavily shielded opponents in tight formations. The flipside is, of course, that the Flail comes with no defensive skills and is outperformed by some other weapons when against an opponent without a shield.

Be a Bro and support us on IndieDB!

Lastly a quick shoutout to all our readers: Download the Battle Brothers Demo and show your support by rating us on IndieDB!