This is an imaginary After Action Report (AAR) of a couple of ingame days in the full version of Battle Brothers. It describes in a prosaic way the events that will and can actually happen in the full game. We want the players to live through their own stories and not experience something we made up – a whole world that is different for everyone and each story is unique to your particular playthrough and playstyle.

So enjoy the read and let us know what you think!

Is that a light in the distance? Magnus rubbed the rain out of his eyes and tried to identify the source of the yellow light he thought he saw a couple of seconds ago but it had already disappeared behind the slow moving rain curtains that have had been falling all day. Right next to him, his companions Torstein and Bjarn staggered along the muddy road followed by Carl and the oxwagon that held all their equipment and what was left of their supplies. The lack of fresh food, shelter and a decent night’s sleep took a huge toll on the men’s morale. No one had talked in hours except for the occasional cursing about the weather, their situation and the indifference of the gods in general.

After what seemed an endless time trudging along the road, Magnus smelled fire. When raising his head he had to blink twice before realising that they finally arrived at Wiesendorf, the small settlement they planned on reaching 2 days ago.

Everything was going its way until Bjarn, who was scouting ahead at the time, told them about a strange set of ruins that looked like a burial site he discovered in the hills nearby. To reach the ruins they had to delay their trip and lose another two days, but they hadn’t made a silver piece in a while and the dwellers of the hills were known for burrying their dead with all sorts of riches for the afterlife. In the end, greed won over reason and from that point everything went downhill. There were seven of them when they made that decision.

A world ripe with opportunity

With most of the soldiers and young men being sent away to conquer a land Magnus never even heard of, the time was high for men who where ready to take fate into their own hands. Most settlements still maintained small militia forces, but the land beyond the town gates often had no protection, noone to keep the order of things. Hunger after a bad harvest can turn a good man into a thief, and a thief into a murderer, and there were few good harvests to be had these days with so many men sent beyond the great sea. Thiefs, cutthroats, highwaymen and worse set up camp all over the countryside. But there was also a decent coin to be made with safeguarding villages, caravans and merchants that travelled the land. This was the new order of things. At heart, Magnus always felt the urge to protect the innocent and helpless. A knightly notion, and a naive one some would say, but this was him. If a filled coin purse comes with a clear conscience he would be the last to say no.

Magnus assembled a diverse band of sellswords over the past months. Most of them not trained soldiers, but all of them decent men who knew which end of the sword goes where. All of them wanting to take fate into their own hands. Although they never officially made Magnus their leader, they all seemed to listen to his suggestions and so far they fared well this way.

The weeks leading up to those dreadful events at the ancient burial site had been a dry spot regarding silver pieces. The band encountered neither caravans in need of protection nor anyone else that would hire them. Not even pillagers or bandits to hunt on their own and exact a toll on. When Bjarn came back with the news about the ruins, the men’s eyes started to shine with the prospect of riches guarded only by piles of dust and the shattered bones of men that ended their watch long ago. Only Carl, an older and well-traveled scribe, tried to warn them about things much worse than outlaws. Things that were said to only come out at night, to rise from the graves with a hunger for the flesh and warm blood of the living, things from beyond this world. Laughing at the old man’s tales, the men broke camp and made their way towards the hills.

When they arrived at the ruins at dusk they set up a small camp nearby with Carl staying back and guarding their supplies. Bjarn, having his short bow at the ready, moved some paced ahead of them and scouted the area for any immediate threats like resident hill dwellers, or others also looking to loot the ruins. He had the best eyesight of them all and during his years as a hunter learned to move quietly through the brushes without being detected. The other six approached the burial site carefully in a spread out line.

At the center of the line was Magnus, armed with a short sword and a small wooden shield. He put on the worn metal helmet he found in a bandit’s camp some time ago. Little did he know that it would save his life later that night. To his left and right walked Torstein and Hjalmar, the youngest of their band, both not having seen even their 20th summer. They held their hatchets so tightly that their knuckles turned white and nervously looked at the sun that slowly faded away behind a mountain ridge in the distance, immersing the whole scenery in an orange tint. 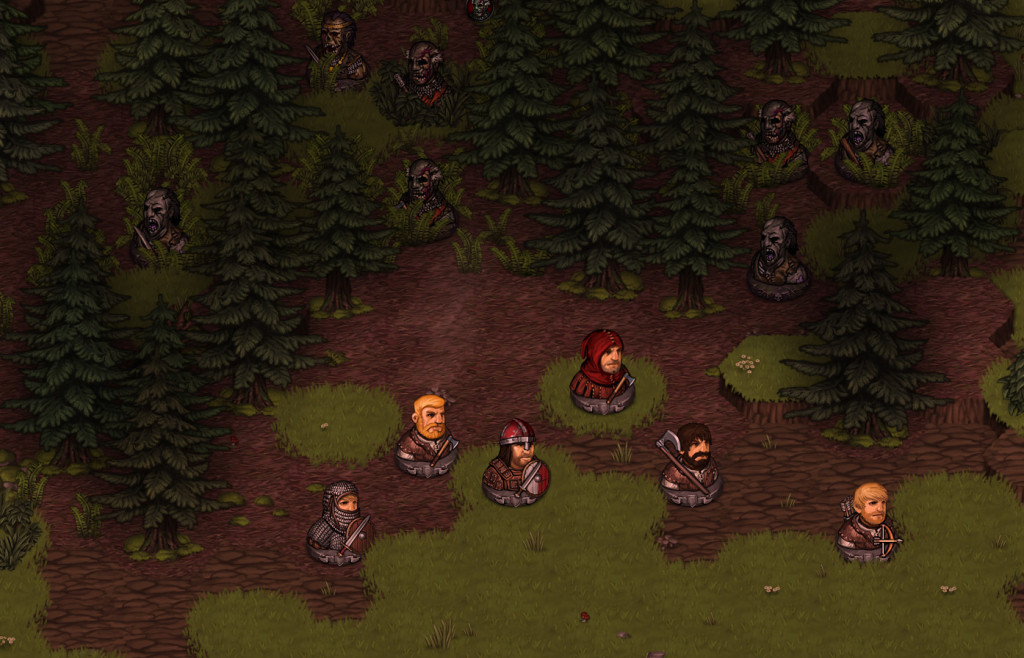 To the far right Erik strided along, resting his massive two-handed axe on his mighty shoulder. As a woodcutter he knew how to use that axe. When it came down to it, there was little difference between a tree trunk and a man – or at least so Erik never got tired of claiming. The left end of the line was held by Heinrich. Although the years finally caught up with him, he was the only real soldier in this little company. The years had seen him do little else than fighting for coin, whether paid by noble lords or scraped together by villagers that feared for what little they had, and so joining up with Magnus and the others had come naturally. He needed the coin and this was the way he had always earned it. His face showed no emotion as he slowly walked towards the ruins in a rustling chainmail, the only one with armor that wasn’t made out of some poor deer’s hide.

Suddenly something moved in the woods to their left, less than a stone throw away. They immediately stopped and turned towards the dark woods where it seemed that a man was standing between the trees just looking at them. Bjarn shouted at the man to come out and show himself but there was no reaction except a moaning sound. They all looked at Magnus waiting for him to tell them what to do next when a tree to the right of the strange man started moving, and then another one.

The fading light tricked their eyes, it was not the tree moving but more human figures that had been standing completely still. As the figures shuffled forward and out of the woods into the last bit of light, Magnus saw their horribly disfigured faces that were covered in rotten flesh. Bjarn was the first to react while the others stood there in shock and disbelief. He pulled the string of his bow as far back as he could and let loose an arrow at the nearest of those things. The arrow hit it right in the chest but the creature just moaned and continued on towards Hjalmar who was closest to the woods. Only when the creature nearly reached him did Hjalmar come to his senses and stumbled backwards. Before any of the others could intervene, the undead managed to grab Hjalmar’s arm, pulling him close as he struggled, and buried its rotten teeth deep in his neck. His scream broke the numbness of the others and they charged at the walking dead that kept stumbling out of the woods. 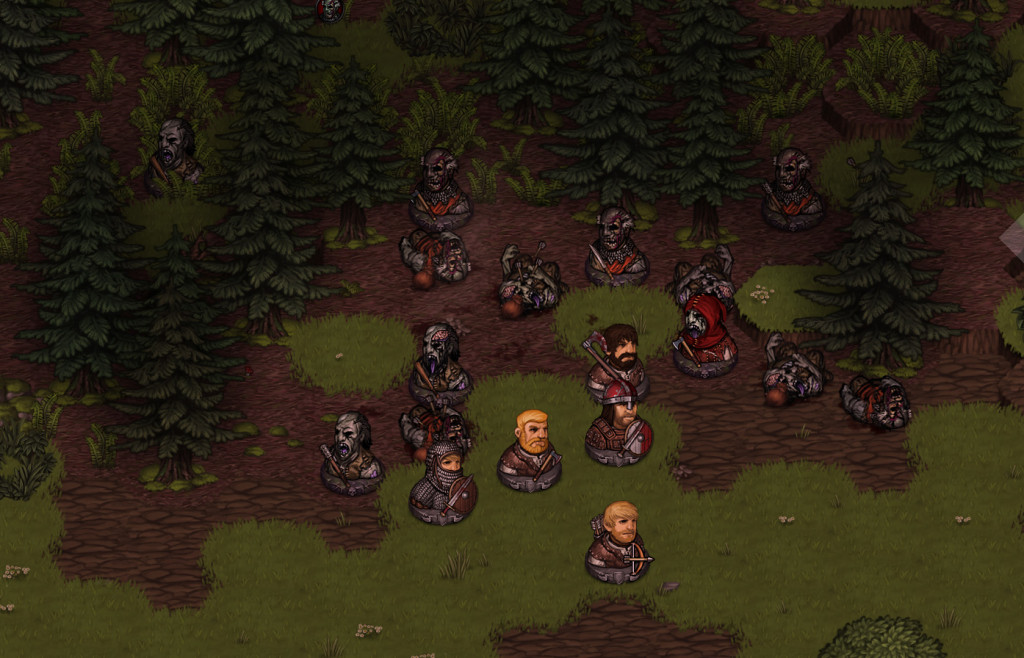 They made quick work of the first line of undead that made it out of the woods and then rallied around Magnus to catch their breath. Hjalmar lay still on the ground with his face slowly turning white. There was nothing they could do for him, he was dead. The break was way too short, more undead came stumbling from the depths of the woods and headed right at them. They quickly aligned in a battle line and braced themselves for the incoming attack. As the face of the first zombie made contact with Heinrichs shield buckle they heard a loud scream from Erik’s end of the line. Erik struggled to get rid of one of the monsters that was clinging to his leg and biting him repeatedly. With one jump Magnus was at his side and smashed the thing’s head with a blow of his sword. Only then did he realize that it was not one of the zombies from the woods, but poor Hjalmar who had come back from the dead to attack Erik from behind. Magnus and Erik looked at each other and both knew that things looked grim for Erik. “Run” said the brawny man while tightening the grip on his axe “I will hold them back as long as I can! Run!”

“No way” replied Magnus and threw himself at the closing undead.

The next thing Magnus remembers is being shaken roughly by Bjarn whose face was covered in dried blood and mud. He slowly regained consciousness and tried to get his bearings. Blurry shapes around him turned into lifeless bodies, arrows, discarded weapons and smashed shields. Except for Bjarn he only saw Torstein who was leaning over something that was lying on the ground. Magnus tried to get up and groaned while scrambling to his feet. “We need to get out of here fast” said Bjarn. “Erik, Heinrich…?” asked Magnus, but Bjarn just shook his head. With Bjarn and Torstein supporting Magnus, who must have received a blow to the head, they stumbled away from the battlefield that was soon swarming with even more of the walking dead. 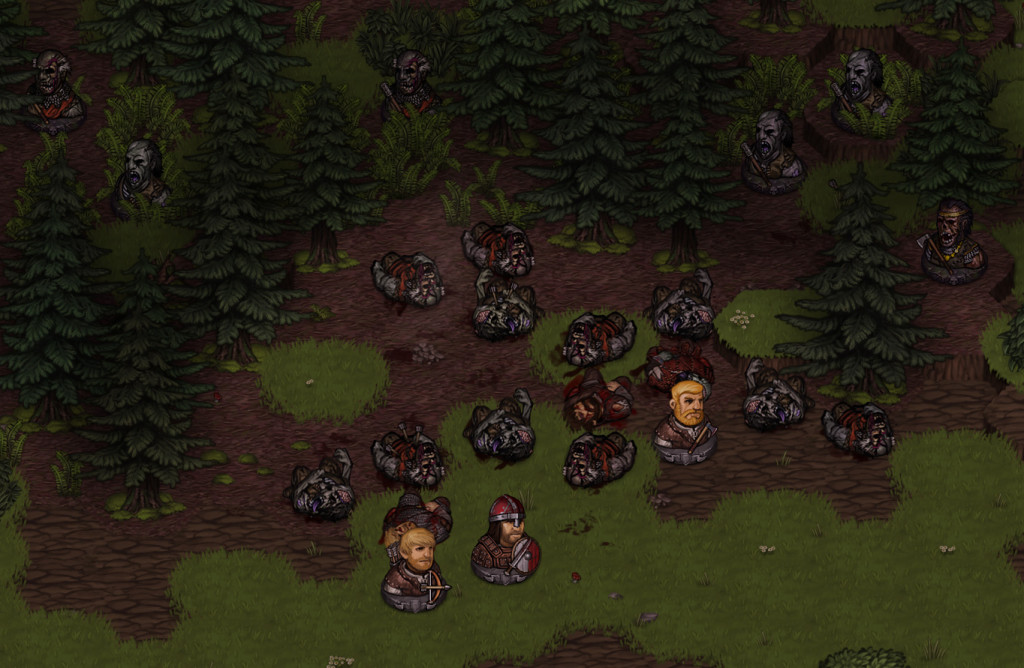 The battle by the old ruins was neither their first, nor their last, but it was the first they fought together. They started out as strangers, united only by the prospect of easy riches. The things they saw, the things they did and the things they went through together turned them into brothers. Battle Brothers.