Time for another progress update on everything Battle Brothers – UI, inventory, sound effects and more!

We’ve reworked parts of our tactical battle UI to show you more helpful information in your upcoming engagements. The combat event log can be expanded now to show all previous entries, and we show a count of the number of Battle Brothers and opponents left on the field to keep you updated on how the battle as a whole is going. If the player hovers over a target to attack, we now detail all things, positive and negative, that factor into the hitchance – so there’s no guessing anymore, and you’ll know why you miss those shots and what you can do to improve your hit chances. 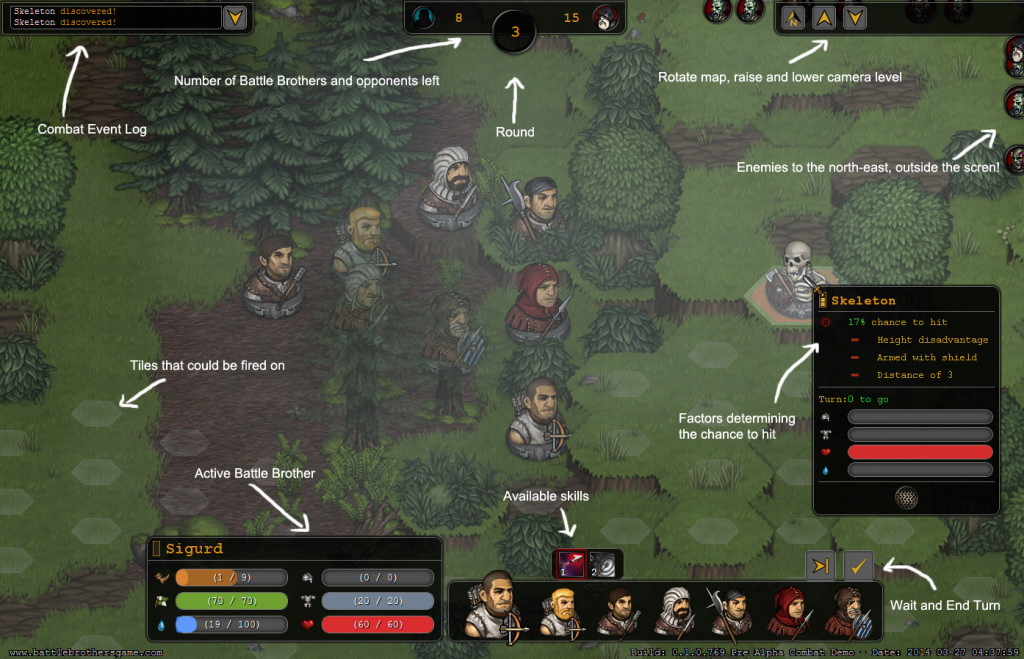 We experienced first-hand in one of our early closed tests that players don’t read manuals anymore. That’s why we chose to have every function also as a clearly visible button embedded into the UI – rotating the map and raising and lowering the camera level, for example. Once players are familiar with the game, we’re pretty sure they’ll use hotkeys to quickly access those functions – but until then, buttons should make everyone aware that these functions exist in the first place, and tooltips will explain their use and what key they’re bound to.

The inventory and character screen is going to be a central hub for equipping and developing your Battle Brothers. The equipping part will also be featured in our upcoming combat demo, and that’s what we’re working on still. Beyond the demo, every time one of your Battle Brothers levels up, you’ll be able to pick a passive skill (also known as a perk or feat, if you prefer) out of several skill trees here in order to shape them the way you want.

Our basic design of the inventory screen looks like this – though, as you can see, it shows placeholder data currently and we now have to fill it with real one from the game. 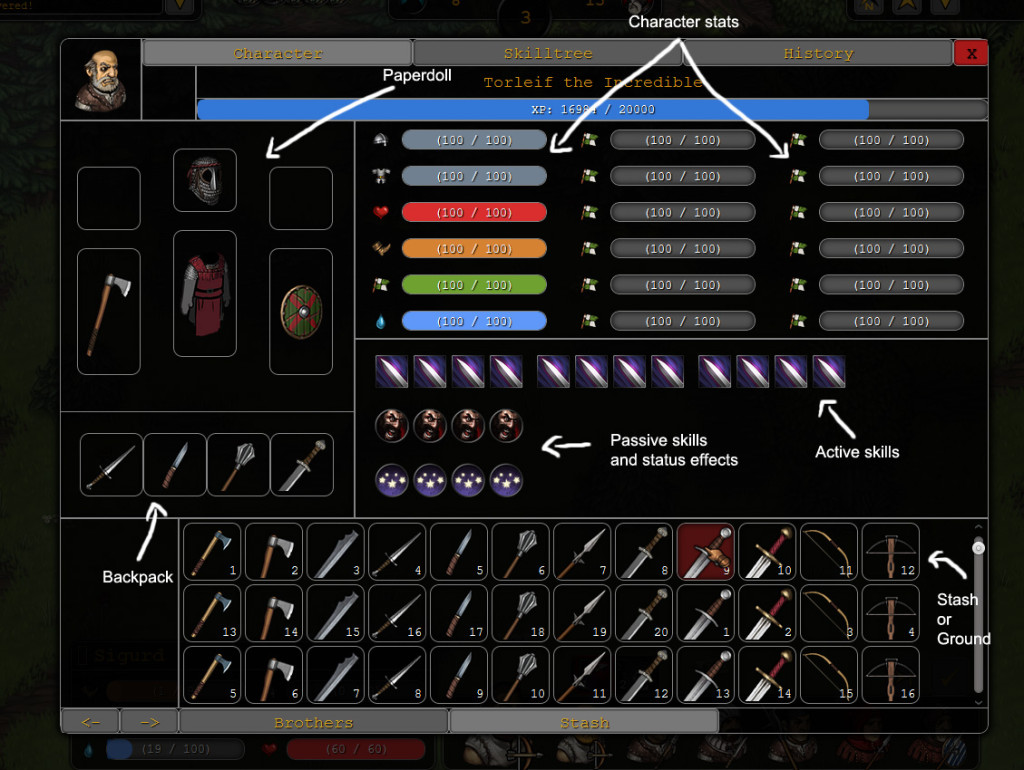 On the left you can see our paperdoll-to-be. We have slots for body armor, helmet, main-hand, off-hand, ammo and accessory. Below, there are also 4 backpack slots for additional gear you want your Battle Brothers to carry around, like a spare shield.

Paul [take a look at his art thread], our artist, is working on finishing up the weapon and armor icons for the inventory system. Each individual item in the inventory will be depicted the same way also on the battlefield, and we have loads of varied color patterns for all helmets and shields available so that you can run wild customizing your men and giving a unique look to your personal gang of Battle Brothers. The screenshot below should give you an impression on how the armor icons evolve from sketches in the top row to the final quality we’ll have in the game at the bottom row. 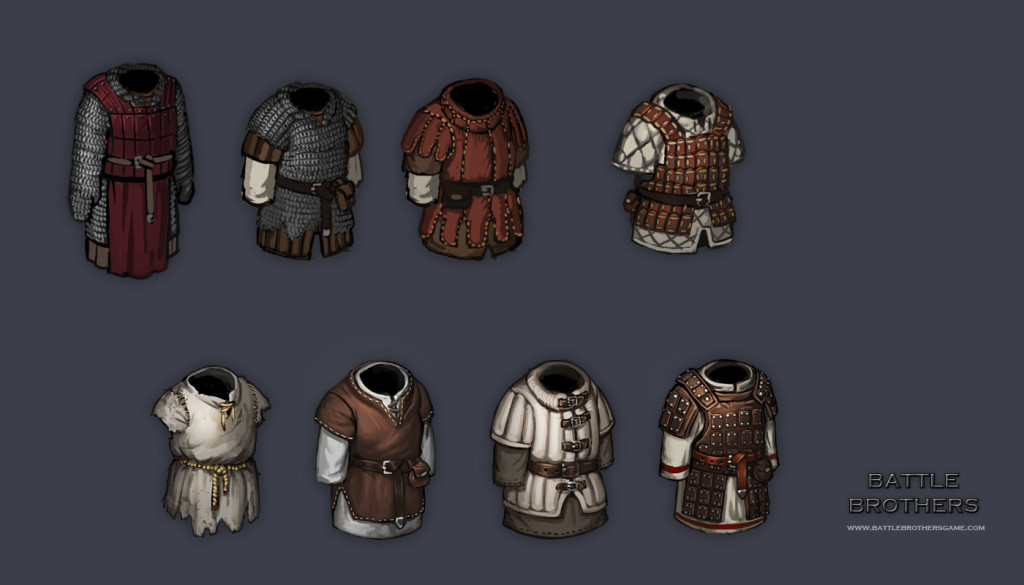 Medieval battles are brutal affairs, and we want our game to reflect this visually. We want our battlefields to be littered with discarded shields and arrows, and our combatants to really look the part if they’ve just barely survived a deadly encounter. As you guys know, we already show damaged armor and injuries on the characters. Since last week, we also display blood on weapons that have spilled blood. When characters have spilled lots of it, they’ll now even be sprayed with it themselves. It’s not over the top and looks reasonably subdued unless the character wears white – but skeletons especially look extra fierce now after they’ve slaughtered a few men. 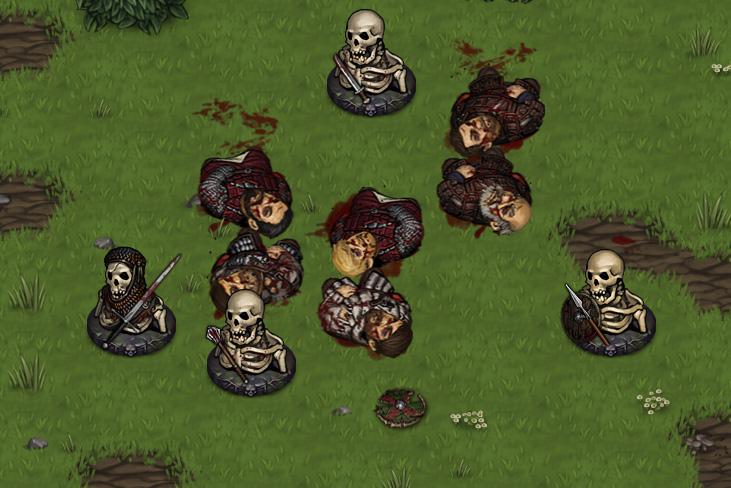 We hope that these effects will do their part for the feeling of achievement after a won battle when you look at your battle-worn and blood-covered men that prevailed against all odds!

Having a rich scoundscape is really important to us, especially since we can’t convey visually all the intensity of a pseudo-medieval battle we’d like to without fully animated combatants. Previously we only had placeholder sounds in the game, so it is a big step forward for us to now have our very own sound effects for most weapons and skills in the game!

We’ll continue to add new sound effects and replace placeholder ones along the road, so you can expect steady improvements as we go. Of course, the upcoming combat demo should now also sound quite a bit more engaging!