As you’ve learned in our dev blog about crafting, you’ll soon be able to create potions. How do these fit into the game and the gameworld, and how do they work? And what about the ability to paint shields and helmets while we’re at it? All this and more in this week’s edition of our devblog for the upcoming ‘Beasts & Exploration’ DLC. Let’s go!

There’s two types of consumables you’ll be able to use.

The first one you’re already familiar with – take, for example, Antidote or Goblin Poison into combat, use them in combat, benefit from them in combat. Apart from adding lots of new consumables, there’s one thing we’re changing about these in general: They no longer go into the accessory slot, but instead can be used from any of the bag slots. This way, it’s a lot more convenient to carry and use things like bandages without having to switch things around in the inventory, and using accessories like wardogs no longer prevents you from also using bandages at the same time.

The second and new type of consumables are those used exclusively on the worldmap. They can’t be equipped by your characters, but while on the worldmap, you can drag them onto the currently selected character to use them on this particular character. These include armor attachments, potions and paint items. You can identify these types of consumables by the ‘+’ on their inventory icon, and there’s also a new filter category so that they don’t get lost betweenst your other possessions. Let’s take a more detailed look on potions and paint items, then.

Battle Brothers has always been low fantasy, and we’ve deliberately established this asymmetry of a mercenary company composed of ordinary men, led by the player, who sometimes have to fight even supernatural enemies with their earthly means. That’s a pillar of the game’s setting, and it’s not going to change. That said, we still believe that in a quasi-medieval world there’s a place for alchemy and potions while keeping things grounded for the player.

Take the ‘Potion of Knowledge’. It’s a fancy name and what it promises borders on the mystical. Take a look at the accompanying status effect, and you’ll see that things aren’t always what they seem. It’s a matter of perspective, and it’s how we’re handling potions in Battle Brothers. They’re essentially drugs.

So, with that established, here’s the deal: You’ll be able to craft both potions for use in combat, as well as potions for use on the worldmap. Potions for use in combat give benefits such as a temporary bonus to a specific attribute, let the user ignore freshly suffered injuries or see at night. Potions for use on the worldmap include faster experience gain, as you’ve seen, wound treatment, and one particular effect that many people have been asking for for a long time. Of course, the more powerful the potion, the more rare the ingredients. And because all of those are essentially drugs, there’s always the chance of overindulgence and addiction. 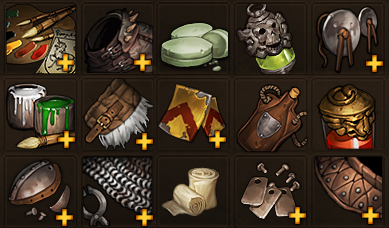 Another type of consumable which can’t be crafted, but can be bought and looted, are items with which to paint your shields and helmets in the colors of your company. Helpful also, perhaps, to establish specific color schemes for specific roles in your company. 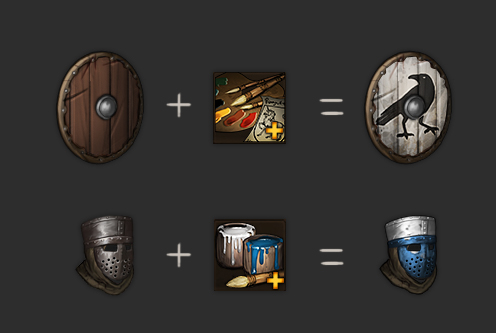