And now for something completely different. Formerly announced as company feats, the ‘Blazing Deserts’ DLC will introduce a new gameplay mechanic to Battle Brothers, called the Retinue. Read all about it!

A big reason why suffering heavy losses late in a campaign is devastating, and also why coming back from those losses is difficult, is because most progress that you attain throughout a campaign is in the growing strength of your men – which is the very thing that you stand to lose in every battle. While you can and should save some crowns for hard times, all too often you’ll have to start near the bottom again and hire fresh recruits all over. But what if you’d have a drill sergeant that whips these recruits into shape more quickly? And what if having that drill sergeant would be an advantage that you couldn’t lose again? In other words, permanent progress not erased by battles lost.

Some of you will recall the concept of having ‘non-combat followers’ – non-fighting specialists like blacksmiths, surgeons or that drill sergeant mentioned above. A retinue of people that would support your company of fighting men outside of battle. It’s an idea that we’ve been toying with since before Battle Brothers even went into Early Access, and it’s what we’re now introducing to the game. 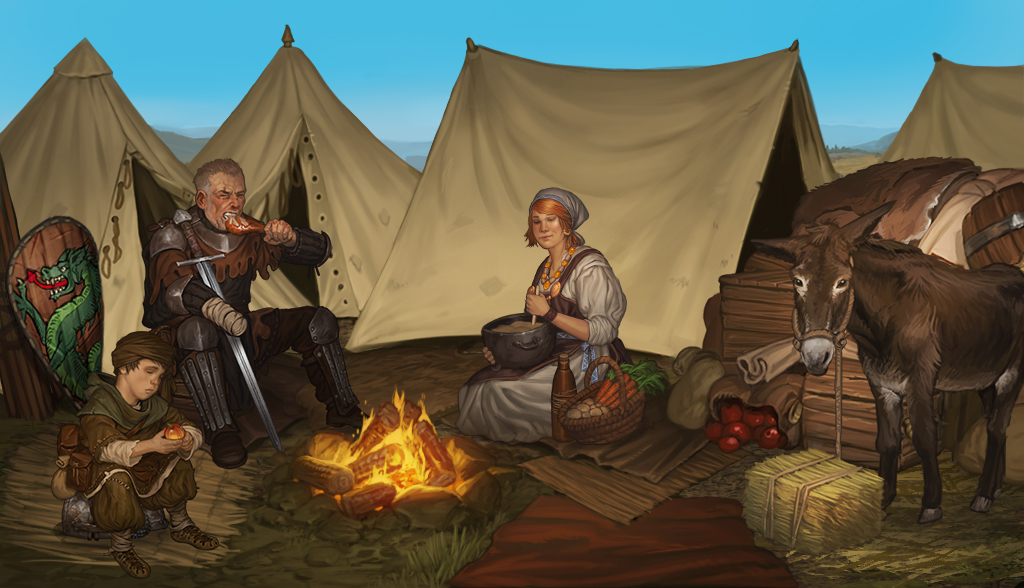 Your retinue of non-combat followers can be found in a new screen accessible from the world map. Here, you’ll find the men, women and children that travel along with your company sitting around a homely campfire. There’s five slots in total for you to fill, and several times that many followers available to choose from. Each follower pulls their weight by granting you one or more beneficial effects on the world map. Let’s take a closer look at the drill sergeant. 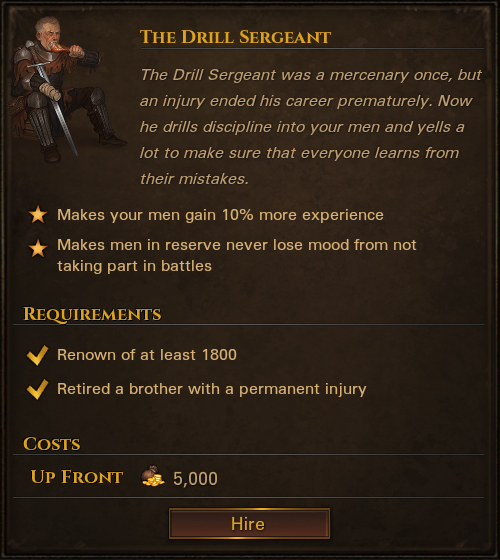 The drill sergeant makes your men gain more experience from combat and never lose mood when being stuck in reserve, by keeping discipline and enforcing a hard training regime. In order to hire a follower like him, you’ll first have to unlock them. At the most basic level, followers require you to have a certain level of renown, but many also require other conditions to be met. For example, in order to unlock the drill sergeant you’ll first have to retire a brother with a permanent injury. That’s not hard to achieve, but other requirements can be more involved, giving new goals to pursue. Each follower costs a certain amount of money to hire, and you can replace a follower at any time with a different one for a cost.

There’ll be followers available that have an impact on various aspects of strategic gameplay that any mercenary company has to deal with, like the drill sergeant, but also a couple that further support more specialized playstyles. For example, if you’re particularly interested in banditry, exploration, trade or named item hunting, we’ve got you covered. Choosing the right set of followers for your company is another way to customize it to your playstyle and to make each company and playthrough feel more unique. 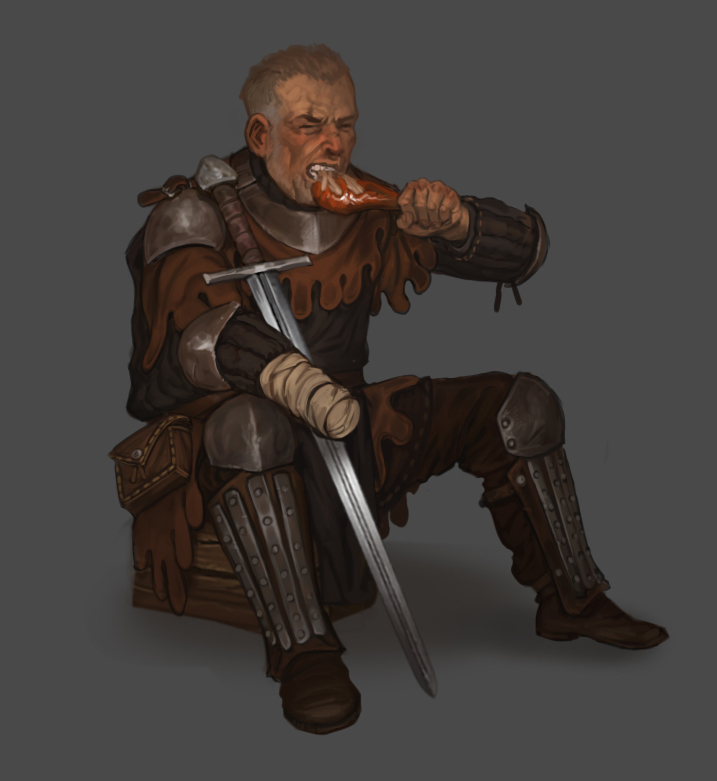 In addition to your entourage of followers, you’ll also find a donkey around the campfire which you can upgrade first to a cart, then to a wagon, and then to an even bigger wagon, each time to increase the capacity of your inventory. Indeed, you no longer have to wait until the right ambition comes along in order to unlock more slots for your stash, but you can at any time just buy more inventory slots for money here. Easy!

Join us again next week when we take a closer look at some of the followers available for your retinue in part two of this dev blog.