While Direwolves, Webknechts und Schrats dwell deep in dark forests of the north, the upcoming southern deserts have entirely different beastly inhabitants. We’ve already learned about the Ifrit, intended mostly as an opponent for well-established companies. This week is about a new beastly opponent for you to face in the early and mid game: The Hyena. Let’s take a look!

Prowling the southern deserts and steppe is the Hyena, a carnivorous mammal that resembles a poorly groomed cross between feline and canine. Prey can be few and far between in the endless sea of sand, and so the Hyena is both scavenger and nocturnal hunter. Many a traveler lost in the desert ended up a feast for a pack of Hyenas – but whether they tore him apart as he was still alive, or he died of thirst long before the pack came upon him, is another matter. 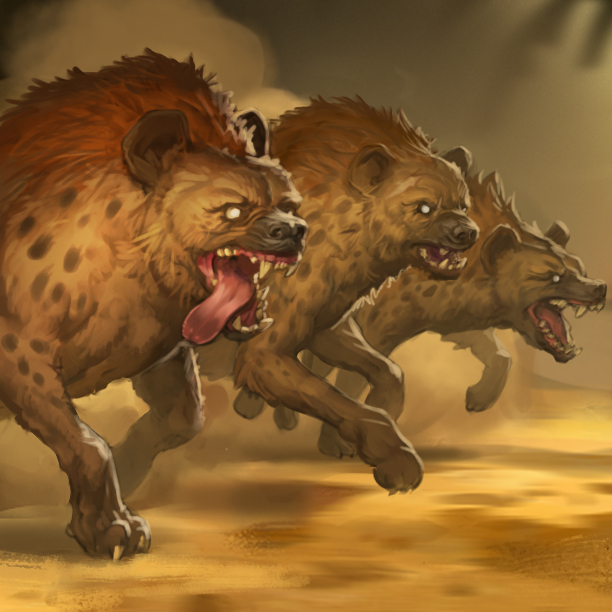 In the barren wastes of the south, no scrap of flesh can go to waste, and the Hyena has a jaw strong enough to crush bone so that it can get to every last shred. As it turns out, a jaw that can crush bone can crush armor quite well, too, making the Hyena a threat also to men in armor that would protect them against lesser wildlife. Although a Hyena is smaller than a northern Direwolf, and not always able to kill an unarmored man in a single turn, the way it rips flesh from its victims can leave terrible bleeding wounds and inflict the ‘Bleeding’ status effect. A battle against starved Hyenas is not lost as quickly as against a pack of Direwolves, but it may well be over before you even realize it when your men live on borrowed time as they slowly bleed out while the hyenas circle you in anticipation of a feast. 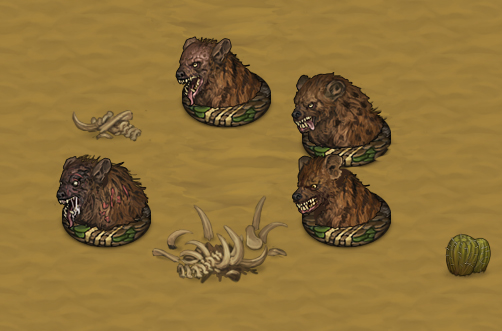 Hyenas roam and attack in packs that swarm and often surround their prey, attacking from multiple angles. They’re faster in combat than most other opponents, faster even than a Direwolf. A single Hyena can attack three times a turn, often overwhelming their victims and leaving them fatigued as they try to dodge every attack. However, their morale isn’t particularly good, and like most beasts they’re especially afraid of firearms spewing smoke and fire with a loud bang, unreliable as they otherwise may be. Naturally, Hyenas drop unique loot which can either be sold or used to craft new items, including a new armor attachment, if you own the ‘Beasts & Exploration’ DLC.