While we said before that our focus is now on the strategy part of the game, we’re constantly tempted to add little things to the tactical part as well. Seeing you play the demo and provide feedback gives us a lot of inspiration, and this is why this week we went back and added some new features and reworked others.

If you haven’t played our combat demo yet, get it here (DOWNLOAD) and tell us what you think and what you would like to see in the game! Do mind that the changes below are not part of the demo yet.

Reworked Damage System
We want our weapons to feel different not just with with unique skills, but also in how they perform against armored and unarmored opponents. Previously, a select number of weapons gave a small damage bonus when hitting armor. That made some weapons slightly better suited against armor, but it didn’t have that much of an impact damage-wise, since basically every weapon did a good chunk of damage to armor anyway. In fact, it didn’t seem to influence player strategy much at all.

We’ve now reworked that system so that different weapons perform significantly better or worse against armor in a way that has a definite impact on gameplay and equipment selection, while at the same time presenting this in a way that should be more clear and easy to understand. This is how it works:

Each weapon has a base damage range with a minimum and maximum damage value. If a target with no armor is hit, that damage is applied in full to the target’s hitpoints. 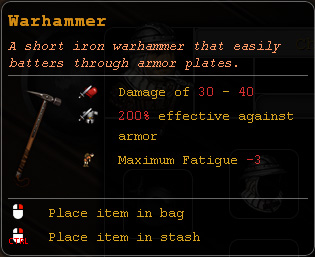 If, however, the target is protected by armor, a second property of every weapon comes into play, called the “effectiveness against armor”. This value is a percentage number that governs how much of the weapon’s damage is applied to damage any armor on a hit instead of hitpoints, for as long as there is armor left. For example, a dagger has an effectiveness against armor of 60%, so only 60% of its damage applies to damage and reduce a target’s armor. Clearly, then, a dagger performs better against unarmored targets. On the other hand, a warhammer has an effectiveness against armor of 200%, meaning that it does double its normal damage to any armor. Other weapons, like swords, might have a higher base damage and thereby be better at killing off unarmored and lightly armored opponents, but against heavily armored opponents, a warhammer is king.

Double Grip
If you’ve played the demo, you might have noticed that shields are seriously important. In fact, other than not having a shield to spare in the first place, there wasn’t ever a good reason not to wear a shield and just have one hand free.

That’s somewhat authentic, of course, since shields apparently were essential on medieval battlefields. On the other hand, we want to give you, the player, choices. We don’t want every single Battle Brother to be equipped the same. Not wearing a shield doesn’t need to be equally as viable as wearing a shield all the time, but there definitely should be situations where it makes sense and where you have to make a choice that isn’t a no-brainer.

We’ve now introduced the concept of “Double Grip”. When equipped with a one-handed weapon and having the off-hand free, Battle Brothers (and for that matter, many enemies) will use both hands to swing their weapon and enjoy a significant damage increase. From now on, in situations where you favor increased damage over increased defense, whether in your spearwall or when fighting a single powerful enemy, you can just order your men to put their shields on their backs and swing away with full force. As it happens, this is also a small piece of additional historical accuracy added, as a lot of weapons were actually long enough to be used both with one or with two hands. We’ll see how it works out in the game as time goes on, but already we’re quite satisfied with the added gameplay options and authenticity.

New Weapons
In the wake of the new damage system we also implemented two new weapons into the game. Of course, like all weapons, they come with their unique skills that should give them a tactical niche of their own.

The Warhammer
This weapon is designed to be as effective as possible against armor and thus will be more important in the later stages of the game when armor will be more common. The base damage is moderate but it does a lot of damage against armor. The warhammer’s skills support this design even further. 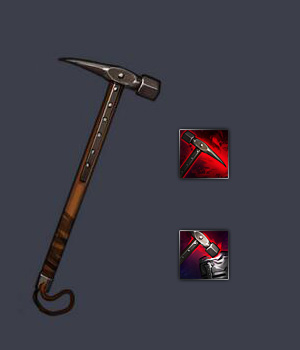 The first skill, “Batter”, is an attack with the sharp side of the hammer. On top of any armor damage done, it always also inflicts a small amount of damage to hitpoints, no matter the armor protecting the target, by the mere force of impact.

The second skill, “Crush Armor”, does exactly what it sounds like. The hammer is used to batter, deform, rip and otherwise render the target’s armor unusable. It does no damage to hitpoints other than a small amount with every hit by the force of impact, just like “Batter” does. However, it inflicts double the warhammer’s damage to armor. This skill excels against heavily armored targets and is best employed to destroy armor before engaging with other weapons.

The Military Cleaver
The military cleaver is a version of a regular cleaver used by a butcher but designed for warfare. It is not well suited against armored opponents but it can rip terrifying wounds on unarmored targets. 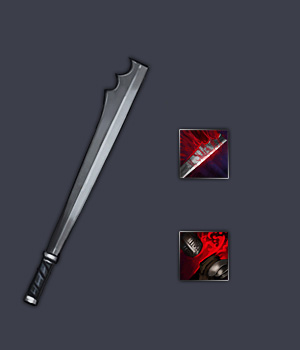 The first skill, “Cleave”, causes bleeding wounds that inflict additional bleeding damage over the next two turns if the attack does any hitpoint damage at all (i.e. isn’t completely absorbed by armor).

The second skill is called “Decapitate”, an attack aimed right at a target’s neck. It does more damage to hitpoints the more the target is already injured, and therefore is an excellent finisher for already wounded opponents, especially those that have a lot of hitpoints. If the attack kills the target, it is decapitated and you can see it’s head flying through the air! Yeah, we just added that feature, but see the next point for details.

Fatalities
Dealing the killing blow to an enemy now has a chance of causing a so-called fatality effect. Fatalities differ for each weapon type. For example, bladed weapons can decapitate and gut a target, and blunt weapons can crush the head. Different skills also have a different likelihood of causing these; the “Decapitate” skill will always decapitate, and the “Swing” skill of Greatswords has a higher chance to do so than the “Slash” skill of one-handed swords.

Fatalities serve two purposes. First, they portray the fatalism of our pseudo-medieval engagements, especially in light of our perma-death mechanic. If your favorite veteran Battle Brother dies now by getting his head chopped off, it should hurt even more. A medieval battlefield really is no picnick. Second, there are actual gameplay effects, at least when fighting the undead. Necromancers are unable to raise the bodies of characters that have been decapitated or their head smashed in. Grabbing those cleavers could be a good option when fighting an army of zombies! 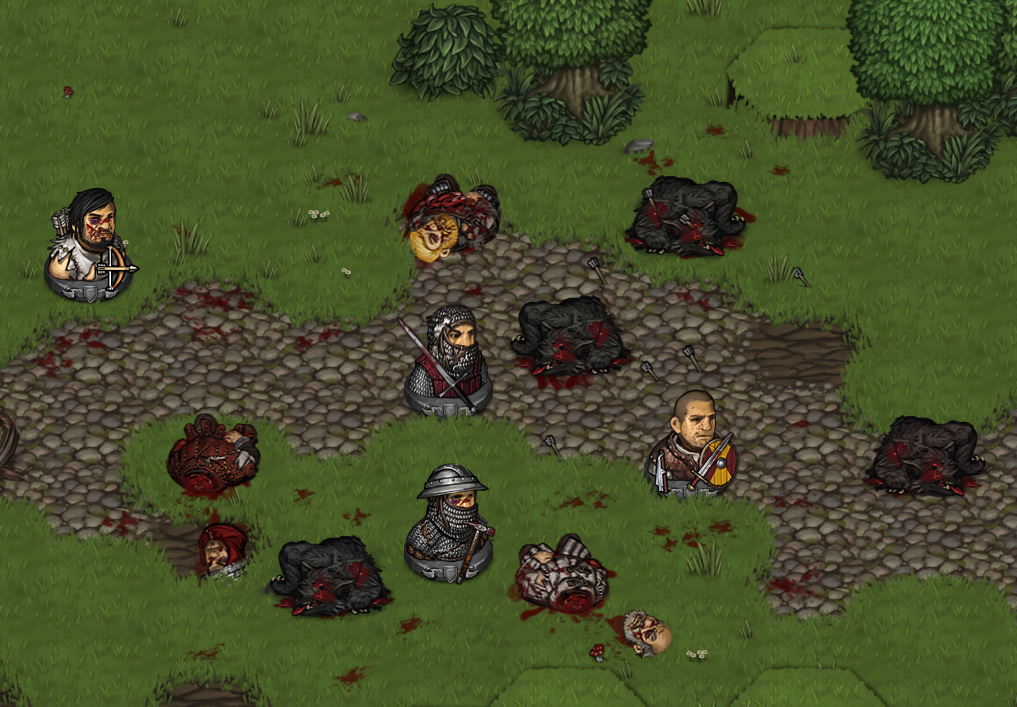