The undead are the first major faction we presented you out of several more that we have planned. It is also the faction featured in our tactical combat demo. Today, we’ll present you the two latest additions to our undead roster.

A major consideration when designing any opponents is to have them add some unique gameplay element so that fighting them feels distinct from any other opponents. We feel that having different challenges in combat is essential in a combat-heavy game as ours, and for this reason our newest additions of course have their own set of skills and AI behavior that should challenge the player to adapt in order to survive.

Let’s see what we’ve come up with..

Just last week we’ve talked about morale and psychological warfare. This week we present you a new opponent designed around these mechanics: the Lost Soul. These creatures are the unresting souls of the long dead that haunt certain places, often a fateful part of their own tragic demise, and can occasionally be bound as servants by more powerful necromancers. 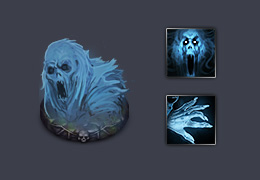 Lost Soul with its skills horrific scream and ghastly touch.

But what does make the Lost Soul different?

Incorporeal
Lost Souls are unique in that they exist in part in the physical world and in part in the world of ghosts. They constantly shift between the two, yet can find peace in neither. With their visuals we tried to capture their lore of being torn between two worlds; they constantly change in contour, one moment just a hazy mist, the other a grotesque face manifests.

Being incorporeal, Lost Souls are very hard to actually hit and damage. Many times weapons will pass right through them as they shift out of the physical world. However, since they can also never have a strong physical presence, a single attack that does strike true will end them.

Due to their pervious nature they travel easily on all kinds of environment and never receive a movement penalty from difficult terrain. Like other undead, they are also immune to all morale effects and are not bound to the limitations of stamina and fatigue.

Horrific Scream
Lost Souls can raise their unearthly voice to screech a horrifying scream, challenging the courage of all mortals. This is a mental attack against a single target who instantly has to pass a morale check, a dice roll against bravery. Upon failing the test, the target will flee in panic for at least one turn, unable to perform any action.

Neither shield nor armor are of any help against this kind of attack. Instead, having a high bravery is the best defense, as is being near allies who can defend a helplessly fleeing Battle Brother. We also have a few perks and items planned which will shine against an enemy as this. With Horrific Scream, we want Lost Souls to bring a different aspect to tactical battles – an opponent who directly attacks your Battle Brothers’ morale, and which feels distinct from physically-oriented opponents. In bigger battles, Horrific Screams can shatter your shieldwall from afar and allow other undead troops to take advantage of the confusion in your ranks.

Ghastly Touch
As Lost Souls reach out with their ghostly hands, they permeate any armor and can outright mortify the tissue they touch. This attack does not do a lot of damage on a single strike but it ignores armor altogether, reinforcing again that a very much physical concept such as armor is meaningless against an opponent for whom physical obstacles mean nothing. Armor is useless when fighting Lost Souls, and the battle is very much a mental one.

Ghouls are despicable creatures that scavenge graveyards and burial sites for fresh graves where they dig out the recently deceased and feast on their corpses. This is why any band of undead is often accompanied by ghouls just like a fishing boat attracts hungry seagulls – even though ghouls are not technically undead, but living and breathing creatures that also feel pain and are susceptible to morale effects. 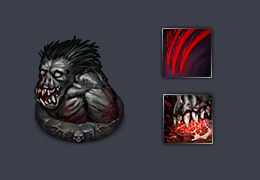 The ghoul with its two skills claw attack and gruesome feast.

In combat a ghoul is neither very strong nor dangerous alone, as he has no armor, has only his claws to attack with and rather low morale. A lone ghoul isn’t even that keen on attacking your Battle Brothers. Unfortunately, ghouls almost always appear in bigger flocks. Even more unfortunate, ghouls possess the ability to feast on fresh bodies in the midst of battle, thereby quickly regenerating their health, and worse.

Let’s take a look at the ghoul’s active skills.

Claw Attack
Ghouls have long and sharp claws at their hands that they use to dig through the earth in search of food. These claws can tear grievious wounds and are often infected with all kinds of diseases. The claw attack is a quick attack that does a reasonable amount of damage but is not very well suited to cut through armor.

Gruesome Feast
The ghoul tears apart a fresh body on the battlefield and devours it, quickly healing his wounds and growing in size and strength. Devouring a body takes up a whole turn, but a ghoul is never satiated and will canibalize even the dead of his own kind. For every body a ghoul feasts on, he will continue to grow in size, strength and aggressiveness. Leaving ghouls to freely consume all the dead can quickly spiral out of control, leading them to grow to enormous sizes. Instead of fighting the cowardly scavengers they usually are, you could end up fighting hulking behemoths that look to swallow your Battle Brothers whole.

Ghouls should add another level of consideration to any battle they are a part of. Leaving your dead to charge after those retreating skeleton bowmen can mean scavenging ghouls having a feast. And you having a big problem. Small ghouls can easily be chased off, but can you afford this in the midst of battle?