We’ve gotten many a question regarding the enemy diversity in Battle Brothers. Until now we always had to put off these questions – but not any longer. We present to you the first major faction after the Undead: The Orcs!

The Orc faction has unique characters, skills, weapons and most of all tactics compared to the Undead and will force the player to challenge everything learned before. Lets get into some details.

As long as humans remember there have been tensions with the wild Orc tribes that roam the surrounding lands. Orcs live as nomads, constantly on the move to support themselves by hunting, gathering and raiding anyone weaker than their tribe. They do not possess knowledge of agriculture or mining, relying instead on taking what they need from others. Indeed, Orcs are quick to take up weapons, and in Orc culture, he who spends time gathering, crafting or building when it is easier and faster to just take these things away from others is considered simple-minded. Life for an Orc, then, is to a large part establishing dominance over others and taking things for him or herself.

Although there are many distinct Orc tribes out there, they have a lot in common. They usually are ruled by the most powerful Orc in the tribe, a Warlord, that ascends to leadership by brute force and has to defend his claim also by leading the tribe to greater spoils. Therefore, different Orc tribes are constantly feuding each other and any alliances are usually short-lived. 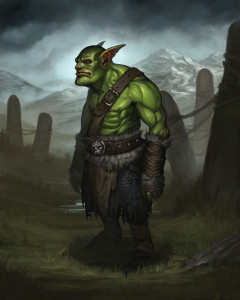 As human settlements began to spread out, confrontations with the Orcs started to escalate quickly from smaller skirmishes into a full-out Orc invasion and subsequent war. The war ended with a costly human victory which had the Orcs withdraw from the settled lands and back into the wild. There, it didn’t take long for the Orc tribes to begin feuding each other again and lose sight of the human lands. This is where they stayed until now, except for occasional raids on outlying farms and villages. Yet, many a man and woman live in fear of the day that the Orc tribes unite again and start an invasion, leaving nothing but burning rubble in its wake.

To make matters worse, Orcs are technically just one half of a larger faction, the Greenskins, with the other half being the Goblins. However, both Orcs and Goblins are highly autonomous and you’ll only see them work together on rare occasions. One such occasion is an invasion, with the Greenskins being the Greater Evil in your game of Battle Brothers.

In battle Orcs tend to rush at the enemy and overwhelm them with the sheer power of their assault. Those who still stand after the initial onslaught find themselves disoriented and in a complete chaos. After the battle line has been dissolved, Orcs that put themselves in a battle frenzy by meditation and drugs rush in and finish what is left of the disorganized and shocked defenders. 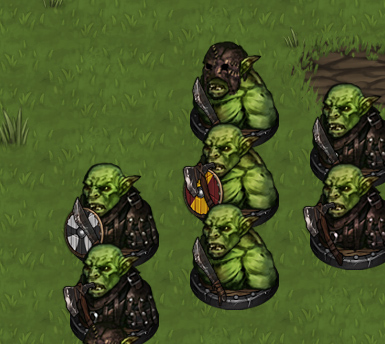 Young Orcs on the way to battle

In Battle Brothers, Orcs are physically stronger than humans. An adult orc towers a human and has the strength to use weaponry and wear armor with great effect that would quickly tire out any human. With their strength, they also gain a percentage damage bonus to every attack – less for young Orcs , and more so for adult ones. While Orcs are subject to fatigue and morale, just like your Battle Brothers are, they have plenty of both, and it takes a while for an orc to run out of steam or realize that a battle has turned against him.

For many Orcs , their physicality is also expressed in their Charge skill. With this skill, Orcs can charge a Battle Brother over a short distance and hurl themselves against their target, stunning it for one turn. A Spearwall can repell charging Orcs and a Shieldwall can offer some protection against being stunned from the impact – but shields don’t have a high life expectancy against Orcs, as their damage bonus also applies against shields.

Orcs focus entirely on the offense, where they excel. They use their skills to crush the player’s battle line with raw force and have it quickly dissolve into a chaotic frenzy where they generally have the upper hand. For this reason, meeting an Orc warband head-on in open battle is usually a bad idea and will leave you at a disadvantage. On the other hand, Orcs neglect defense; while some of them will carry shields, they seldom make active use of them, prefering instead to attack. Due to their reckless fighting style and just physically being big targets, they’re also easier to hit than other opponents. In prolongued engagements, or in up-hill battles, where defense matters more than offense, Orcs may suddenly see themselves at a disadvantage.

Orcs have their own distinct weapons and armor they wear, which matches their physique. They do know how to craft metal but are not particularly good at honing and refining their works. This is why Orc weapons are usually very heavy and lack balance – although the player can loot and use these weapons, they’re clearly not made for use by humans and are hard to use effectively but for the strongest of Battle Brothers. Orcish armor, however, can not be used by the player. The physiology of Orcs is just too different from humans, so no helmet or piece of armor would actually fit. 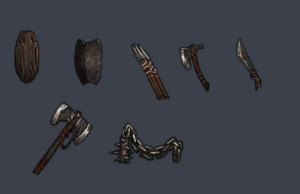 A variety of Orc weapons

The rough and big Orc hands do not allow them to use ranged weapons like bows to great effect, and neither does it fit their mentality. They resort therefore to throwing weapons like javelins that have limited range but can inflict high damage also to armored targets and may even damage shields if they hit those.

Young Orcs make up the back bone of Orc society, as Orcs usually don’t have a high life expectancy but are quite reproductive. They have relatively bright green skin because Orc skin tends to start out bright and gets increasingly darker over the years. Young Orcs are ferocious fighters that make up for their lack of experience and skill with pure strength and recklessness. You’ll find them armed usually with one-handed weapons and sometimes light shields. Since they’ve yet to prove themselves and lay claim to spoils of battle, their equipment will consist of different types of leather armor that Orcs have the resources to produce themselves, and sometimes no armor at all. They’re armed with lighter Orc weaponry and human weapons and shields they’ve scavenged from the fields of battle. 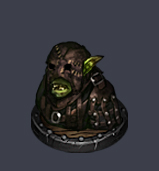 If a Young Orc survives long enough to grow to adult age, he may eventually become an Orc Warrior. As evident from their darker skin color and collection of scars, these seasoned fighters have a lot of combat experience and skill in addition to their great strength. Years of gathering spoils from raids and battle have allowed them to collect enough metal to have it melted and made into heavy metal armor, large Orc weaponry and often very heavy and durable metal shields. 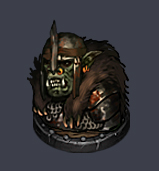 Orc Warriors, perhaps also due to the massive armor they wear, do not charge opponents. Instead, they simply march into enemy ranks with their shields in front, pushing enemies out of their way and walking through an enemy battle line unimpressed in order to break it. It takes a formation two ranks deep to push against an Orc Warrior doing this, as one or even two humans alone can not compete in pure strength with an adult Orc Warrior.

Berserkers are Orcs that put themselves into a battle frenzy by taking drugs, potions or by hypnosis – and some of them are just straight up crazy. They can occasionally be found wandering alone on what could be described as pilgrimages to slay particularly dangerous beasts. If they succeed, they may wear parts of the slain beast as decoration, possibly also in the belief that it confers powers to them. However, other than these trophies, they don’t wear any armor. Instead, some of them cover their body with war paintings that are supposed to channel the energy of spirits to protect them. Due to this, many berserkers have their bodies littered with scars telling of their exploits. 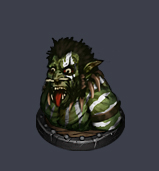 The unique ability of the Orc Berserker is that each time he hurts or kills an opponent, he gains “battle rage”. With increasing battle rage, he gains damage to his attacks, increased bravery and initiative, and damage resistance. Each turn he loses some rage again. A berserker that can repeatedly hit or kill opponents and become enraged can spiral out of control and be very hard to take down.

Berserkers use a variety of Orc weapons, but no shields. Their most fearsome is a long and heavy chain with a big weight or striking head at the end that they swing recklessly around, mowing down foe and friend alike. Other Orcs respectfully prefer to stay clear of them if they can, especially if they swing around one of those chains. This often leaves Berserkers to fend for themselves at the flanks of a battle, just as they appear to hold a special position in Orc society outside of battle. 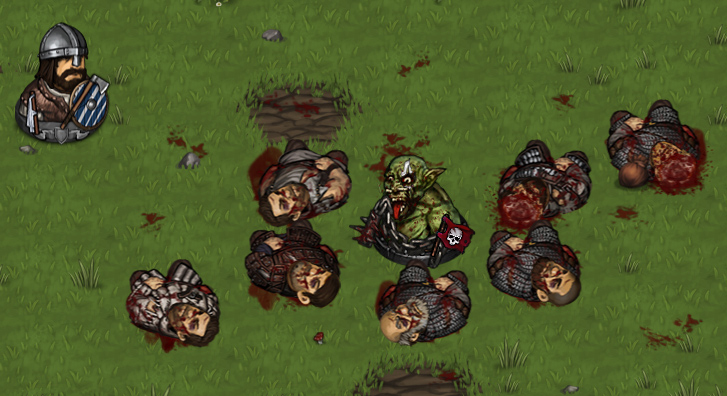 Those have been just three types of Orcs, but we have several more in store. Also, we’ll present the Orc faction in action in a commented gameplay video soon!

Until then let us know what you think about them so far and if you have any ideas for any additional Orc weapons, skills or classes!