Time sure flies by fast! It’s been a full month now since we announced that we’d go full time and needed some weeks to get everything sorted out. While we took care of business and set up our new workspaces, we were also featured on the Steam Summer Sale for a day. Yay!

We’re happy to let you know that we’re now back in the saddle again. Both Christof (the programmer) and Jan (the manager) have moved to work full time on Battle Brothers. The last of the bunch, Paul (the artist), will join us mid-July. Development pace should now pick up again.

As previously announced, the first item on our roadmap is the introduction of an event system for the game. Today’s update to the game adds just that, so let’s take a closer look…

Managing a mercenary company is not an easy thing. Not only do you need to command your men in battle, now your leadership skills are tested outside of combat as well. It’s easy to forget at times that the little guys you control are supposed to be humans. As humans, they sometimes have their own agenda, they have strengths and weaknesses in character, they may change with time, they may quarrel or bond with each other, and they’ll come to you with requests. While traveling on the worldmap, a lot can happen, much of which we can now convey to you with events. 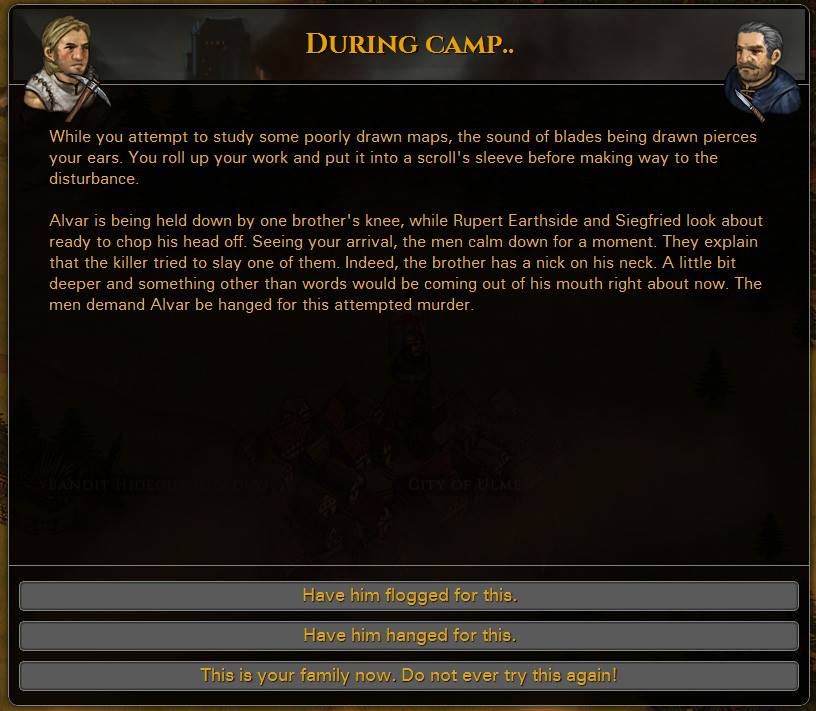 To kick things off, we’ve added 47 events to the game. These include things that you can just stumble upon while traveling the world, some things that require you to be at certain places, as well as things that require characters of certain backgrounds or traits in your party. Some backgrounds may not play well together, and some may have advantages or disadvantages also outside of combat. What choices you have available at events may depend on what characters you have, and the outcome of your choices may differ as well.

Those 47 events are pretty much a vertical slice of what we want to ultimately achieve with the events, showing a bit of everything. Some events are comprised of only a single scene, some are quite complex and contain a dozen different scenes. It’s not nearly enough events yet to cover everything, of course, but we intend to add a lot more as we go along to make for a varied and reactive experience. Keep in mind that as everything else in this game, the event system is in Early Access too, and not finished. Once we add additional mechanics in the future, such as player reputation in the world, we’ll also weave this into the event system to trigger different events depending on your reputation, and to allow for events to change the reputation you have.

Note that you do not have to start a new campaign to have events in your game, your old save should load just fine. However, you’ll get the most out of the events with a new campaign.

Together with the events we also implemented a ‘mood system’ that tracks a mercenary’s current mood on an individual level. This was necessary as many events potentially influence how your mercs feel and how motivated they are. We model this by a scale ranging from ‘euphoric’ all the way down to ‘angry’. A character in good spirits receives a bonus to his resolve while a disgruntled character will probably be more reluctant to risk his neck for you.

For example, a highborn noble gets into a fight with a lowborn servant – depending on how you, as the leader, decide to handle the situation there might be people upset or satisfied in the end. The effect on your mercenaries’ moods adds another layer of consequence to your decisions during events and makes them more meaningful and impactful. Getting all the different characters in your mercenary company to work together can be a challenge in itself.

While we were at it, we also added a few more weapons to the game.

From left to right: Wooden Flail and Reinforced Wooden Flail – agricultural tools turned weapon, these are lower tier variants of the Flail. Woodcutter’s Axe – a two-handed axe meant to fell trees, but will fell men just as well. Warbrand – a hybrid between a one-handed and a two-handed sword.

We’ll keep a close eye on the changes we’ve just introduced and will likely provide smaller but more frequent updates for a while to iron out any issues and make minor content additions. Once things are looking good, we’ll target the next item on our roadmap – the Goblin faction. This will be the largest update to date and come together with a lot of other changes, such as to AI and the leveling system. We want to do as many of these changes as we can in one go, because unfortunately that update will then have to break compatibility with save games from previous versions of the game.