This week’s update adds a new feature to the game – enemies can now retreat from battle! Also, we’ve added a new weapon, a new armor, and a bunch of new events. Existing events have been tweaked a bit for more balanced outcomes and trigger conditions, and the bugs that surfaced after last week’s larger update have been fixed.

Chasing that last surviving bandit marksman on a forest map isn’t always that fun, so non-undead enemies now have the ability to retreat from the battlefield should they perceive there to be no chance of winning the encounter. Just like the player, the AI has to reach the map border in order to retreat safely, giving you the chance to intercept them if you want to let noone escape, or get all the loot.

Whether an AI combatant retreats or not depends on a few factors, such as how many of his allies are still with him, how many have already fallen, and how many men the player still has. For the time being, the AI will not attempt to flee a battle from the beginning, even if they’re outnumbered. The option of retreat is meant for the last few scattered survivors. The actual thresholds for when individual combatants make use of it may still need some numbers tweaking.

We know that this doesn’t solve the issue of chasing enemy archers across the map in its entirety, but it is a good step in the right direction that makes sense in the context of the game world. We’ll eventually introduce a few more tools that will enable the player to better handle such situations.

This week we introduce the Butcher’s Cleaver, a tool used for hacking through meat and bone. It is a low tier variant of the older Military Cleaver and a possible starting item for characters with the butcher background. 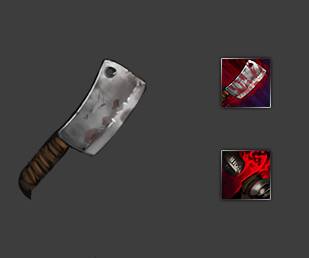