Things are progressing nicely on our end. Many mechanics of the new worldmap are already in place – albeit largely with placeholder visuals and still in need of some refinement. This week, we’ll cover an entirely new and very important aspect of the worldmap rework: Factions. Let’s find out what that’s about!

Battle Brothers has evolved a lot during development, and it has evolved even more so during the Early Access period since its release in late April of this year. One constant for the game is that it will always be fundamentally about managing a group of human mercenaries in a low power fantasy world. What’s changing is how we’re wrapping it in a game that best serves the theme and is the most fun, while at the same time keeping it at a level that is ambitious yet achievable.

As you may be aware, the current strategic open world gameplay was considered to be a milestone along the way to an ultimately more structured game experience. One aligned more along bits of story and one single emerging threat – the greater evil. The concept of a more or less united human world against a single big threat was inherited from the game’s X-Com roots, and was to provide a mid and late game challenge and goal. It’s a sound and achievable concept, and we’re at this point now where we’d implement those greater evil mechanics. So what’s happening?

We’ve been taking a step back to look at how we can best serve the theme of a quasi-medieval mercenary simulation given how the game has evolved, and also in light of our move to work full-time on the game some months ago and the resources now available to us. As it turns out, the game worked out quite well as an open world experience, even as barebones as it still is in some aspects.

Our conclusion is that it’d make for the best game in the long run if we really focused on improving the open world gameplay and make this one of the strengths of Battle Brothers, instead of constricting the gameplay that is already there by forcing the player to ultimately fight against a single threat each game along a much more narrow story path.

It’s for this reason that we’re now introducing multiple human factions to the game. No longer will there be just one implicit human faction – instead, there will be multiple ones each with their own goals and competing with others by means of diplomacy, intrigue and warfare. And it’s you, the player, navigating their sea of schemes trying to make a living as hired swords. As we’re tilting the focus of the game more towards interacting with these factions, you’ll also be fighting more and different human enemies, and we’ll convey more story via completely reworked contract mechanics. But for now, let’s learn about the first kind of factions: human noble houses.

Like most things in Battle Brothers, noble houses are procedurally generated for each new campaign. To give them as much personality as possible we want them to look and feel very distinct from one another. Each noble house comes with a set of different traits that determine their ‘corporate culture’; their goals and their actions in achieving them – which ultimately also means the kind of contracts they’ll offer to the player. While a ‘Warmonger’ may hire mercenaries to aid in open warfare, a ‘Schemer’ may hire the player for some false-flag operation to gain influence over a neutral city.

Noble houses also come with their very own coat of arms. We dove deep into medieval heraldry to make the coats of arms realistic and believable, but we also took a bit of artistic licence to make them easier to read and more catchy. You can see some concept art pieces of how they may look in the finished game below. 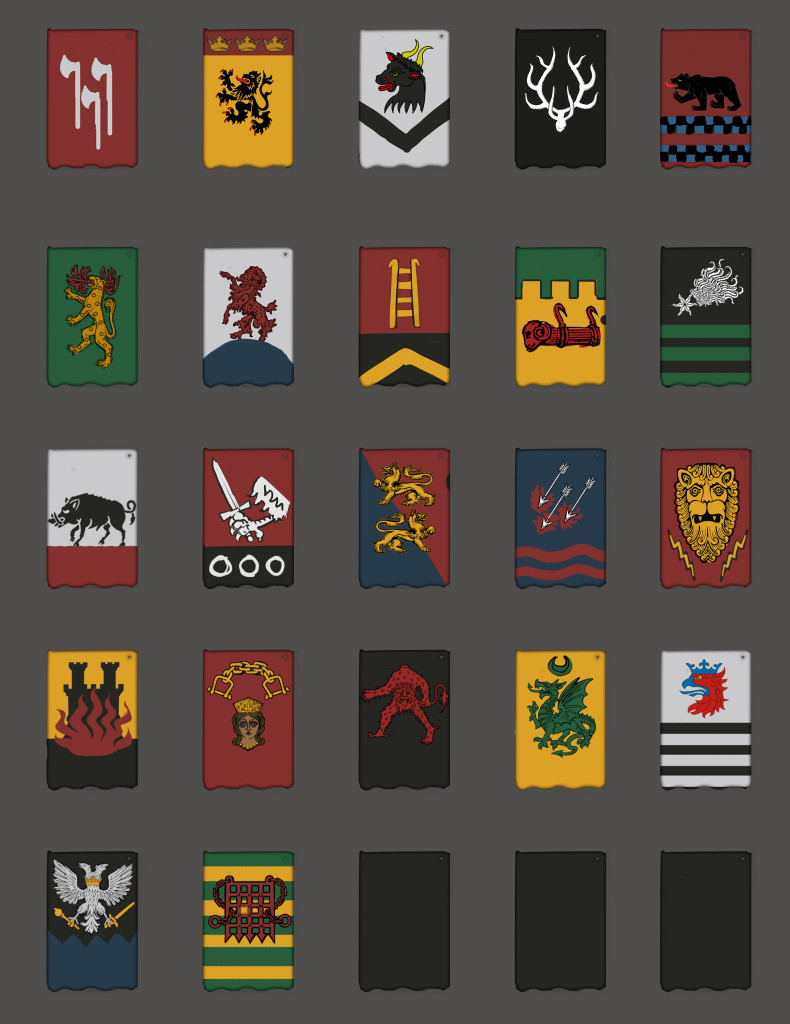 Besides their coat of arms, each noble house will also have a motto. A motto is a short phrase, proverb or word of wisdom that the house identifies with. The motto will usually mirror the character of a noble house, and we’ve based these mottos on historical references as well. A very aggressive house that is bound on acquiring new settlements through war and intimidation might have a motto like “Through arrows and enemies!”. A noble house that is rather peaceful and cares about the wellbeing of its subordinates may have a motto like “Firmly in act and gently in manner”.

With the combination of all the above aspects we’re confident that there’ll be a great variety of noble houses that not only look differently but also feel different on the worldmap, offer different contracts and create new and unique situations in every game. The world of Battle Brothers starts out for now with three different noble houses that are in a kind of cold war state – they do not openly fight each other but are still working against each other in most cases in an attempt to increase their influence based on their specific goals. Mercenaries, of course, are ideal for any operations that must not be tracked back to the noble houses, and not all of them necessarily chivalrous in nature.

Noble houses aren’t the only factions in the world of Battle Brothers. There’s also a new ‘relations’ mechanic, and we haven’t touched on the role of individual settlements for factions yet. And is there still a greater evil around? All this and more in next week’s progress update!