Food connoisseurs rejoice! Provisions received a rework this week and are more diverse than ever. Also, we implemented a system to dynamically mix ambience sounds in the game for a richer atmosphere. Let’s read about it!

Handling provisions is one of those mechanics that are kind of underwhelming. You get why it’s there – the logistics of running a mercenary company should be part of the game – but it doesn’t really add that much. What usually happens is that you’re just every now and then refilling the tanks, if you don’t happen to loot enough provisions anyway, and don’t spend much thought on it otherwise.

We want to try something different with provisions. We want it to be a bit more engaging, requiring a bit more thought put into it, without making it more complex than it should be. 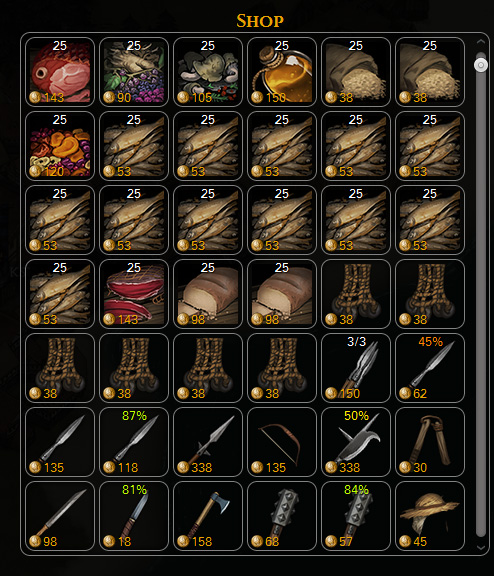 Battle Brothers now has different kinds of provisions – bread, dried fish, smoked ham, mushrooms, and more. All of these come as stacks worth (currently) 25 provisions with different prices and durability. There is no limit to the amount of provisions you can carry anymore, but because individual stacks of food will eventually go bad, you probably shouldn’t buy more than your men can actually eat before it rots away. Don’t worry, though, your men are smart enough to eat first whatever food is about to turn bad next.

The different kinds of food are available at places that fit thematically, so we can further reinforce that a settlement is, for example, a fishing village. You may find the odd overpriced fish inland, but it’s fishing villages and coastal cities where you can get fish cheap and in large quantities. That village with the pig farm will probably sell you some smoked ham, and that small hamlet in the swamp won’t have much to offer other than mushrooms. As a mercenary, you have to adjust your diet a bit to what’s available during your travels.

Since the Early Access launch on April 27th, the game was plagued by some sound compatibility issues because of the 3rd party sound library we used. Some problems have since been solved, some remained. We’ve wanted to replace this library with a different one for some time now, and this week we finally got around to doing it. What does that mean for you?

If you encountered any sound problems or oddities in the past, chances are that those are now resolved. There’s also been an issue of the game stuttering occasionally as music tracks changed on the worldmap, and this should now be a thing of the past as well.

What other cool things can we do now? We created a small system to dynamically mix ambient sounds depending on your surroundings on the worldmap. No longer is music the only thing you hear; if you’re near the coast, you’ll hear seagulls and waves crashing. In the swamps, you’ll hear insects and frogs, and icy winds blow around you in the snowy wastes of the north. At night, you can hear wolves howling in the forest, and crickets in the steppe. We really want you to feel that you’re in that forest that your figurine is standing on on the worldmap. Settlements have their own ambience as well, of course. Not only are there people, dogs, cats, chicken and more running about – if a settlement got a smithy, you’ll hear hammering, if it’s got a temple you can hear sermons, and there’s laughter and singing coming from the tavern even at night.

These ambience sounds really add a lot to the atmosphere of the whole world, make the different terrain feel distinct and settlements much more lively. Of course, reading about this is one thing, actually hearing it is another. That’s why we’ll try to have a preview video of the new worldmap ready for you to watch next week!