Amidst all the sweeping changes to the worldmap, like different human factions and an entirely reworked contract system, there’s also a lot of smaller improvements and additions that will come with the update later in February. These are little things that address some lingering issues or are simply quality-of-life improvements, and it’s some of them that we’ll take a closer look at this week.

That’s right – you can now make camp. Put down your tents, build a nice bonfire and enjoy some of the smoked ham you got at that little hamlet two days ago. When encamped, time goes by faster, so if you’re waiting for it to become daytime, or for someone to arrive, making camp is the way to go. Your men will also recover faster from their injuries and have more time to maintain and repair their equipment.

To make it a more interesting strategic decision when and where to make camp, there’s also some drawbacks to it. Enemies will be able to see your bonfire from afar, especially at night. You’re immobile while camped and can not attack yourself – but you can easily be caught in a surprise attack by the enemy. Best not to make camp in the middle of orc territory, then, but if you must, do so on high ground, like hills, to have a better view of the surrounding lands and to spot approaching enemies before it is too late.

We’re adding the camping mechanic as a way to reduce on the downtime you’d otherwise spend waiting for your men to heal up and their equipment to be repaired – but in a way that makes sense in the context of the game world and adds some decision making. There’s also always the option of adding more depth to camping, of course, and we may decide to do so at a later time.

Handling attrition is part of the gameplay we’re aiming for, and while making camp is a good way to maintain and repair your gear, there’s another way now that’s even faster. Smithies across the world can quickly repair both weapons and armor for you – but generally at steep prices.

Players need a good way to judge the strength of enemies on the worldmap in order to make an informed decision on whether to fight or retreat. Yet, attaching any kind of strength rating to enemies isn’t as easy as it may sound with a game as complex as Battle Brothers, as there’s a lot of unknowns we can’t really account for. What experience and skill does the player have? Is their group equipped or skilled in a way that handles certain types of enemies, like orcs or goblins, better or worse? No matter how we shuffle numbers with the current system, there’s no way we’ll arrive at a satisfying level of prediction, so we’re going another way. 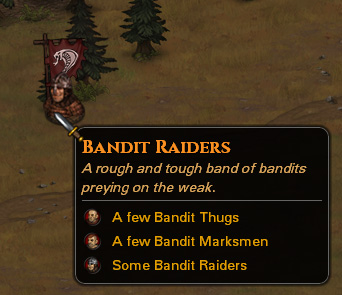 Ultimately players always fall back to judging for themselves what enemies they can take on, so we’re supporting this with a new scouting mechanic with more in-depth information to replace the relative strength label. As enemies or allies get into visual range, you can now see their troop composition and approximate numbers when hovering the cursor above them, just like it is in the engage screen before combat. In addition, their total number is shown in their name tag to see at any time and without hovering over them. It takes some experience judging what your company can take on, and probably some failed attempts along the way, but who better to make the call than their commander, anyway. 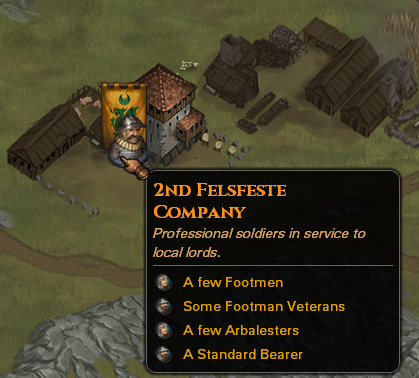 Do keep in mind that this change comes in the context of a new worldmap that has more clearly defined regions as well. With what are safer hinterlands or war-torn regions bordering on orc and goblin territory, you now have a greater level of control over what enemies you’re likely to face, depending on where you have your mercenary company seek their fortune.

There’s quite a bunch of different weapons, armor and other gear in the game to use already, and we’ll keep on adding more. Add to this the all-new treasure items you can plunder, and the new function to filter your inventory by item type comes in handy as not to waste any time managing it. You can choose between showing everything, only weapons, only armor and helmets, and only supplies and treasure.

Also, no need to change screens anymore to sort your inventory while browsing the wares of merchants. Both sorting the inventory and filtering it are available at the shop interface as well. Speaking of the shop interface, performance has been improved and it should feel more responsive now.