As mentioned in last weeks posting we will now shift to longer periods between updates as we go back to tackle the larger issues at hand. This is why there will be no update to the game today. However, we will let you know what we are working on right now:

As promised we are working on more contracts for you to take on in the game. These will come in batches and we have two new in the works for the next larger update. There will be one contract for settlements and one for noble houses with one being about exploration and the other about doing some ambushing for all you highwaymen out there. Of course both will come with their own twists for that extra variety.

Reworking the UI is a rather large task and is still ongoing. On top of that, it will probably keep us busy on the side for quite a while. We are aware that this is not a very spectacular topic and it offers little entertainment for the players but it has to be done better sooner than later as it stands in the way of some planned features.

We have secretly been working for quite a while on a way to get warfare between the noble houses into the game. Currently the noble houses have a rather passive role in the world. We want them to have a real dynamic conflict for superiority with the player being able to tip the scales in a certain direction. However, this is still in an early development phase and you can expect a dedicated blog article on this in the future.

With the tactical combat environments all done we have started working on some objects you might find on the battle maps starting out with camp equipment like crates, boxes, tents, fire pits and so on.

More importantly, we have found a way to implement multi-tile objects in the tactical combat that are basically as large as we want them to be. These objects now offer the possibility to have small buildings like ruined huts, crypts or tents on the battle maps. This way locations on the worldmap can be displayed in the tactical combat for more interesting combat environments. Imagine a camp surrounded by palisades with only small entrances or a graveyard with a crypt surrounded by lots of graves and tomb stones. Here is a first look at what you can expect: 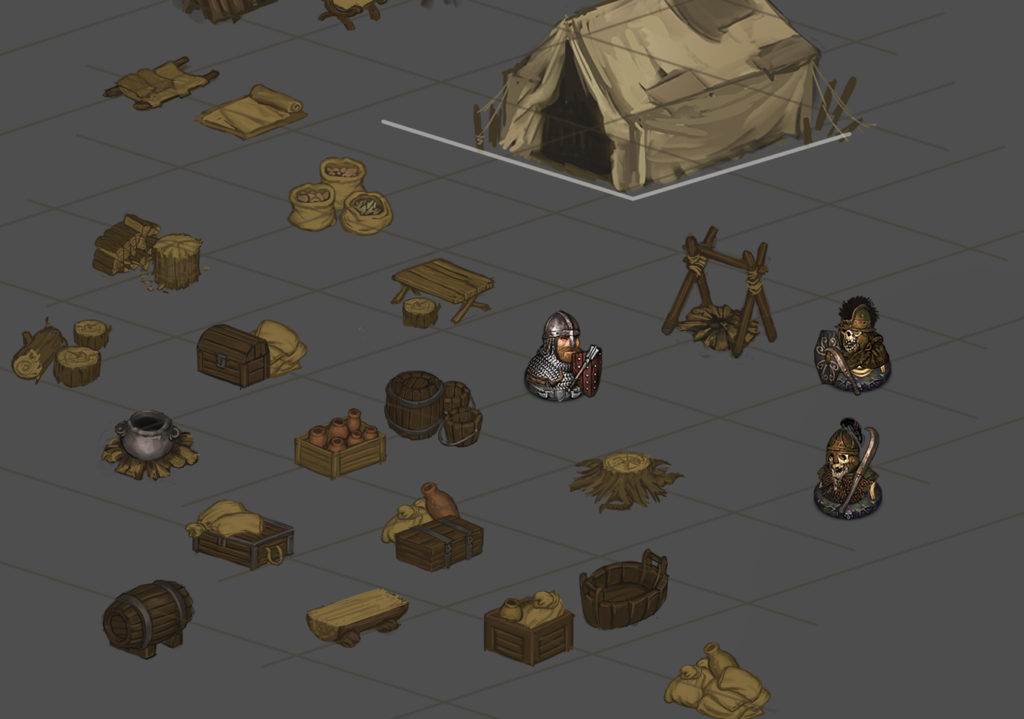