We’ve put to rest the old skeletons only to resurrect them as the ‘ancient dead’. This week we’re taking a tour through their new lore, weapons and armor, fighting style and enemy types. Let’s delve in!

The very first opponents in Battle Brothers were the undead. They were a good starting point for testing combat mechanics and developing the AI, but this early in development we didn’t yet put as much thought into their design as we’d do with later opponents. Moving on to develop orcs and goblins, we made sure that those had a certain level of cultural background reflected in their visuals, and in their choice of weapons and armor, and that they had a fighting style of their own, one that challenges players in unique ways and requires different tactics to beat reliably. In contrast, there isn’t really anything unique about how skeletons fight in the game, or about how they look. They’re just your generic fantasy skeletons – until now.

The world wasn’t always like it is now. Ruins dot the map, mass graves, sunken castles. But where did they come from?

Many hundred years ago, in a different era, an empire of man spanned much of the known world. What has fallen into ruin now, what was abandoned to nature and beast, what has long been forgotten, all this was that of man once. An empire, not of petty noble houses, but one of a dozen provinces, from the frozen tundra of the north to the blistering sands of the south, of a dozen peoples under one banner.

So many peoples, so many cultures and ideas under one roof, all vying to pull the empire into a direction of their own. Could those not be reconciled? Did they, in the end, just pull the empire apart? As remote lands became provinces of the empire, so could local cults become religions that swept across its entirety. Was the authority of the emperor lost to religion? Was it the gods that punished man for worshipping spirits that promised to give what they would not?

Does it matter now what brought it down? The ancient dead are rising again, not living and yet not dead. Long lost legions heed the call of their emperor. They march once more, tirelessly and without emotion, to claim again what was once theirs. What brought down the empire in the end, and what is bringing it back to unlife, is for you to piece together based on clues hidden within the world, if you want to learn more.

The bulk of the ancient dead is made up of the ancient legions. They are what conquered most of the known world once, and they may well do so again. Legions that never tire, legionnaires that know no fear, a cold machine that ever marches forward. What could stop them? 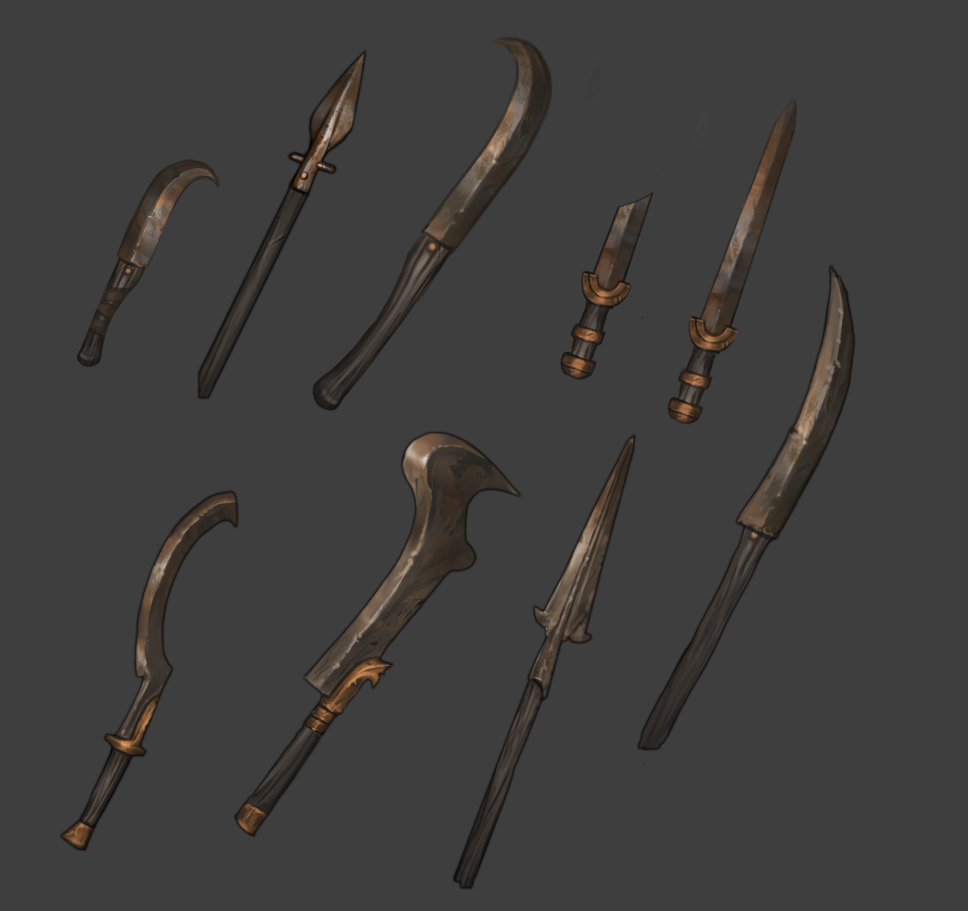 The legions fight like they did hundreds of years ago – in tight formation two ranks deep, with shields in front and polearms in the back. They rely quite heavily on the front row providing protection with their shields and locking down the enemy, while the second row uses polearms to inflict heavy damage on their opponents. A formation like this doesn’t charge like undisciplined rabble, but advances slowly and makes heavy use of shields to protect against arrow fire. They don’t possess any ranged weaponry and don’t do flanking maneuvers, preferring to simply walk through any enemy. Because much of their strength is in their formation, they’re at a disadvantage when fighting in difficult terrain, such as forests. They are also the missing piece of the puzzle that makes resolve an important attribute, as fighting them continually puts a test to the morale of the men. 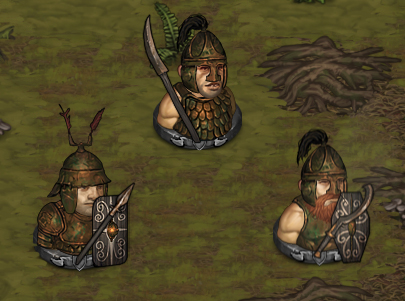 The ancient legions come with a whole lot of unique armor, helmets and weapons. It’s old, it’s brittle and sometimes broken, but it can still be deadly. All of it, except for some cloth rags, is lootable and can be equipped by your Battle Brothers.

Recruited from local vassals was the light infantry, the ancient auxiliaries. Because Battle Brothers, at least for now, focuses on a pseudo-germanic region of the world, the equipment of these auxiliary troops is based on the look of ancient germanic and celtic warriors.

An auxiliary is armed with spear, short sword or falx – a new weapon unique to them. They’re lightly armored, often just with the remains of cloaks sporting the pattern of their ancient clans, and sometimes helmets passed down through the family. Time has taken a toll on both weapons and armor, and so you may find them attacking with broken swords seemingly unaware of it

Ancient legionnaires make up the medium infantry. Once professional soldiers, legionnaires enlisted for several years to be trained and used in the empire’s campaigns in exchange for land they could settle at and call their own. Legionnaires are well-armed with metal armor, sword and shield, or pike. 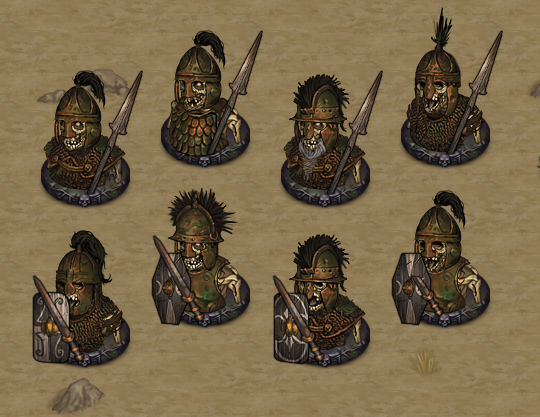 Legions from all the different eras of the empire answer its call, so you’ll find legionnaires that died a hundred years apart, all with different armor, helmet and shield design, to march together.

Recruited from the ranks of veteran legionnaires are the ancient honor guard, once used as personal bodyguards and as heavy infantry to tip the scales of battle. The highest honor a common legionary could hope to achieve, joining the honor guard involved a symbolic death to shed the weakness and frailty of man, and being transformed into a tool of the emperor. No longer a man, but the manifestation of the emperor’s will, the honor guard was encased entirely in armor that did not show any flesh, becoming essentially a living, moving and fighting statue.

Honor guards make use of heavy weaponry from all corners of the ancient empire, such as the warscythe, the rhomphaia and a two-handed cleaver. They were once among the finest and most dedicated warriors of their time, and although now but bones in rusty armor, their skill still echoes through their every swing of the sword.

We’ll conclude our presentation of the ancient dead in next week’s dev blog with the overhauled vampire, as well as the introduction of an entirely new enemy to fight against. How exciting!