This week we’re talking ‘ambitions’, a new feature and part of the overarching campaign goals as announced on our roadmap to the finish line. What are ambitions and how do they work? Read on!

Battle Brothers is a game about leading a mercenary company. It’s also an open world game that relies heavily on replayability. When it comes to introducing overarching goals to the game, then, a linear story would quickly conflict with replayability, and any story straying from the mercenary narrative would quickly feel artificial and conflict with what the game is supposed to be about. Maybe you care about saving the world or the fate of some princess, maybe you don’t, but it’s for you alone to make that call, and we don’t want to force you into a story that may not align at all with how you want to play a game that should be about your mercenary company. Indeed, the one constant in every campaign, and the one constant for everyone enjoying the game, is building up your own mercenary company, and that’s why this is and will be the overarching goal of the game.

We’ll be introducing 3 different aspects to support this further and give you more sense of purpose, progression and challenge; ambitions, the ability to finish your campaign by retiring from your company, and late game crises. Each of these will be covered in detail in the weeks to come with their very own dev blogs, and we’re starting things off by taking a look at the first of these aspects today: ambitions.

Not surprisingly, players approach the game quite differently. While some easily motivate themselves to build up their company and pick up challenges on their own for dozens of hours, if not more, others crave for being provided with more direction and structure. We’re introducing ambitions as mid-term milestones for you to work towards on the path of forging a legendary company in a way that fits the game’s narrative and lets you earn unique rewards. 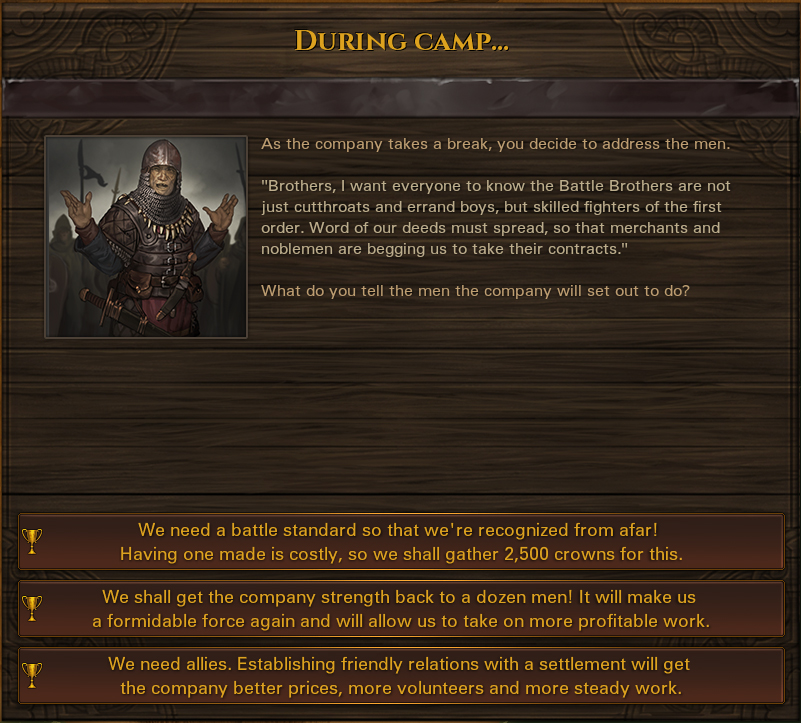 After the first few days of a new campaign, you’ll now be prompted to choose the first ambition out of many to come. This is framed as you gathering the men and giving an inspirational speech on what to do next, because the men care about the company succeeding as much as you do. As their commander, however, it falls onto you to choose the path that the company is to take, and we always want to give you multiple options to choose from. The ambitions you can choose from vary with the state of your company, the world, and the ambitions you’ve already fulfilled. The current ambition is then always shown to you on the worldmap, and the tooltip will offer additional information on how to fulfill it and what reward to expect.

In the beginning, ambitions are more small-scale and somewhat tutorial-esque, like getting the company to a strength of a dozen men, or gathering crowns to have a battle standard made. As the game progresses, ambitions transition to more mid-term goals, and eventually things like stopping a greenskin invasion to leave a mark in history. Fulfilling an ambition will raise the mood of the men, raise your renown (which works differently now – more on that in a future dev blog!), and often comes with unique rewards you can’t otherwise attain. For example, the ambition to have a battle standard made will reward you with a unique item based on your company’s banner to take into combat, while another may change your look on the worldmap. 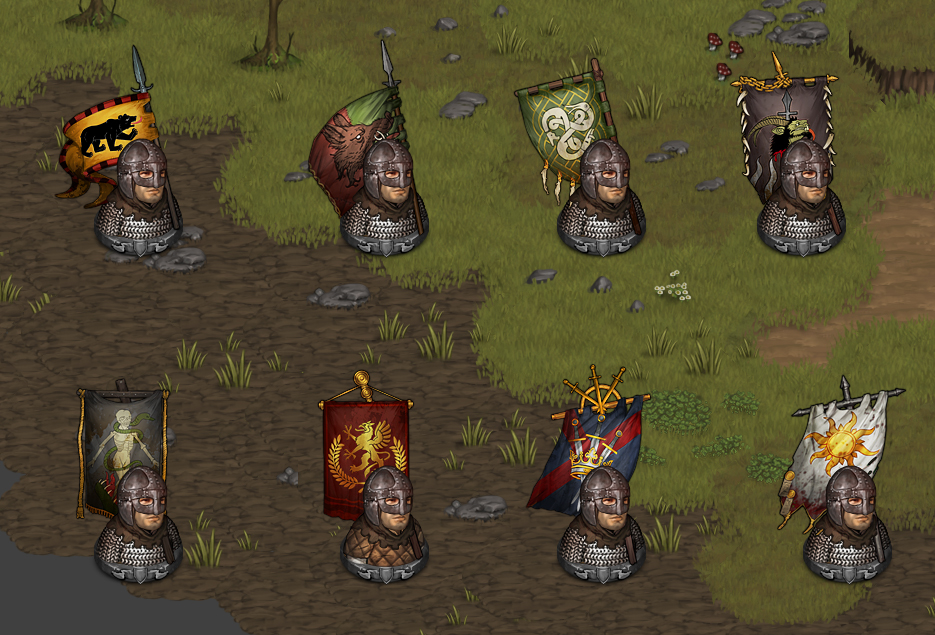 If you fail to fulfill an ambition for a prolonged time, however, the men may lose confidence in your leadership, and their mood will suffer. Being a good mercenary commander also means making good on what you promise to the men.