The upcoming ‘Beasts & Exploration’ DLC will add a variety of new beasts and related creatures to the world of Battle Brothers. We’re going to introduce new opponents to cover the early, mid and late game. Some of them will be pretty complex to fight, and others more straight-forward. Some will be magical creatures, and some plain beasts, but all of them will come with their own unique mechanics to challenge you.

To start things off, we’ll be taking a look at the Hexe today. It’s the first of two upcoming spellcaster type opponents we’re adding, and intended for spicing up the mid to late game. Let’s roll!

The Hexe is a witch inspired by Grimm’s fairy tales, a malevolent old crone living in swamps and forests outside of villages alone or in a coven with other Hexen. They’re human, but have long sacrificed their humanity for otherworldly powers. They’re feared, but also worshipped by some. They’re burned at the stake, and yet people seek them out to plead for miracles. They lure and abduct little children to make broth and concoctions out of, they strike terrible pacts with villagers to receive their firstborn, they weave curses and cast hexes. Their huts may or may not be made of candy. With her sorcery, a Hexe can enthrall wild beasts, and even warp the mind of humans, and so will often be found in the company of creatures that serve her.

The Hexe has two skills in combat. The first one is called ‘Charm’ and works like this: From her shriveled lips, the crone blows one of your men a seductive kiss to bewitch their mind. A strong-willed individual can resist with a successful resolve check, but otherwise they’re doomed to have their senses warped and to fall under the spell’s dominion for several turns until the effect wears off. To the ensorcelled, the Hexe no longer appears as an old crone, but a youthful lady with radiant beauty for which they will gladly obey every command. They’ll be eager to shield the witch from arrows with their bodies, and not think twice about hacking their comrades to pieces in order to protect their beloved. Should every last man on the battlefield be mind-controlled by a Hexe, the coven will have them all commit suicide in order to end the battle.

Even though the Hexe is old and fragile, has no melee attack, and in fact no Zone of Control, she isn’t quite defenseless. Her second skill is also a spell; it’s called ‘Hex’ and can be cast on one enemy at a time. Anyone that has a hex cast on them is cursed to feel the same pain and receive the same wounds as the Hexe does. It’s mutually assured destruction when the Hexe defends herself by giving you a choice: Attack her, and risk the health and potentially even life of one of your men, or let the hag live for another round, hoping that she doesn’t do too much damage in the meantime and that you can get her before she casts another hex. Or at least casts it on someone who can take a blow for the team. 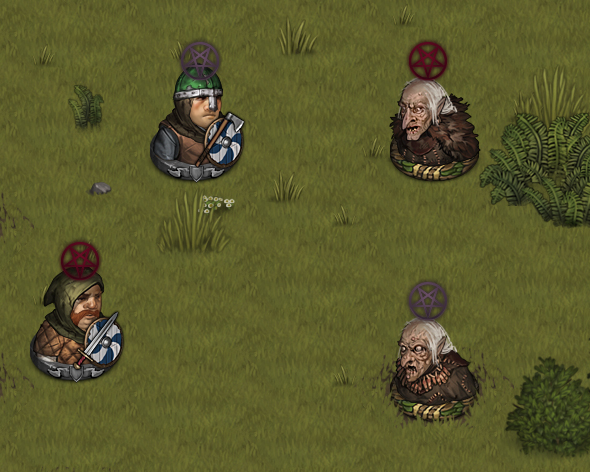 Fighting a Hexe is different from fighting most other opponents in the game. For starters, the stronger you are, the stronger the Hexe gets, as you’ll spend a good time dealing with your own men turned hostile. Her two skills also make for a more puzzle-esque battle than usual, but the right approach can turn a seemingly impossible challenge into a manageable one. Maces and nets are useful for disabling your own men while they’re charmed, rushing or taunting the Hexe can be effective, and having solid resolve is always helpful. What tactics can you come up with to beat her?

Join us again next week for a look at a new beast that you’ll soon be able to meet on the field of battle – one that uses brute strength and not trickery of the mind.