What is Battle Brothers?

Home / What is Battle Brothers?

What is Battle Brothers?

Here we will give you insights into the development process and keep you updated on our progress, the mechanics of the game, features we are about to implement and all that jazz. You are welcome to let us know what you think in our forums or just give us a shout on our social media channels: facebook, twitter and youtube.

Currently the game is in Pre-Alpha stage but we are planning on doing a public Pre-Alpha test in the near future to get your feedback – so stay excited! To get a first overview check out our pre-alpha-gameplay-presentation on youtube.

Battle Brothers is a challenging turn based strategy RPG mix for PC, Mac and Linux. It is being developed by Overhype Studios and is in pre-alpha stage right now. The gameplay is inspired by such classics as X-com: UFO Defense and Jagged Alliance.

You take on the role of a leader of a band of mercenaries and adventurers on the hunt for treasure, fame and legendary artifacts. As you journey onwards, an epic scale invasion unfolds that leaves nothing but burning rubble in its wake. You and your Battle Brothers emerge as the people’s last hope to unravel the source of the invasion and strike at its heart. Will you turn out to be an able commander using cunning tactical outfits to emerge victorious, or will you fail miserably sending your men into a futile bloodbath? It is up to you, but be careful – every decision matters.

The game consists of a strategical layer, or worldmap, and a tactical combat layer. On the worldmap you can choose where to travel next in order to find places worth looting, enemies worth pursuing or towns to resupply and hire men at. This is also where you manage, level up and equip your troops, craft equipment and engage in discovering ancient mysteries through study of dusty tomes. Once you move close to an enemy force or potentially dangerous place you will switch to the tactical combat map where the actual fighting takes place. Both the worldmap and the combat maps will be procedurally generated so no two playthroughs will ever be alike.

Further down you find a feature list, but keep in mind that the game is still in Pre-Alpha and the list may change at any time. 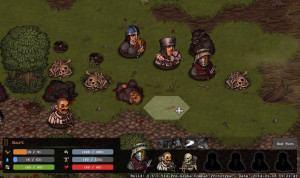