It’s been one month now since Battle Brothers graduated from Early Access and was released a finished game into the world. Let’s talk about what’s next!

Development on Battle Brothers will continue as we start working on the 1.1 update. It’s going to be a moderately sized one that adds lots of little things that didn’t quite make it into the release, like some additional events and contracts that were left on the cutting room floor, as well as various quality of life improvements suggested by you. By now, some balancing and pacing issues have also come to light which the update will address. The update will be free and not require you to start a new campaign.

As mentioned previously, all of us are going to take some vacation at different times over the course of the next month or so. For this reason, we can’t give an exact ETA of when the update will hit. We’ll also not resume our weekly dev blogs for this, as there won’t be any new game mechanics to talk about. By the time the update has been finished, we’ll have come to a decision on whether we’ll continue to develop Battle Brothers with a full-sized paid expansion/DLC or move on to develop a new game.

After careful evaluation and talking with other developers, we’ve come to the conclusion that supporting additional languages for Battle Brothers is not something that we can do. As much as we understand that people want to play the game in their native language, at the end of the day we’ll have to make financially sound decisions if we want to keep developing Battle Brothers, and at some point a new game.

So what’s the issue? You’re probably aware of how we chose the game’s particular art style due to our limitations of having only a single artist on the team (if not, you can read about it here). It’s the same with programming. Battle Brothers is a very ambitious project for so small a team, and with only a single programmer we had to cut a lot of corners in order to ever get it to the finished and stable state you’re now able to play, especially as the game started out as a hobby project alongside our day jobs. Lots of things had to be sacrificed along the way, including any support for localization.

There’s more than 250,000 words now in the game (that’s more than half of what The Witcher 3 has!), and in many places, like character backgrounds, we combine various pieces of text to produce new ones. This works fine with English grammar, but it falls apart quickly as we move to other languages. Supporting other languages would therefore mean not only having vast amounts of texts translated, but changing how texts are used throughout the game. All this would have come with a significant cost both in terms of time and money that we had to weigh carefully against any potential gains, and against how we could otherwise spend those resources (e.g. create new content instead). Many of you offered to help with translations, and we’re very thankful for this. However, as you can see, things aren’t as simple, and technical hurdles make any kind of translation unfeasible.

What About a Mac or Linux Version?

Sadly there will not be a Mac or Linux version of Battle Brothers. Building either would pose a host of new technical challenges and compatibility issues that we’re not prepared to deal with given the small size of our team. Also keep in mind that the game can already be played on Linux using the most recent version of Wine and using vcrun2015 with Winetricks.

Work on the Lore & Art Book for the kind people who bought the Supporter Edition is progressing well, and you can expect it to arrive in May. See below for a first preview – still subject to change, of course. 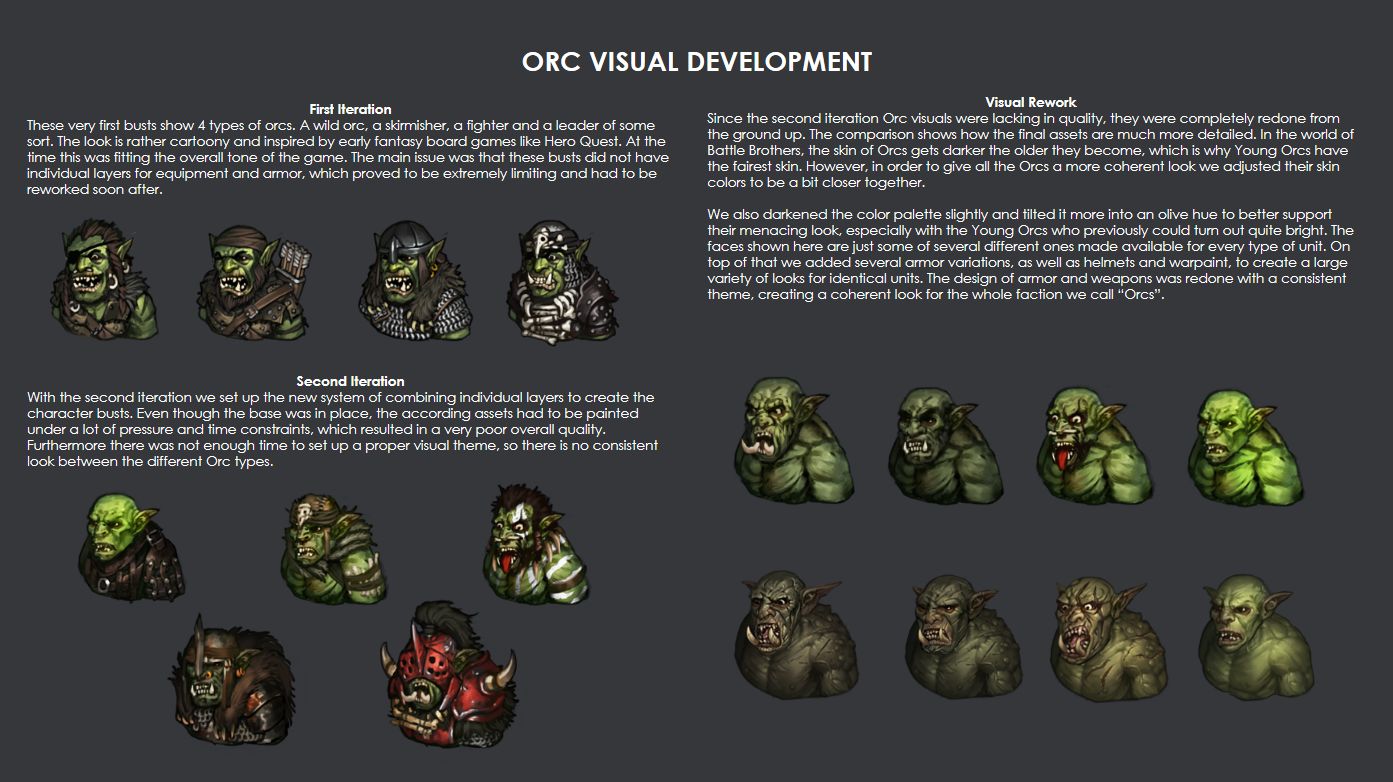