Welcome to our first dev blog on the upcoming ‘Warriors of the North’ DLC. One of this expansion’s major features is going to be a little thing called ‘company origins’, and that’s what we’ll be talking about this week and the next. Let’s dive in!

Until now, there’s been only a single way of starting out in the world of Battle Brothers. Because the game is otherwise designed for replayability, this is an area we really want to tackle with the upcoming ‘Warriors of the North’ DLC, both to further improve replayability and to accommodate different play styles.

The established way of starting out in the world, your company origin, you likely know well by now: your company is nearly wiped out by a brigand named Hoggart, and it’s up to you to rebuild it. This origin remains available in the game, and it’s a good way to start for new players, but it’ll be just one of many possible origins to choose from. For starters, the free update coming with the DLC will introduce a second origin which immediately drops you into the world without having to deal with Hoggart. It’s reminiscent of Early Access days, and it even has the old introductory text and music that some of you may remember. 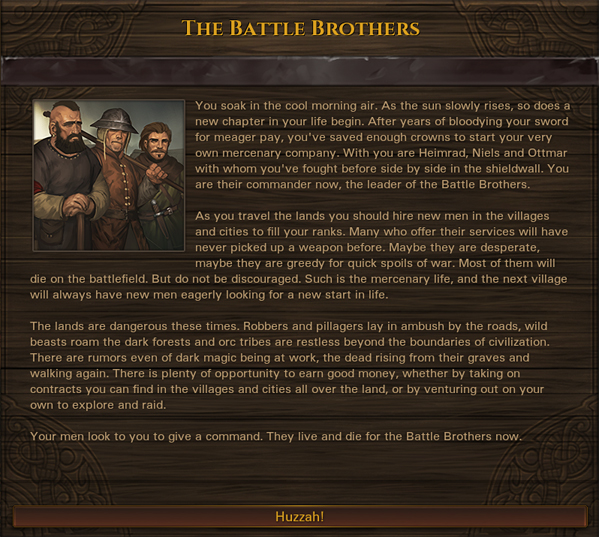 The ‘Warriors of the North’ DLC adds greatly to the selection of origins. Each of those comes with a flavor introduction, different starting characters, equipment, resources, and special rules for your campaign. Some origins change the game more than others, but most of them impact it from beginning to end. Because the game is and always will be fundamentally about leading a mercenary company, all origins will ultimately lead to this – but they do add new challenges, accommodate different play styles, and provide roleplaying flavor. If you own the ‘Beasts & Exploration’ DLC, you’ll also get a bonus origin centered around beast slaying.

Let’s take a closer look at two origins that the ‘Warriors of the North’ DLC adds to the game – just keep in mind that things are in active development and might still change!

If you prefer to overwhelm your enemies with superior numbers, or even just equal numbers in the late game, but still want a balanced game, then the peasant militia might be for you. 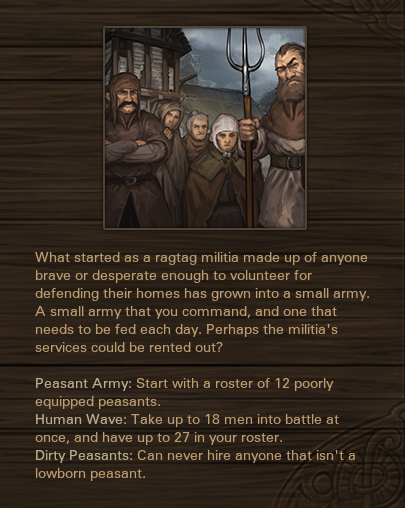 The militia starts not with three companions, but with a full roster of a dozen characters from various civilian backgrounds – daytalers, farmers, butchers, millers, and the like. With these kind of people, you’ll want to rely on numbers, so you’ll be able to field 18 men on the field at once, instead of the usual 12. The downside is that you’ll never be able to hire any noble or high tier combat backgrounds to join your mob of angry peasants. You’ll start with lower renown and crowns, but a home village that idolizes you and gives you great prices.

For a different experience, and some roleplaying flavor, you can also start the game as a wandering cult that worships Davkul. 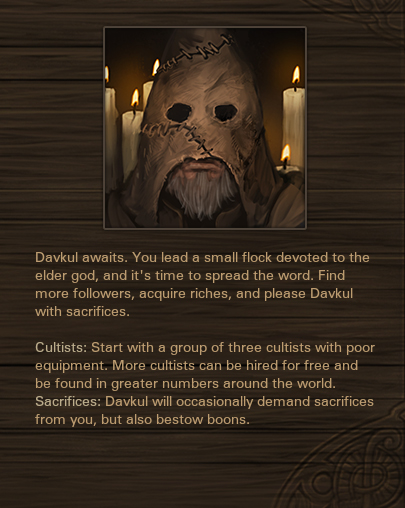 You’ll start with three cultists, and more cultists will join you without any hiring fee. Cultists can be found more often in any settlement, and they may also flock to you in new events. Your god will demand sacrifices, and you’ll be expected to cull the herd and give lives to Davkul in bloody rituals. All cultists will rejoice upon this gruesome occasion, and Davkul may bestow upon them permanent boons. Of course, anyone not a cultist in your company may have a different reaction to the proceedings. Having a special relation to your god will also make certain late game cultist events much more likely to trigger.

There’ll be plenty more origins to choose from, of course. Join us again next week when we explore them in part two of this dev blog!