Last week we talked about what the company origins feature of the upcoming ‘Warriors of the North’ DLC is exactly and looked at several of these origins. This week we continue with a closer look at two more origins that are part of a larger selection for you to choose from. Just keep in mind again that things are in active development and may still change – let’s go!

With an expansion focused on bringing variety and flavor to the northern parts of the map, it’s only fitting that there’d be an origin that has you start in the north as well. Playing as northern raiders let’s you start with veteran raiders that are well-equipped with some of the new nordic and rus inspired armor and helmets which we’ll show in an upcoming blog post of its own. 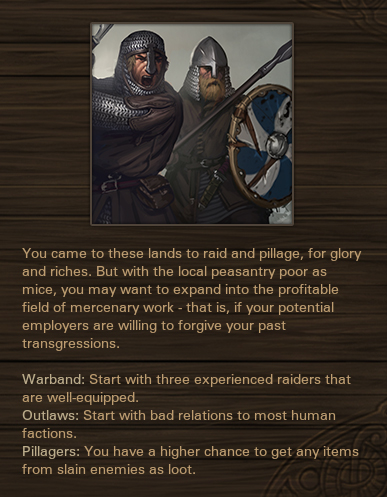 However, you’ll also start as outlaws, which means that 2 out of 3 noble houses are outright hostile, while the remaining one is distrustful. It makes for a challenging start where you rely more on venturing out on your own instead of taking on contracts. And it’s up to you how to proceed: Do you want to mend relations over time and become a proper mercenary company, getting paid by the the noble houses, or do you continue with raiding and pillaging, alienating the nobles further? Fortunately, your men are quite proficient at pillaging, and you’ll have a higher chance to get any equipment dropped by your enemies in battle, so you’ll have to rely less on being able to buy equipment in cities that will most likely just send their militia after you.

For a very different experience of playing the game, and in some way the opposite to last week’s militia origin, have your player character be present on the field of battle. 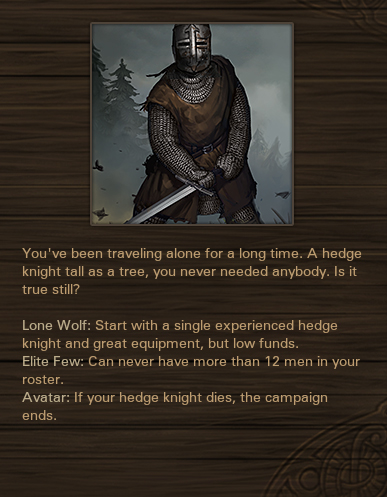 You’ll start with a single well-equipped and experienced hedge knight who is, in a way, your player character. He can’t be fired and he’ll never desert the company, but if he dies, your campaign ends and you lose the game. He’ll be the strongest man in the company for quite a while, but having him in the fray is always a risk, so you’ll have to think carefully on how you want to use him. And because this origin only ever allows you to have 12 men in your roster, there’s no putting him in the backline – you go out there and fight side by side with the rest of your men, or you’ll leave them at a disadvantage and have them call you a coward. Having to defend your player character adds a different layer of strategy to each battle. Despite your character starting out strong, it’s a challenge suited best for experienced players.

There’s more origins to choose from still, but we don’t want to spoil everything, so you’ll have to find out for yourself by playing the game. Join us again next week when we take a look at a different feature of the upcoming DLC!