The upcoming ‘Warriors of the North’ DLC will not just bring more replayability and nordic equipment, but also introduce an entirely new human faction to the game. They’ll come with their own lore, armor and weapons, enemy types and fighting styles to pose a unique challenge to any mercenary commander. Let’s delve in!

During the development of the ‘Beasts & Explorations’ DLC we had this idea for groups of wildmen roaming the northern parts of the map. Essentially, they’d be a different flavor of brigands and use existing assets. Except, maybe we could also squeeze in one new armor if we found the time? Or maybe even two? And so we decided that if we wanted to do them, we’d do them right and dedicate the time necessary to give them equipment and mechanics of their own, their own music, as well as contracts and events to convey their lore and the part they play in the world of Battle Brothers. So here we are, with a ‘Warriors of the North’ DLC in development. 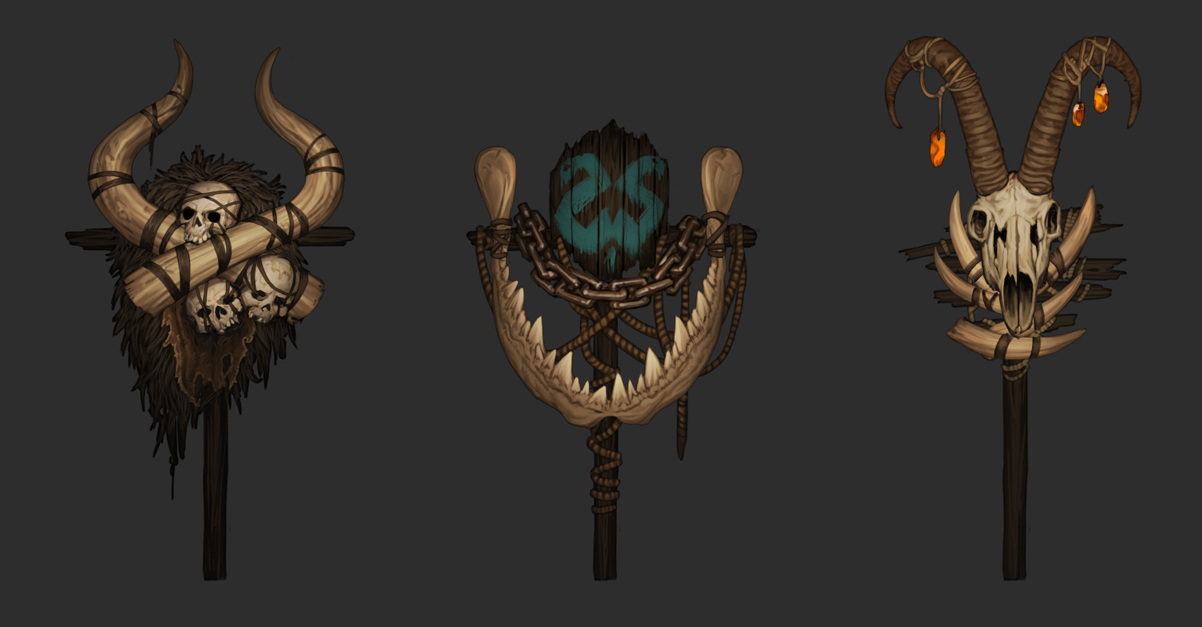 Many hundred years ago, in a different era, an empire of man spanned much of the known world. An empire, not of petty noble houses, but one of a dozen provinces, from the blistering sands of the south to the frozen tundra of the north, of a dozen peoples under one banner. As the empire spread further and further to the north, it became entangled in constant war with countless tribes of barbarians. Some were subjugated by force, some saw opportunity and swore allegiance, others faded into nothingness, but many more remained free; their constant raids and incursions a thorn in the side of the empire.

The empire, as you may know, eventually crumbled under its own weight, and feudal houses emerged from the dust to rule the lands in its stead. Yet, in the very north, the free barbarian tribes remained free still. For them, their own tribe is the beginning and the end, it is bliss in life and death, for their family is holy to them and they believe to sit with their ancestors if they meet their end in this life. They roam the harsh and infertile lands as they have been for hundreds of years, they raid to claim what they need, and they sacrifice their prisoners in bloody rituals to prove their worth to ancestors who ascended to be gods through their deeds in life. But they’re not beasts, and they’re not of alien minds like the greenskins. They’re humans; and while they speak a different tongue, they can be reasoned with, and they know the concepts of honor, and friendship, and truce and bartering. What they do, they have to do in order to survive in the unforgiving lands they inhabit. They follow their old ways to this day. They’re the warriors of the north.

The warriors of the north are ferocious fighters, but with scarce resources and a nomadic lifestyle, they usually don’t have access to the level of equipment that other human factions do. Many of them wear armor crafted from pelts and furs, and while some do boast metal armor, not least because it is a matter of prestige, the harsh climate of the north often has taken a toll on it over the years. Some barbarians even forego armor altogether, and instead paint their bodies with magic runes to call upon their ancestors to protect them from harm.

Their weapons are likewise often crafted from wood and bone, some of the few materials readily available to them, or have been handed down through generations and show signs of wear. Generally, all barbarian weapons have somewhat lower base damage values, but a higher percentage of damage that ignores armor than comparable weapons in the game. Of course, all their armor and weapons are lootable and equippable by you, too – and there’ll be named variants as well!

In combat, a barbarian warband doesn’t bother with formations, and they have no backline with polearms or dedicated archers. They are a horde of ferocious warriors in a constant shuffle of everyone trying to bring their weapons to bear against the enemy. They’ll shower you with throwing weapons, they run towards your line, and they make ample use of the ‘Adrenaline’ perk to overwhelm you before you can even strike back. They don’t fear death the same as other humans do, so they are not easy to break, and getting hurt will only further incite their barbarian wrath.

Because a barbarian warband is but a loose collection of individuals, unified only in their tribal bonds and their willingness to fight for their place in both life and afterlife, their unit types are quite diverse in terms of equipment and perks, as you’ll see in a future dev blog.