As you’ve already learned here, the southern city states are places where medieval science flourishes. Advancements in medicine, astrology and alchemy are unlike anything found in the north. You’ve also learned a good deal about the alchemy part already, but now it’s time to look at their finest alchemical achievement: Gunpowder weapons. This requires a bit of an introduction, so let’s start!

Battle Brothers is set in an era spanning the early to high medieval ages as we move from Scramasax to Greatsword and across all the tiers of equipment. There’s a few outliers, such as the Fencing Sword, but by and large this dictates what kind of equipment may make its way into the game. It’s also the reason why there isn’t any full-blown plate armor available. Naturally, the same restrictions apply to any gunpowder weapons we’re going to introduce.

Until the ‘Blazing Deserts’ DLC, the setting was limited to draw inspiration from Europe. Gunpowder weapons weren’t much of a thing there at the time, but it doesn’t mean that other cultures weren’t employing them. The gunpowder weapons we’re going to introduce aren’t the muskets that many people may immediately think of, because these clearly would fall out of the era that Battle Brothers covers. Instead, they are very early firearms based on what eastern cultures actually had available at the time. 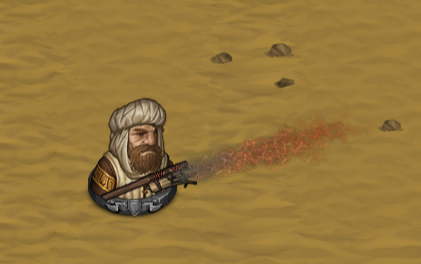 Gunpowder weapons work differently from any other ranged weapons in the game and fill their own niche. Their attacks don’t target individual opponents, but instead hit an area of effect covering multiple tiles and always hit both body and head. Also differently from any other weapons, the skill of a shooter and the defenses of a target don’t determine whether a target is hit at all, but rather for how much damage it is hit. The higher the skill of a shooter, the more damage a target receives. The higher the defenses of a target, the less damage it receives. For example, while you’ll have a hard time dodging a load of shrapnel being shot at you in its entirety, a shield offers good protection against it and will reduce any damage you might otherwise take. 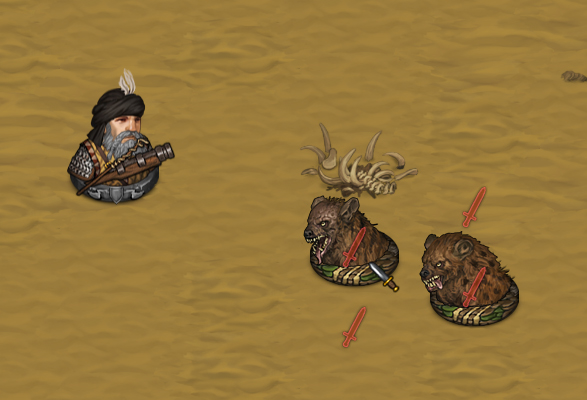 Because it’s important to understand the area of effect an attack with a gunpowder weapon will cover, not least to avoid friendly fire, we’ve revised how these are displayed in the game. No matter if a tile is empty or not, you’ll now always see which tiles are in the line of fire. Naturally, this goes for any melee attacks already in the game as well. So with all that said, let’s take a closer look at the gunpowder weapons available for you to use.

The Firelance is an explosive charge mounted on a wooden stick. Once ignited, it will spew fire in a straight line covering multiple tiles in front of the shooter. It has limited range, but can still be safely fired from the backline without hitting your own men. Victims caught in the jet of fire may suffer one of the new burning injuries.

The Firelance has a single use in combat, after which it is burned out and useless. Like throwing weapons, it is automatically refilled after each battle and can be used again in the next one. Firelances are particularly useful to soften enemy ranks in deep formation, as they are able to set ablaze opponents in their backline that are out of reach of most polearms or Greatswords and are guaranteed to hit. The conscripted armies of city states regularly make use of them before battle lines clash.

The Handgonne is a massive cast iron cannon with a wooden handle. It fires shrapnel in a cone and can hit multiple targets with one shot for devastating damage, but at less range than either bow or crossbow. Similar to a crossbow, it has to be reloaded after every shot with shrapnel and powder carried in the ammunition slot. As it is heavier and more cumbersome to reload than even a crossbow, a character carrying a Handgonne can not fire, reload and move in the same turn.

The Handgonne excels against multiple lightly armored targets, but can also be effectively employed for damaging several more heavily armored opponents at once. Because the Handgonne covers a wide cone, smart positioning and watching out for friendly fire is important. Used right, it can quickly even the odds if overwhelmed by superior enemy numbers – after all, the more enemies, the more targets to hit. And any target thus hit may suffer both piercing and burning injuries.