Last week we’ve learned about gunpowder weapons. In this conclusion of our dev blog series exploring the southern city states, we take a look at their remaining troop types that make use of these weapons. Onwards!

Armies of the city states train men in the use of the Handgonne, a metal barrel with a long wooden handle that uses gunpowder to propel shrapnel in a wide cone. Below you see Gunners armed with a Handgonne. Its visuals have been revised since last week to make it more readily apparent that this is an unreliable early firearm and not some kind of blunderbuss. 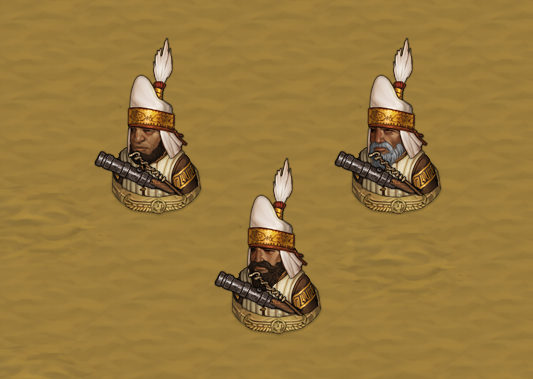 Because their weapons cover a cone, Gunners excel against tightly packed enemy formations. But because their weapons also have a very limited effective range, they often have to position themselves right behind their own frontline, leaving them vulnerable to polearms and firearms themselves. The city states do not make use of traditional ranged weapons like bows and crossbows, but desert raiders – essentially the southern equivalent of brigands – make use of a new composite bow with advantages and disadvantages over northern bows.

Malnutritioned slaves toil in the fields and quarries beneath a city of golden domes that reflect the glory of the Gilder. It’s a city of architectural marvels made possible by the application of mathematics and engineering. These sciences are taught in several colleges between the city states, and their graduates make for sought-after engineers. They devise intricate water pumps and fountains that create a private oasis in the gardens of wealthy citizens, and they produce mechanical toys that makes eyes go wide.

But where a child sees but a toy, a man with ambition sees what can become a weapon. And so it is that engineers of the city states also devise terrible weapons of war, and that they operate them on the battlefield to rain down destruction on the enemies of men with ambition. 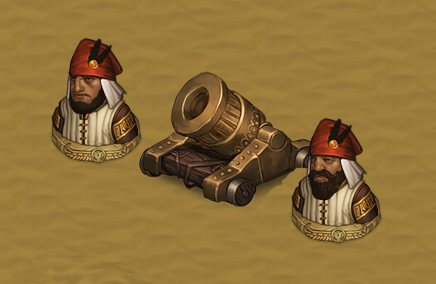 As you face engineers in battle, they don’t pose much of a threat by themselves. In fact, they try to stay as far away from the frontline as possible. Their role is not to engage the enemy in direct combat, but to operate the technical marvel that is the mortar. A bronze-cast muzzle-loaded piece of artillery, the mortar is able to fire every other round as long as it is operated by at least one engineer next to it.

The mortar has enough range to cover the whole battlefield, but it’s entirely immobile during combat. It fires explosive shells that cover a large area of effect, but it’s highly inaccurate. The howling sound of incoming mortar shells has as much a psychological impact on combatants as it has an explosive impact, or perhaps even more so. Characters in the blast zone lose morale and receive the new ‘Shellshocked’ status effect that lowers their efficiency in combat, but receive only moderate physical damage.

Luckily, because the mortar is heavy, relatively immobile and hard to operate, it’s an uncommon weapon used only with large armies, and one that you’ll most likely face only as part of the new ‘Holy War’ late game crisis.