The bestiary of the south grows by another entry as we take a look at a scaled and slithery opponent this week: The Serpent. Read on!

While much of the south is made up of barren wasteland, the seas of sand are dotted with green islands that promise a treasure most sparse in these parts: water. Water means life in the great deserts, and so any caravans seeking to travel them will hop from one oasis to the next. They are lush refuges teeming with life, but also with danger, for they are home to a slithery predator: The Serpent. 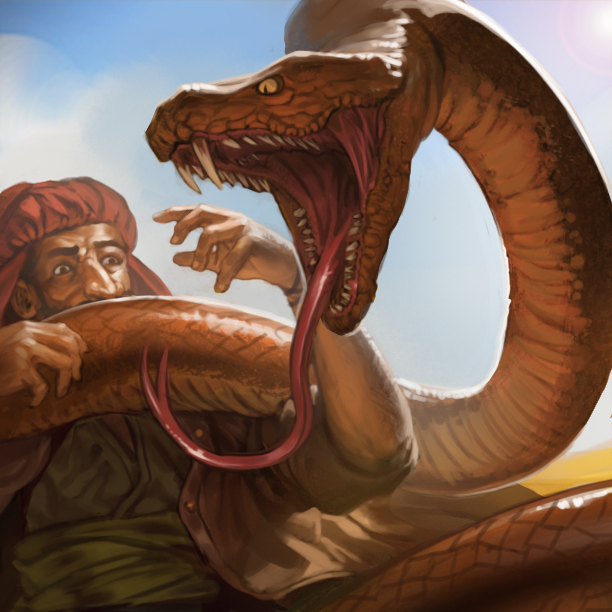 The Serpent is a large non-venomous snake that preys on animals and humans alike in and around oases. Well-camouflaged on the ground, they are not always easily spotted from afar, but they are also slower on the world map than other beasts. Using their forked tongue to sample the air, they have a directional sense of smell and can hunt equally well in the darkness of night as they can in the bright of day.

In battle, a Serpent will seek to wind itself around their prey, to constrict their movement and breath, and to drag them away from allies where they can be more easily killed in isolation. Similar to human opponents using the ‘Hook’ skill of Billhooks, Serpents can pull apart a formation, drag your men into being surrounded by several opponents, and expose your backline. Although Serpents are not venomous, they will attack using their fangs until their victim is either dead or limp enough to be devoured whole.

Serpents can be dangerous for anyone traveling the south, but they also offer an opportunity for earning crowns. The body of a Serpent is covered with overlapping scales of different colors, and some serpent skin, particularly rainbow colored scales, is worth a lot to the upper class of the city states that seek to flaunt their wealth. A mercenary captain will often find contracts to hunt down Serpents, whether to turn them into expensive-looking slippers or simply because too many a caravan hand lost their live along a trade route so that business begins to suffer. The shimmering scales are quite resistant to heat and fire, and a taxidermist can also craft an armor attachment out of these for use with your own men.