The free ‘Of Flesh and Faith’ DLC coming to Battle Brothers on March 10th will introduce two new origins to the game. We already looked at the Anatomists  and their ambition to find salvation in knowledge about the flesh last week, so today we’ll take a closer look at the Oathtakers, who seek their salvation in faith. Let’s head on!

Oathtakers are knightly warriors beholden not to liege lords, but to the ideals and teachings of their founder, the late Young Anselm. Though his own time in the world was tragically cut short, death only made him immortal as he lives on as a paragon of righteousness and virtue in the minds of his followers. His teachings provide guidance, and his skull is revered as a holy relic, a provenance of courage in the sea of chaos that is the world of Battle Brothers. To walk the path of Young Anselm is to take oaths to right the wrongs in this world, and even to sacrifice oneself for the greater good if need be. Essentially paladins, Oathtakers are also on a quest to make whole the shattered skull of their founder. All that stands in their way is a nemesis born in the schism of Young Anselm’s death, a heresy which must be found and destroyed. 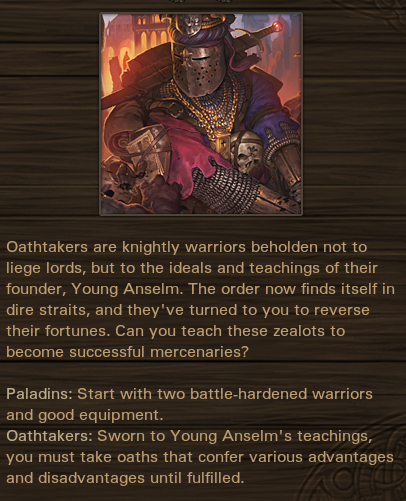 This dedicated lot starts their quest with two skilled warriors and good equipment. Uniquely among all origins in the game, they also start out with a company banner right on day one, as well as a relic which replaces the sergeant’s sash. The Oathtakers origin does not have access to ambitions like other origins do, but instead has their very own system of taking oaths. 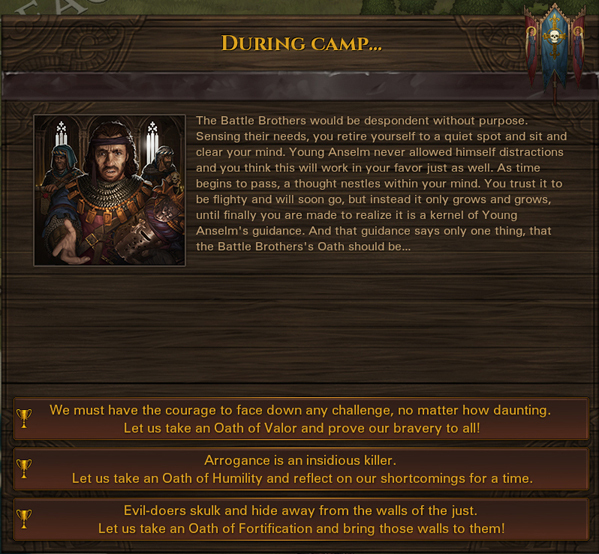 Every ten days it falls upon you to choose one from between several oaths that the company should take. This oath will then be active for the next ten days and grant you both advantages and disadvantages, called boons and burdens. For example, having pledged the Oath of Honor, your men will start every battle with confident morale but can not use any ranged weapons or throwing tools. Having pledged the Oath of Vengeance instead, your men will benefit from substantially increased attributes in battle against greenskins, but suffer penalties in battle against other factions.

Once ten days have passed and the oath is completed, you’ll gain a fixed amount of renown. You can gain additional renown by completing an objective that depends on both the oath chosen and the level of difficulty that you’re playing at. For example, with the Oath of Honor you gain additional renown if your men manage to kill opponents in one-on-one fights, without your other men interfering. There’s a total of twelve different oaths in the game, and you can choose the same oath multiple times over the course of a campaign, just not twice in a row. 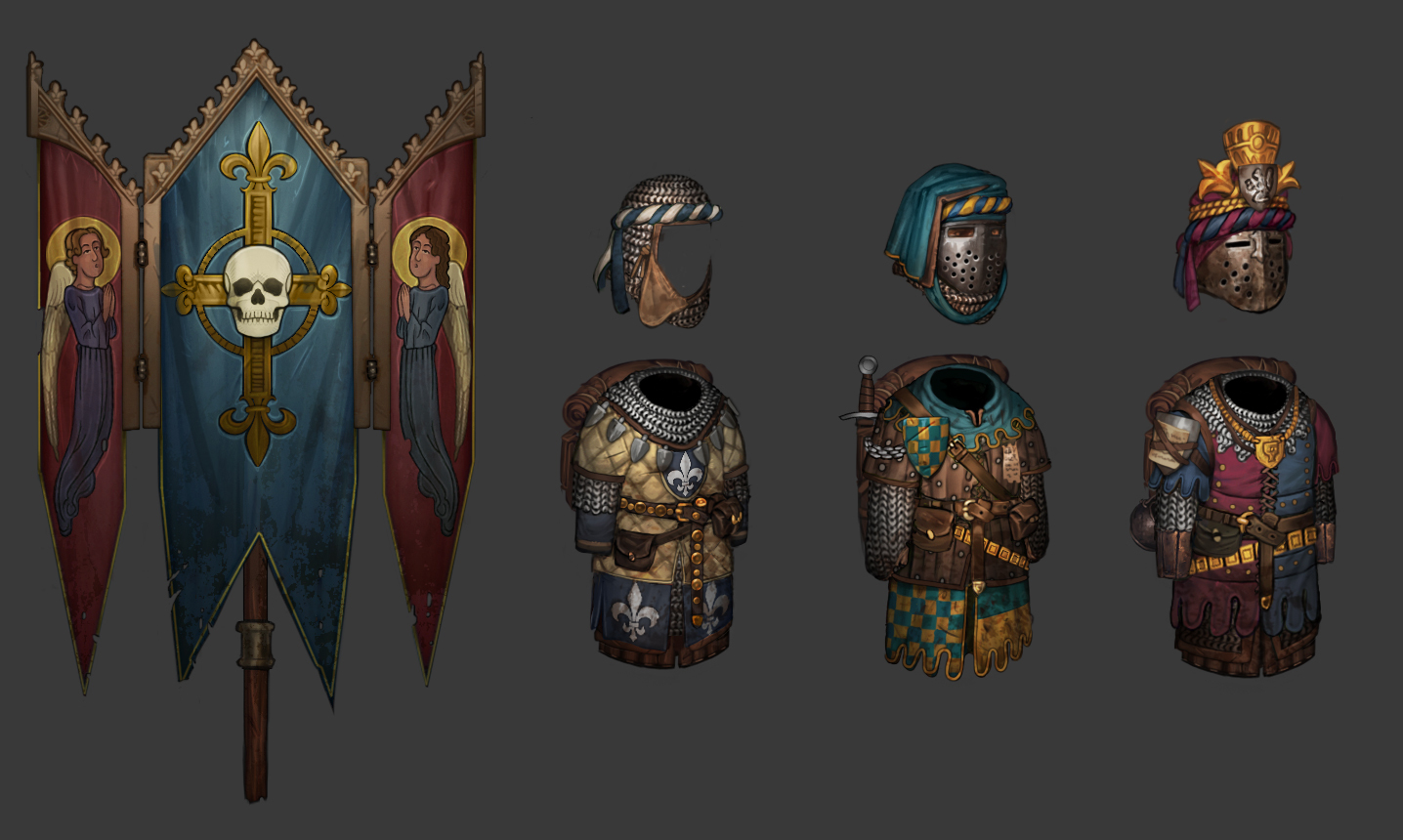 Oathtakers are as fashionable as they are dedicated, so they come with their own adorned armor and helmets, and even a brand new and appropriately sacred-looking banner to hoist for your company. Even if you’re playing with another company origin, you can hire Oathtakers as a new character background to get access to their equipment and potentially strong members for your roster. And if you’re playing as Oathtakers, you’ll get to experience a whole bunch of new events along their quest to mend the shattered relic of their founder.