Overhauling the UI is mostly done now, save for a few minor quirks and a single screen left: the character screen. Here’s where things get interesting, because we’re not just giving it a facelift but are introducing an extended roster and the ability to change the starting formation in battle to your liking. Let’s find out more!

That’s right – you’re no longer limited to have but twelve characters in your employ. While the maximum number of characters you can lead into battle is, for reasons of balance and usability, still twelve, you now also have a reserve roster to draw from. Characters can be dragged & dropped easily between combat duty and reserve, and indeed placed at the exact spot of the formation you want them to be in order to best fulfill their roles.

The new ability to have a reserve roster allows you to keep specialists around (especially as we overhaul the perk trees later on), rotate injured characters in and out of active duty (especially with the more complex injury mechanics we’re going to introduce soon) and always have fresh meat gather experience so that losing people in battle doesn’t hit you quite as hard. Having a deep roster is also a matter of cost, of course, so it’s up to you to decide whether you want to funnel all your crowns into a small roster, or share it between all the characters of a very deep roster where no one is unexpendable.

What else is happening?

With the new UI taking shape, the most expressive of button art also received a make-over. Here’s a before and after of the ‘loot all’ button.

Similarly to how the tutorial contract features illustrations, we’ve begun to create a whole set of artwork to use with events and contracts in order to further support the game’s atmosphere. The images below give a good idea of where we’re going with these. Take note, though, that they’re all still work-in-progress and not quite finished yet. 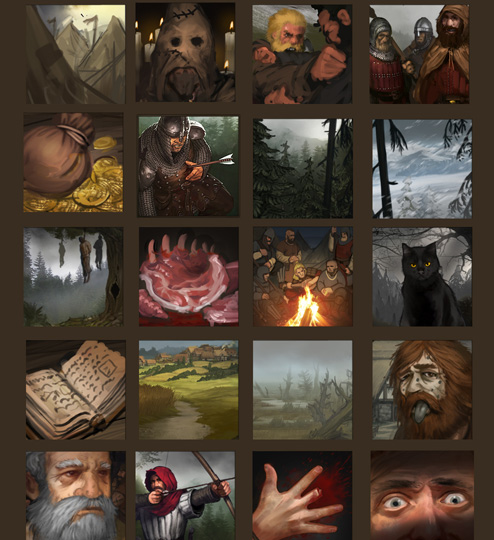