Things are coming together, and we’ll announce a release date for the ‘Blazing Deserts’ DLC in next week’s devblog! In the meantime we expand on a feature that many of you have asked us for more details on: The Arena. To arms!

While northerners will duel for honor, southerners do so for the entertainment of the masses, and not always willingly. Arena fights are to the death, or at the very least incapacitation, and in front of crowds that cheer for the most gruesome manner in which lives are dispatched. It is a different way to earn money with advantages and disadvantages over mercenary contracts. The arena is a building found in the city states, and entering it you start an arena contract. 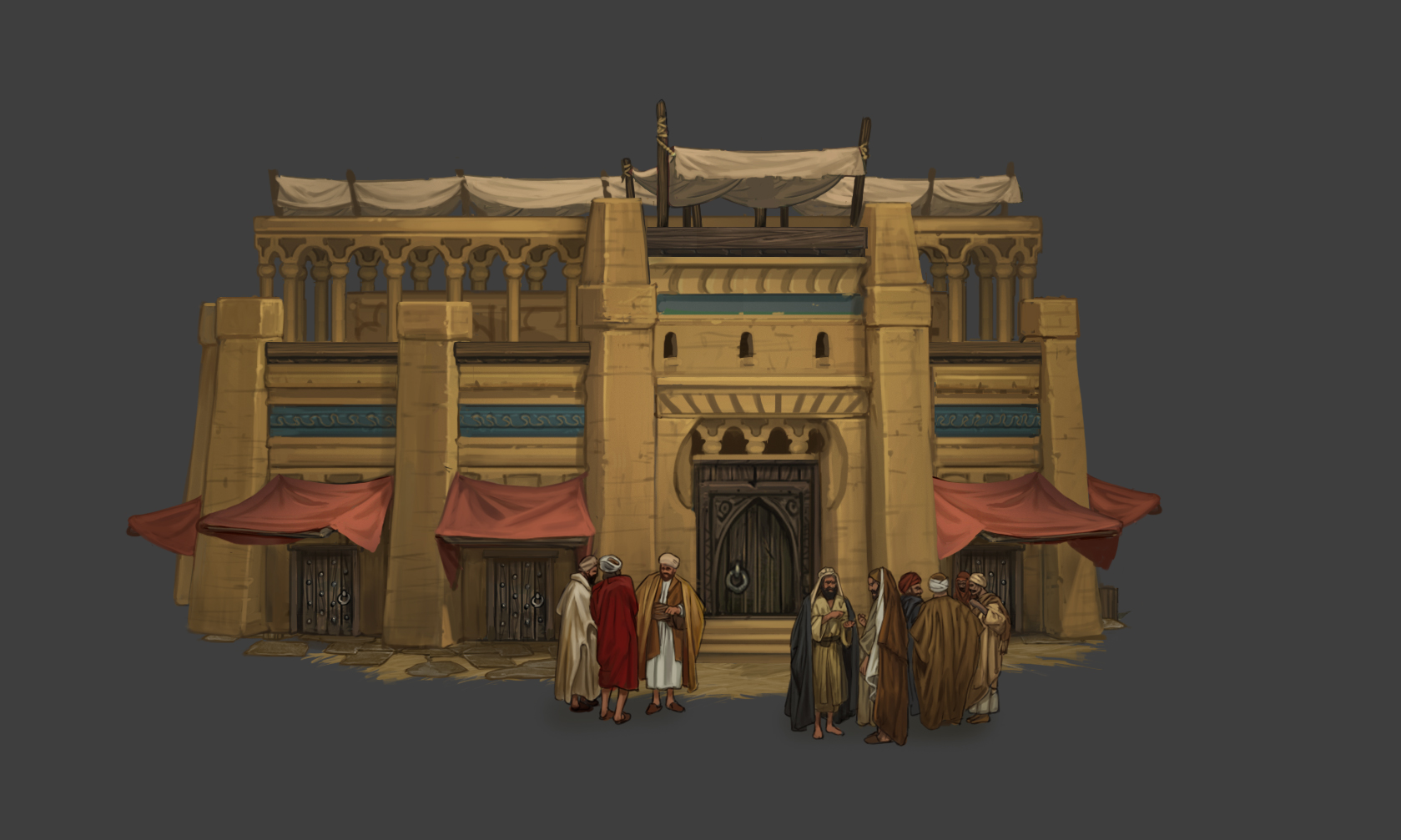 Unlike with mercenary contracts, in arena matches you’re limited to fight with just three men of your choice against various opponents. Also unlike mercenary contracts, you’ll know exactly which and how many opponents you’re about to face – a certain number of beasts, slaves, captured desert raiders or professional gladiators, for example. If the upcoming arena match is not to your liking, you can simply wait until the next day and the next arena match. There’s no lengthy travelling involved, nor ambushes along the road, and you’re paid well for quick battles – but only if you win. If you’re looking for a quickstart into the gladiator lifestyle, the ‘Gladiators’ origin is a good pick. 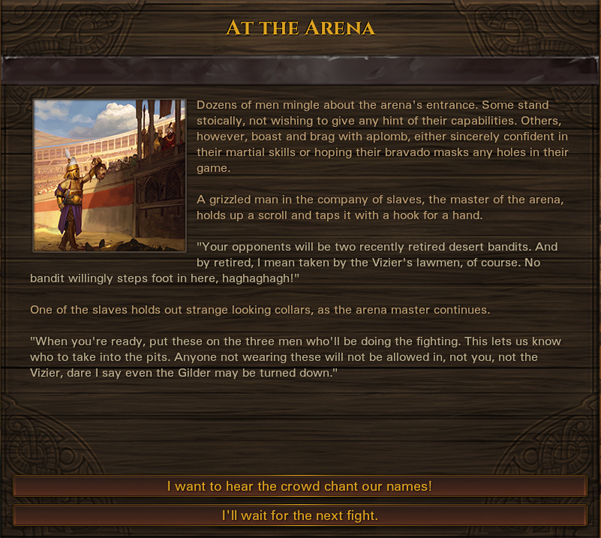 Once you accept to fight in the arena, you’re given arena collars to equip up to three men of your choice with that are to partake in the match. Because an arena collar is worn in the accessory slot, this also means that you can’t take wardogs into the arena with you – you’ll have to do the fighting yourself! 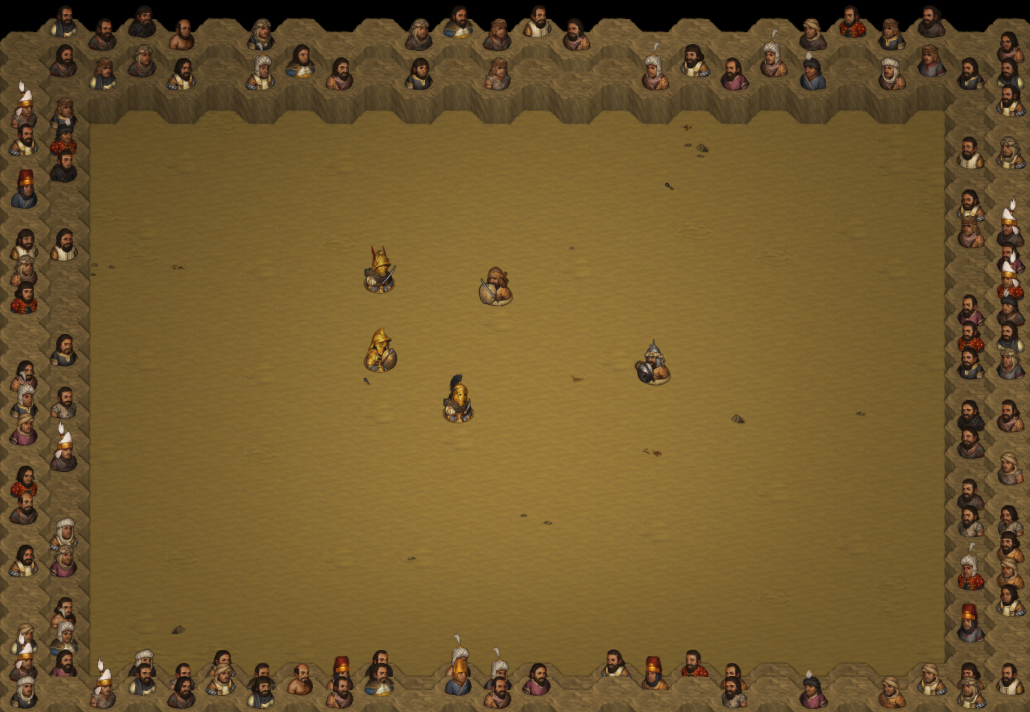 Arena bouts are fought on a smaller map than regular battles and in front of cheering spectators. Your every move is commented with cheers and boos; missed that attack with a 95% chance to hit? People will gasp alongside you. Killed that beast with one swift stroke? People will cheer and applaud. Flee from your opponents? People will boo, because they paid for a match to the death and expect you to die proper bloody. Unlike with mercenary contracts, you can’t retreat once a battle has started and you won’t be able to loot your victims after the battle has ended. But if your men survive long enough, fighting in the arena will earn them unique traits as they climb the ranks from pit fighter to veteran of the arena. Traits that aid them both inside and outside of the arena. 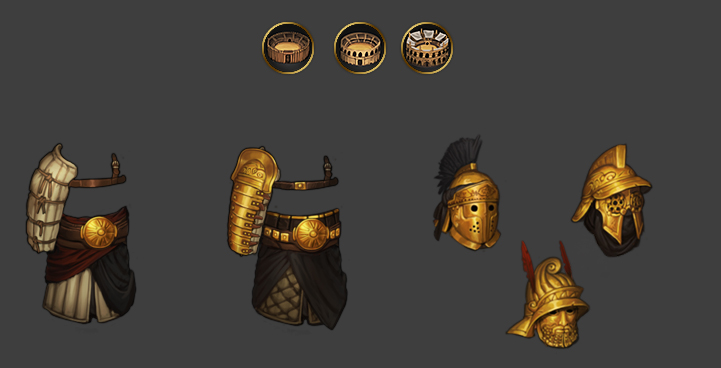 Every fifth arena match is a special one; you’ll face harder opposition than usual in front of particularly important spectators that crave entertainment most thrilling, but you’ll also earn a piece of rare gladiator equipment not otherwise available in the game if you manage to win. Because of the perils of the gladiator profession, hiring a Surgeon for your retinue of non-combat followers may be a good investment to ensure that your men survive after a lost bout to entertain the crowd another day.