As you may know from studying our roadmap, the upcoming update will also overhaul some minor worldmap mechanics. This week we’re taking a look at what’s going to change with the mood system and desertion mechanics. Let’s go!

Battle Brothers is, of course, a game about managing a mercenary company. There’s a bunch of things to manage, more so now with the introduction of injuries, but one thing that never really took off as a full-fledged gameplay mechanic is managing the morale and discipline of the company on the worldmap – the company’s mood. Balancing the needs of your men against one another and against the needs of the company should be part of your job as commander, so we’re doing a couple of changes to shape the mood mechanics into a more integral part of gameplay.

The mood of all your men is now more closely tracked and at all times visible both in the roster view and in detail as a status effect. Every day, a character’s mood trends towards roughly neutral – more so if they’re an optimist and in a bad mood, or they’re a pessimist and in a good mood. Events, and your choices on how to treat your men and others, can change the mood of characters drastically. In addition, characters react to more things that are just part of their mercenary life – for example, a battle won will raise the mood, a comrade lost will lower it, and being stuck in reserve forever may make a character feel useless depending on their personality.

Your men in Battle Brothers have their own thoughts on how things are going for them, and their mood now better reflects this. To make it easier for you see exactly what is influencing a character’s mood, the last couple of mood changing events, positive or negative, are always listed when hovering over the mood icon. 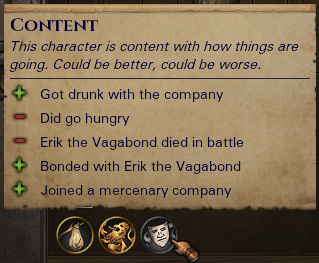 So that’s how mood changes – but what about its effects? The biggest change is with how desertion now works. Characters no longer just randomly leave you if you can’t pay or feed them just once. Instead, their mood suffers. A greedy character will take more offense on not being paid, as will a gluttonous character when having to go to bed hungry, whereas a spartan will be a bit more lenient on this. Once a character’s mood drops to the lowest state, angry, there’s a chance that they’ll desert you. Again, character traits influence this; the chance of desertion is lower for loyal characters and higher for disloyal characters.

By coupling desertion with mood mechanics, characters may now choose to desert the company for other reasons than just not getting their due wage, but only after giving you some time to react and do something about whatever their qualms may be. The better you treat your men, the better their morale in combat, and the more of a safety cushion you have until thoughts of desertion even enter their minds. Pay for a round in the tavern every now and then, the lads have earned it and it will raise their spirits!